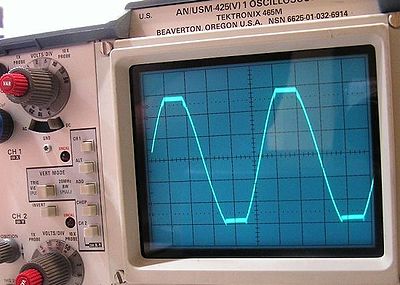 The altered peaks and troughs of the sinusoidal waveform displayed on this oscilloscope indicate the signal has been "clipped."

Clipping is a form of waveform distortion that occurs when an amplifier is overdriven and attempts to deliver an output voltage or current beyond its maximum capability. Driving an amplifier into clipping may cause it to output power in excess of its published ratings.

Many electric guitar players intentionally overdrive their guitar amplifiers to cause clipping in order to get a desired sound (see guitar distortion).

Amplifier power ratings are typically established by driving the device-under-test to the onset of clipping, to a predetermined distortion level, variable per manufacturer or per product line. Driving an amplifier to 1% distortion levels will yield a higher rating than driving it to 0.01% distortion levels.[1] Similarly, testing an amplifier at a single mid-range frequency, or testing just one of two channels, will yield a higher rating than if it is tested throughout its intended frequency range with both channels working. Manufacturers may use these methods to market amplifiers whose published maximum power output includes some amount of clipping in order to show higher numbers.[1] For instance, the Federal Trade Commission (FTC) established an amplifier rating system in which the device is tested with both channels driven throughout its advertised frequency range, at no more than its published distortion level. The Electronic Industries Association (EIA) rating system, however, determines amplifier power by measuring a single channel at 1,000 Hz, with a 1% distortion level—1% clipping. Using the EIA method rates an amplifier 10 to 20% higher than the FTC method, at the cost of audio fidelity.[1] 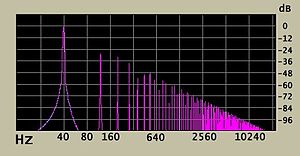 In power amplifiers, the signal from an amplifier operating in clipping has two characteristics that could damage a connected loudspeaker:

As a result, many amplifier designers have incorporated circuits to prevent clipping. Such circuits compare the input signal to the output signal to detect the presence of extra power caused by distortion. The simplest circuits act like a fast limiter, which engages after about one decibel of clipping is detected. A more complex circuit, called "soft-clip", was used from the 1980s onward to limit the signal at the input stage. The soft-clip feature begins to engage prior to clipping, for instance starting at 10 dB below maximum output power. The output waveform retains a rounded characteristic even in the presence of an overload input signal as much as 10 dB higher than maximum specified.[2][3]

This PCM waveform is clipped between the red lines
Main article: saturation arithmetic

In digital signal processing, clipping occurs when the signal is restricted by the range of a chosen representation. For example in a system using 16-bit signed integers, 32767 is the largest positive value that can be represented, and if during processing the amplitude of the signal is doubled, sample values of, for instance, 32000 should become 64000, but instead they are truncated to the maximum, 32767. Clipping is preferable to the alternative in digital systems—wrapping—which occurs if the digital hardware is allowed to "overflow", ignoring the most significant bits of the magnitude, and sometimes even the sign of the sample value, resulting in gross distortion of the signal.

As seen on the oscilloscope, the wave resulting from the clipping is not a full sine wave. To avoid this, the overall level of a mix can be lowered, or a limiter can be used to dynamically bring the levels of the loud parts down (for example, bass and snare drums).

It is not simple to eliminate all clipping, as filtering (e.g. a high-pass filter) can align various frequencies in such a way as to create excessive peak outputs. The excessive peaks may become clipped even though the amplifier can play any single sine wave without clipping. As such, some audiophiles will use amplifiers that are rated for power outputs over twice the speaker's ratings.

It is preferable to avoid clipping, but if a recording has clipped, and cannot be re-recorded, repair is an option. The goal of repair is to make up a plausible replacement for the clipped part of the signal.

Complex hard-clipped signals (recorded at CD resolution or less) cannot be restored to their original state because the information contained in the peaks that are clipped is completely eliminated. Soft-clipped signals can be restored to their original state to within a case-dependent tolerance because no part of the original signal is completely eliminated. In this case, the degree of information loss is proportional to the degree of compression caused by the clipping. Lightly clipped bandwidth-limited signals that are highly oversampled have a high likelihood of perfect repair.[4]

Several methods can partially restore a clipped signal. Once the clipped portion is known, one can attempt partial recovery. One such method is interpolation or extrapolation of known samples. While this is only an approximation of the original, the subjective quality is usually improved, sometimes with no audible difference.[citation needed]

Other methods may also be used. One of the methods in CuteStudio Declip, for example, works by copying the signal directly from one stereo channel to another, as it may be the case that only one channel is clipped.

In analog audio equipment, there are several causes of clipping:

Some audiophiles[who?] believe that the clipping behavior of vacuum tubes (especially when used with little or no negative feedback) is superior to that of transistors, in that vacuum tubes clip more gradually than transistors, resulting in harmonic distortion that is generally less objectionable.[citation needed] This gradual onset of clipping is known as gain compression or "soft clipping". Circuits can be designed using either tubes or transistors to achieve this effect, and the behavior can be simulated with digital processing.

Clipping in a circuit can be detected by comparing the original input signal with an output signal that has been adjusted for changes in applied gain. For instance, if a circuit has 10 dB of applied gain, it can be tested for clipping by attenuating the output signal's gain by 10 dB and comparing it to the input signal. If the circuit is driven into clipping, the attenuated output signal will show less voltage in the comparison. The electrical offset between the two signals can be used to illuminate clipping detection indicators, such as a red LED, and can be used to decrease the gain of a preceding circuit so that the level of clipping distortion can be limited.[5]