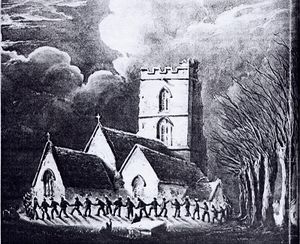 Clipping the church at Church of St Lawrence, Rode. Painting by W. W. Wheatley in 1848

Clipping the church is an ancient custom that is traditionally held in the United Kingdom on Easter Monday or Shrove Tuesday or a date relevant to the Saint associated with the church. The word "clipping" is Anglo-Saxon in origin, and is derived from the word "clyppan", meaning "embrace" or "clasp".[1] Clipping the church involves either the church congregation or local children holding hands in an outward-facing ring around the church. Once the circle is completed onlookers will often cheer and sometimes hymns are sung. Often there is dancing. Following the ceremony a sermon is delivered in the church and there are sometimes refreshments.[2] Currently, there are only a few churches left in England that hold this ceremony.[3]

Little is known about the history of clipping. It was rumored to have origins in some type of Pagan custom, but nothing has been substantiated. Even allowing for adaptation, what is known is clearly a Christian tradition. The earliest known written mention of it dates from 1825 in a description of the ceremony given by "L.S." in The Every-day Book, a recounted memory of his childhood.[4] Because of this reference, it is thought that the ceremony might have undergone a revival in the early 19th century. It was a custom in several parishes in the Midlands, having died out in various places later in the 19th century. But it was still performed widely across the country, from Yorkshire to Wiltshire and Derbyshire, as well as Birmingham, Somerset and Shropshire.[5][6]

It was revived at St. Peter's Church, Edgmond, Shropshire in 1867, and continues there to the present day.[7] St. Mary's Church in Painswick in Gloucestershire is one of a few other churches that perform this custom, on a Shrove Tuesday, and today it is performed by children.[3] Other churches that hold similar ceremonies include Burbage Parish Church, St Mary's Church, Wirksworth, and Guiseley Parish Church.[8][9]

At St Peter’s Church in Tankersley, Barnsley in the diocese of Sheffield it has continued annually since 1926.[10] The service of Cyppings is held annually on the second Sunday following St Peter’s day (29 June). Yeclepping is an ancient term meaning ‘embracing’. Christians adopted this tradition to show their love for their church and the surrounding people. There are not many parishes that honour this ancient custom and all of them appear to honour it on a different day. It would appear that that some parishes observe this tradition on around the time of their Patronal festival and at St Peter’s; in Tankersley the Rector revived the tradition. The feast is celebrated on the 2nd Sunday following St Peter’s day (29 June). The reason for this is not far to seek. When the new ‘Kalendar’ was changed, by omitting 11 days, the good people of Tankersley neglected (or did they refuse) to change the time-honoured day of their festival. Another important fact was that in the year of 1800, it was not considered a leap year and this interjected another day. At Tankersley, there is a service held in the parish church followed by the congregation trouping out to form a ring around the church, They sing a Hymn played by a Trumpeter and in the case of St Peters’ of Tankersley it is the hymn ‘We Love thy place o God’. A prayer is then said with the congregation facing the church and then the congregation all face outwards to the world where they pray for the wider community and the world. Tankersley Church is built on foundations of an earlier place of worship which goes back to Saxon times. (indeed the battle of Tankersley Moor (in Oliver Cromwell’s days) was fought in this area and a cannonball from this battle is on show in the church. There is also a mention of a Rector of Tankersley in the Domesday Book.

St Andrew's Church, Wissett have revived the tradition of Clipping since about 1995. When the church is fully embraced, people from Wissett and the wider benefice sing Lord of the Dance. The church is clipped annually on Shrove Tuesday and this is followed by a serving of cordon bleu pancakes in the village hall.[11] It is an ecumenical occasion and involves musical accompaniment from a Salvation Army band.

At the Church of St Lawrence at Rode, Somerset the circle face inwards dancing left and right before rushing towards the church with a cheer.[12]