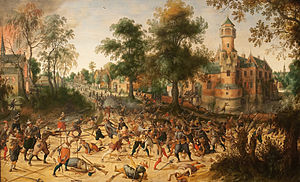 Among many types of fighting encompassed by the general term close combat include the modern terms hand-to-hand combat and close quarters combat (CQC). Close combat occurs when opposing military forces engage in restricted areas, an environment frequently encountered in urban warfare. Military small unit tactics traditionally regarded as forms of close combat include fighting with hand-held or hand-thrown weapons such as swords, knives, axes, or tools.

In modern times, (since World War II), the term "close combat" has also come to describe unarmed hand-to-hand combat, as well as combat involving firearms and other distance weapons when used at short range. William E. Fairbairn, who organized and led the famous Shanghai Riot Squad of the Shanghai Municipal Police, devised a system of close-combat fighting for both soldiers and civilians which bears his name, "the Fairbairn System", incorporating use of the handgun, knife, and the Defendu martial art fighting technique. Since that time, the term "close combat" has also been used to describe a short-range physical confrontation between antagonists not involved in a military conflict, for example in riots and other violent conflicts between law enforcement personnel and civilians.

CQC techniques have been taught for thousands of years by military formations as part of an overall tactical doctrine, both for offensive as well as defensive purposes. The bayonet charge is a typical example of a close combat technique incorporated as part of an offensive tactical concept.

Since World War I, the concept of close combat as an offensive tactical doctrine has evolved from the bayonet charge to more sophisticated concepts such as the use of elite shock forces, first popularized by the German Army through their use of stormtroop tactics.