From Infogalactic: the planetary knowledge core
Jump to: navigation, search
For the community in Texas, see Close City, Texas. 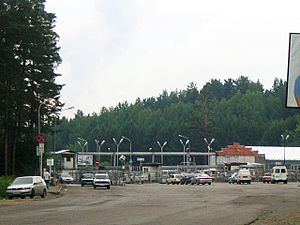 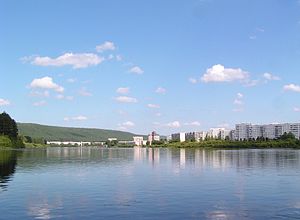 A closed city or closed town is a settlement where travel and/or residency restrictions are applied so that specific authorization is required to visit or remain overnight.

They may be sensitive military establishments or secret research installations which require much more space or freedom than is available in a conventional military base. There may also be a wider variety of permanent residents including close family members of workers and/or trusted traders who are not directly connected with its obscured purposes.

Closed cities are a feature of heavily militarized countries and secretive regimes, and many still exist in the successor countries to the Soviet Union. In modern Russia, such places are officially known as "closed administrative-territorial formations" (закрытые административно-территориальные образования, zakrytye administrativno-territorial'nye obrazovaniya, or ЗАТО ZATO for short).

Sometimes closed cities may only be represented on classified maps which are not available to the general public. In some cases there may be no road signs or directions to closed cities, and they are usually omitted from railroad time tables and bus routes.

Sometimes closed cities may be indicated obliquely as a nearby insignificant village, with the name of the stop serving the closed city made equivocal or misleading. For mail delivery, a closed city is usually named as the nearest large city and a special postcode e.g. Arzamas‑16, Chelyabinsk‑65. The actual settlement can be rather distant from their namesakes, for instance, Sarov, designated Arzamas-16, is in the federal republic of Mordovia, whereas Arzamas is in the Nizny Novgorod region (roughly 75 kilometres (47 mi) away). People not dwelling in a closed city were subject to document checks and security checkpoints, and explicit permission was required for them to visit.[1] To relocate to the closed city, one would need security clearance by the KGB.

The closed city was sometimes guarded by a security perimeter with barbed wire and towers, much like a prison. This did not limit the freedom of the residents, who could easily cross the perimeter via the security checkpoint.[citation needed] The very fact of such a city's existence was often classified, and residents were expected not to divulge to outsiders their place of residence. This lack of freedom was often compensated by better housing conditions and a better choice of goods in retail trade than elsewhere in the country. Also, in the USSR, people working with classified information received a salary bonus. 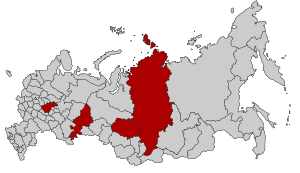 Closed cities were established in the Soviet Union from the late 1940s onwards under the euphemistic name of "post boxes", referring to the practice of addressing post to them via mail boxes in other cities. They fell into two distinct categories.

The locations of the first category of the closed cities were chosen for their geographical characteristics. They were often established in remote places situated deep in the Urals and Siberia, out of reach of enemy bombers. They were built close to rivers and lakes which were used to provide the large amounts of water needed for heavy industry and nuclear technology. Existing civilian settlements in the vicinity were often used as sources of construction labour. Although the closure of cities originated as a strictly temporary measure which was to be normalized under more favorable conditions, in practice the closed cities took on a life of their own and became a notable institutional feature of the Soviet system.[3]

Movement to and from closed areas was tightly controlled. Foreigners were prohibited from entering them and local citizens were under stringent restrictions. They had to have special permission to travel there or leave, and anyone seeking residency was required to undergo vetting by the NKVD and its successor agencies. Access to some closed cities was physically enforced by surrounding them with barbed wire fences monitored by armed guards.

The "box" was the unofficial name of a secret Soviet facility much like the closed city, but smaller, usually the size of a factory. The "box" name was usually classified, as were the activities there. Incoming mail was addressed to "mailbox #XXXX", thus the name of "box". Most Soviet design bureaus for weapons, aircraft, space, military electronics, etc. were "boxes".[citation needed] 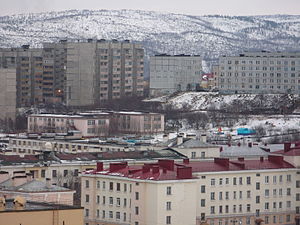 The policy of closing cities underwent major changes in the late 1980s and early 1990s. Some cities, such as Perm, were opened well before the fall of the Soviet Union; others, such as Kaliningrad and Vladivostok, remained closed until as late as 1992. The adoption of a new constitution for the Russian Federation in 1993 prompted significant reforms to the status of closed cities, which were renamed "closed administrative-territorial formations" (or ZATO, after the Russian acronym). Municipally all such entities have a status of urban okrugs, as mandated by the federal law.

Some Russian closed cities are open for foreign investment, but foreigners may only enter with a permit. An example is the Nuclear Cities Initiative (NCI), a joint effort of the United States National Nuclear Security Administration and Minatom, which involves in part the cities of Sarov, Snezhinsk, and Zheleznogorsk.

The number of closed cities has been significantly reduced since the mid-1990s. However, on 30 October 2001, foreign travel (without any exceptions) was restricted in the northern cities of Norilsk, Talnakh, Kayerkan, Dudinka, and Igarka. Russian citizens visiting these cities are not required to have travel permits.

Krasnoyarsk-26 in Siberia, researched for the subject of Sidney Sheldon's 2001 fictional murder mystery-romance The Sky is Falling,[6] was planned in 2003 to be shut down by 2011,[7] in co-operation with the U.S, and documented by their Natural Resources Defense Council,[8] but actually closed in 2008.[9]

The number of closed cities in Russia is defined by government decree (see links further). They include the following cities. Reasons for restrictions are denoted in the descriptions below. 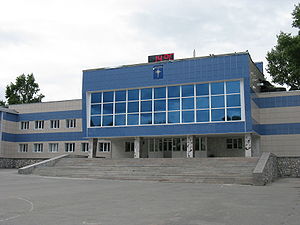 The cultural center in Zvyozdny, Russia 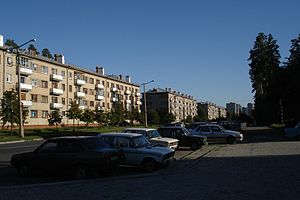 A street in Snezhinsk, Russia 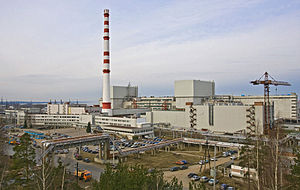 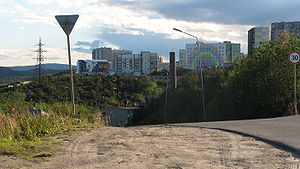 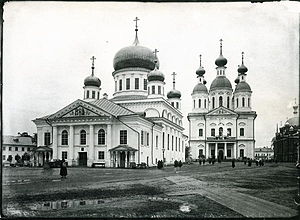 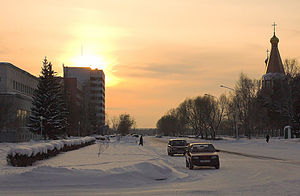 A view of Seversk, Russia

The following Russian localities do not have closed city status, but travel restrictions were imposed in November 2001 to all non-Russians, except for Belarusians

There were two closed cities in Estonia: Sillamäe and Paldiski. As with all the other industrial cities, the population of them was mainly Russian-speaking. Sillamäe was the site for a chemical factory that produced fuel rods and nuclear materials for the Soviet nuclear power plants and nuclear weapon facilities, while Paldiski was home to a Soviet Navy nuclear submarine training centre. Sillamäe was closed until Estonia regained its independence in 1991; Paldiski remained closed until 1994, when the last Russian warship left.[citation needed]

Tartu, home to Raadi Airfield, was partially closed. Foreign academics could visit the University of Tartu, but had to sleep elsewhere. 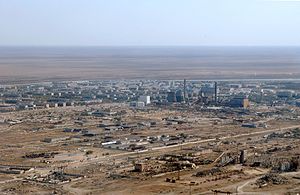 An aerial view of Baikonur, Kazakhstan

Moldova has one official closed city – the commune Cobasna (Rîbnița District) in the disputed area of Transnistria. The commune, located on the left bank of the Dniester river, still contains military warehouses of the former Soviet 14th Army.[citation needed]

Ukraine had eighteen closed cities: among them the Crimean port of Sevastopol and the industrial city of Dnipropetrovsk, though both were restricted to foreigners, not locals. Travel restrictions were lifted in the mid-1990s.[citation needed].