From Infogalactic: the planetary knowledge core
(Redirected from Cloves)
Jump to: navigation, search
This article is about the spice. For other uses, see Clove (disambiguation).

Cloves are the aromatic flower buds of a tree in the family Myrtaceae, Syzygium aromaticum. They are native to the Maluku Islands in Indonesia, and are commonly used as a spice. Cloves are commercially harvested primarily in Bangladesh, Indonesia, India, Madagascar, Zanzibar, Pakistan, Sri Lanka and Tanzania.

The clove tree is an evergreen tree that grows up to 8–12 m tall, with large leaves and sanguine flowers grouped in terminal clusters. The flower buds initially have a pale hue, gradually turn green, then transition to a bright red when ready for harvest. Cloves are harvested at 1.5–2.0 cm long, and consist of a long calyx that terminates in four spreading sepals, and four unopened petals that form a small central ball. 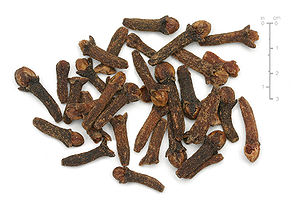 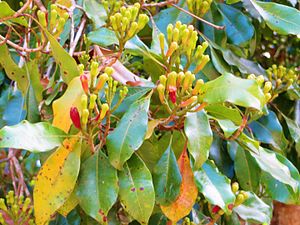 Cloves are used in the cuisine of Asian, African, and the Near and Middle East countries, lending flavor to meats, curries, and marinades, as well as fruit such as apples, pears or rhubarb. Cloves may be used to give aromatic and flavor qualities to hot beverages, often combined with other ingredients such as lemon and sugar. They are a common element in spice blends such as pumpkin pie spice and speculoos spices.

A major component of clove taste is imparted by the chemical eugenol,[3] and the quantity of the spice required is typically small. It pairs well with cinnamon, allspice, vanilla, red wine and basil, as well as onion, citrus peel, star anise, or peppercorns.

The spice is used in a type of cigarette called kretek in Indonesia.[1] They have been smoked throughout Europe, Asia, and the United States. In 2009, clove cigarettes (as well as fruit- and candy-flavored cigarettes) were outlawed in the US. Cigarettes containing clove are now classified as cigars when sold in the US.[4]

Due to the bioactive chemicals of clove, the spice may be used as an ant repellent.[5]

They can be used to make a fragrance pomander when combined with an orange. When given as a gift in Victorian England, such a pomander indicated "warmth of feeling."

Cloves are used in Indian Ayurvedic medicine, Chinese medicine, and western herbalism and dentistry where the essential oil is used as an anodyne (painkiller) for dental emergencies. Cloves are used as a carminative, to increase hydrochloric acid in the stomach and to improve peristalsis. Cloves are also said to be a natural anthelmintic.[6] The essential oil is used in aromatherapy when stimulation and warming are needed, especially for digestive problems. Topical application over the stomach or abdomen are said to warm the digestive tract. Applied to a cavity in a decayed tooth, it also relieves toothache.[7]

In Chinese medicine, cloves or ding xiang are considered acrid, warm, and aromatic, entering the kidney, spleen and stomach meridians, and are notable in their ability to warm the middle, direct stomach qi downward, to treat hiccup and to fortify the kidney yang.[8] Because the herb is so warming, it is contraindicated in any persons with fire symptoms and according to classical sources should not be used for anything except cold from yang deficiency. As such, it is used in formulas for impotence or clear vaginal discharge from yang deficiency, for morning sickness together with ginseng and patchouli, or for vomiting and diarrhea due to spleen and stomach coldness.[8]

Cloves may be used internally as a tea and topically as an oil for hypotonic muscles, including for multiple sclerosis.[citation needed] This is also found in Tibetan medicine.[9] Some recommend avoiding more than occasional use of cloves internally in the presence of pitta inflammation such as is found in acute flares of autoimmune diseases.[10] 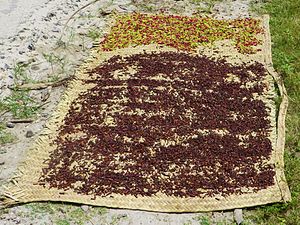 The U.S. Food and Drug Administration (FDA) has reclassified eugenol (one of the chemicals contained in clove oil), downgrading its effectiveness rating. The FDA now believes not enough evidence indicates clove oil or eugenol is effective for toothache pain or a variety of other types of pain.[11]

Studies to determine its effectiveness for fever reduction, as a mosquito repellent, and to prevent premature ejaculation have been inconclusive.[11] It remains unproven whether clove may reduce blood sugar levels.[12]

In addition, clove oil is used in preparation of some toothpastes and Clovacaine solution, which is a local anesthetic used in oral ulceration and inflammation. Eugenol (or clove oil generally) is mixed with zinc oxide to form a temporary tooth cavity filling.[13]

Clove oil can be used to anesthetize fish, and prolonged exposure to higher doses (the recommended dose is 400 mg/l) is considered a humane means of euthanasia.[14]

Clove stalks are slender stems of the inflorescence axis that show opposite decussate branching. Externally, they are brownish, rough, and irregularly wrinkled longitudinally with short fracture and dry, woody texture.

Mother cloves (anthophylli) are the ripe fruits of cloves that are ovoid, brown berries, unilocular and one-seeded. This can be detected by the presence of much starch in the seeds.

Brown cloves are expanded flowers from which both corollae and stamens have been detached.

Exhausted cloves have most or all the oil removed by distillation. They yield no oil and are darker in color.[15]

Archeologists have found cloves in a ceramic vessel in Syria, with evidence that dates the find to within a few years of 1721 BCE.[16] In the third century BCE, a Chinese leader in the Han Dynasty required those who addressed him to chew cloves to freshen their breath.[17] Cloves were traded by Muslim sailors and merchants during the Middle Ages in the profitable Indian Ocean trade, the clove trade is also mentioned by Ibn Battuta and even famous Arabian Nights characters such as Sinbad the Sailor are known to have bought and sold cloves from India.[18]

Until modern times, cloves grew only on a few islands in the Maluku Islands (historically called the Spice Islands), including Bacan, Makian, Moti, Ternate, and Tidore.[16] In fact, the clove tree that experts believe is the oldest in the world, named Afo, is on Ternate. The tree is between 350 and 400 years old.[19] Tourists are told that seedlings from this very tree were stolen by a Frenchman named Poivre in 1770, transferred to France, and then later to Zanzibar, which was once the world's largest producer of cloves.[19]

Until cloves were grown outside of the Maluku Islands, they were traded like oil, with an enforced limit on exportation.[19] As the Dutch East India Company consolidated its control of the spice trade in the 17th century, they sought to gain a monopoly in cloves as they had in nutmeg. However, "unlike nutmeg and mace, which were limited to the minute Bandas, clove trees grew all over the Moluccas, and the trade in cloves was way beyond the limited policing powers of the corporation."[20]

The compound eugenol is responsible for most of the characteristic aroma of cloves.

Eugenol comprises 72-90% of the essential oil extracted from cloves, and is the compound most responsible for clove aroma.[3] Other important essential oil constituents of clove oil include acetyl eugenol, beta-caryophyllene and vanillin, crategolic acid, tannins such as bicornin,[3][21] gallotannic acid, methyl salicylate (painkiller), the flavonoids eugenin, kaempferol, rhamnetin, and eugenitin, triterpenoids such as oleanolic acid, stigmasterol, and campesterol, and several sesquiterpenes.[22]

Eugenol is toxic in relatively small quantities; for example, a dose of 5-10 ml has been reported as a near fatal dose for a 2 year old child.[23]