Benjamin "Coach" Wade (born (1971-09-18)September 18, 1971)[1][2] is an American reality television personality best known for being a contestant on Survivor: Tocantins, Survivor: Heroes vs. Villains, and Survivor: South Pacific. Born in Bolivar, Missouri, he later moved to Susanville, California, to conduct the Susanville Symphony[3] and pursue "adventures" in Hollywood.[4]

Wade grew up in Knoxville, Tennessee, where he attended and graduated from West High School. He began his musical career as a child in Knoxville, making appearances with the Indianapolis Symphony, the Knoxville Symphony, and the New York Metropolitan Opera.[3] He majored in Business at the University of Tennessee and graduated in 1993.[5]

In 1997, Wade was hired at Simpson University in Redding, California, to coach the women's soccer team. He then spent thirteen years coaching collegiate soccer teams and ended up at Southwest Baptist University from 2005[6] to 2009.[7] After his appearance on Survivor, Wade was fired as head women's soccer coach for the university.[4][8] The university's athletic director Brent Good had fired Wade for not telling the school that he would be taking two months off in order to participate in Survivor. Good stated in an interview, "He [Wade] said he was going to be gone for a week...the week went beyond that, which went beyond that, which went beyond that." According to Good, Wade left the team with two weeks left in the season in October but did not return to the school until December.[4] In 2010 he signed a contract to coach the men's soccer team at Lassen College, a community college located in Susanville.[9] On December 10, 2013, Wade was hired as the first ever men’s soccer head coach at Lake Tahoe Community College. He retired from that position in November 2015, to spend more time with his family.[10] 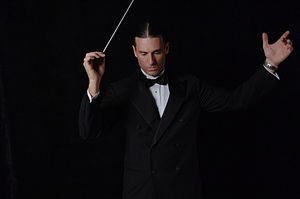 Wade was hired on with the Susanville Symphony in 2003. His main instrument was the trumpet. He has composed several classical music pieces and is the co-founder and current artistic director and conductor of the Susanville Symphony.[3] In 2011, his ballet The Four Elements premiered.[11] A documentary featuring the accomplishments of this organization is chronicled in Small Town Big Symphony, filmed by his brother Peter in 2006.[12] Wade is also a teacher of music history at Lassen College.[13]

Wade was selected to participate on Survivor: Tocantins in 2009, the 18th season of the series. He is recognized as the main antagonist of this season; however, Jeff Probst has stated he doesn't feel like Wade did anything to earn this reputation. Being one of the most controversial characters to ever play the game,[14] he made it to a 5th place finish. He gave nicknames to his fellow tribemates: James "J.T." Thomas, Jr., the "warrior", Stephen Fishbach, the "wizard", Tyson Apostol, the "assistant coach" (to which Tyson later wished to upgrade himself to "co-coach"), and himself, the "Dragon Slayer". These players together formed the "Warrior Alliance".[15] Coach was perhaps most famous for telling stories of adventure from his previous exploits as a professional kayaker,[16] although many of these stories seemed to have a rather casual relationship with reality.[17]

For the 20th season of the series, CBS brought back "heroes" and "villains" from previous seasons.[15] Wade was selected to participate for the Villains and was the 9th person voted off and the 1st member of the jury. During his time in the game, he was a part of the Villains majority alliance and had a close alliance and relationship with fellow Villain Jerri Manthey, leading some to believe that the two had a possible romantic connection. Coach appeared to be in the majority alliance on his tribe at the time of his elimination, but outsiders Sandra Diaz-Twine, the eventual winner, and Courtney Yates managed to convince the alliance that Coach was not trustworthy, and he was sent to the jury in place of Yates. At the reunion, Wade mentioned that after this season and watching Tocantins, he realized how people viewed him, and decided that he did not want to be viewed as "The Dragon Slayer" anymore.

In 2011, Coach returned to Survivor for the third time in Survivor: South Pacific, as the self-styled 'Zen Slayer'[18] and one of two returning contestants (the other being Ozzy Lusth). During the season, Coach was assigned to the Upolu tribe through random draw, gaining the friendship of Edna Ma on the first day. On the first night, he made an alliance with Sophie, Rick, Albert, and Brandon Hantz. Brandon later revealed to Coach that he was Russell Hantz's nephew. Coach decided to trust Brandon, but still was wary of Brandon's outbursts. Coach and his four alliance members eliminated Christine, Stacey and Mikayla, sending them all to Redemption Island. At camp, Coach found the hidden immunity idol with the help of Albert and Sophie, keeping it a secret from Brandon and Edna. Later on, Coach staged the idol's "discovery" for Brandon, under the guise of a prayer ritual. The tribes merged with six members each, prompting Coach to attempt to sway Savaii member Cochran over in order to avoid a tie. Coach's alliance, now including Cochran, voted off the remaining Savaiis. Both Cochran and Edna, knowing themselves to be on the outside of the alliance, tried to get Coach to betray his original alliance, however Coach decided against it. Coach voted off Cochran first, followed by Edna. Coach, Sophie and Albert ended up in the final three and Coach lost to Sophie in a 6-3-0 vote, gaining 3 votes.