From Infogalactic: the planetary knowledge core
Jump to: navigation, search
This article is about coaching inns in general. For individual inns, see Stagecoach Inn (disambiguation). 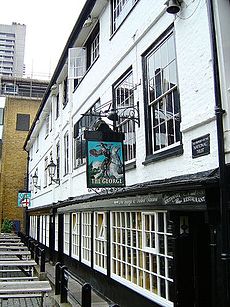 The George Inn, Southwark is the only galleried coaching inn to survive in London[1]

In Europe, from approximately the mid-17th century for a period of about 200 years, the coaching inn, sometimes called a coaching house or staging inn, was a vital part of the inland transport infrastructure, as an inn serving coach travellers. Just as with roadhouses in other countries, although many survive, and some still offer overnight accommodation, in general they have lost their original function and now fulfil much the same function as ordinary pubs. There are few motels with the function of refueling to motor vehicles, but the feeding function to horses was required for coaching inn.

Painting of the first Cock Hotel in Sutton, Greater London by Thomas Rowlandson in 1789.[2]

Coaching inns stabled teams of horses for stagecoaches and mail coaches and replaced tired teams with fresh teams. Traditionally they were seven miles apart but this depended very much on the terrain. Some English towns had as many as ten such inns and rivalry between them was intense, not only for the income from the stagecoach operators but for the revenue for food and drink supplied to the wealthy passengers. Barnet, Hertfordshire was one such location and even today boasts an unusually high number of historic pubs along its high street due to its former position on the Great North Road from London to the North of England.

A pair of coaching inns alongside the former A5 road or the old Roman road Watling Street in Stony Stratford (Buckinghamshire, England), named respectively 'The Cock' and 'The Bull', are said to have given rise to the term "cock and bull stories." Coaches or the Mail coach would stop in the town on their way from London to the North and many a traveller's tall tale would be further embellished as it passed between the two hostelries, fuelled by ale and an interested audience. Hence any suspiciously elaborate tale would become a cock and bull story. This is a cock-and bull story in itself, however; as there is no evidence to suggest that this is where the phrase originated.[3] The phrase, first recorded in 1621, may instead be an allusion to Aesop's fables, with their incredible talking animals.[4] As this slightly predates coaching inns, the names of the two inns could have been a reference to "Cock and Bull stories" as to encourage the passing of such anecdotes within their doors. 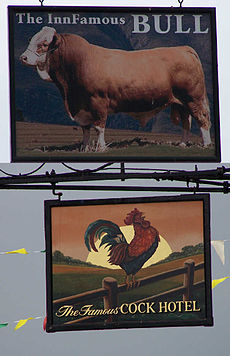 Pub signs of the Cock and the Bull

Examples of historic sites of coaching inns in central London include the plaque on the Nomura building close to the Museum of London on London Wall commemorating the "Bull and Mouth" Inn; Golden Cross House, opposite St Martin's in the Fields recalls the Golden Cross, Charing Cross coaching inn.

Historic inns in Oxford include The Bear Inn (originally established in 1242) and the Lamb & Flag.

Examples of historic inns in Wales include the Black Boy Inn (built 1522) and the Groes Inn (1573).[5] The Black Lion in Cardigan (established 1105) is probably the oldest Welsh coaching inn.[6]