Coats of arms of US Air Defense Artillery regiments are heraldic emblems associated with Field artillery, Air Defense Artillery, and coast artillery regiments in the US Army. Under Army Regulation 840-10, each regiment and separate table of organization and equipment (TOE) battalion of the US Army is authorized a coat of arms to be displayed on the organization's flag, called the "colors."[1] This coat of arms usually forms the basis for the unit's distinctive unit insignia (DUI), the emblem worn by all members of the unit on their service uniforms.[2]

The coats of arms for artillery units normally incorporate the color red, which has been the traditional color of the Artillery Branch in the US Army since the formation of the Corps of Artillery in 1777.[3] Below are galleries of the coats of arms of US Army Air Defense Artillery units. These coats of arms are generally the ones brought forward from Coast Artillery units after 1968 under the creation of the Air Defense Artillery branch. Most are the work of Master Gunner and Master Sergeant Edward C. Kuhn (March 29, 1872 – September 4, 1948), who designed the first authorized coats of arms and distinctive unit insignia for the U.S. Army Coast Artillery Corps, Engineer Corps, Cavalry, Infantry, National Guard and other branches.[4][5] The official mottoes (as awarded by The Institute of Heraldry of the U.S. Army) and/or special designations (as awarded by the United States Army Center of Military History) of the units are also noted. 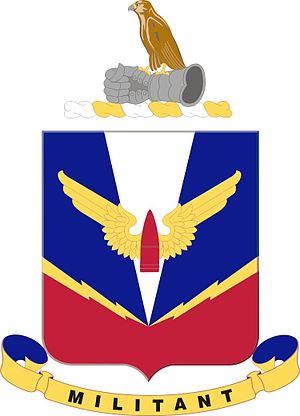 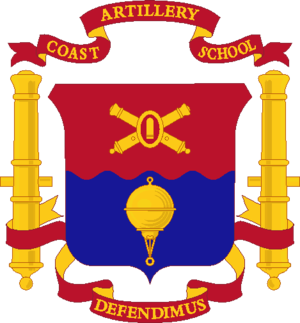