Cobham Hall is an independent day and boarding school for girls in Cobham, Kent. The school is housed in a Tudor era manor, which is now Grade I listed. It is a Round Square school[1] and a member of the Girls' Schools Association. 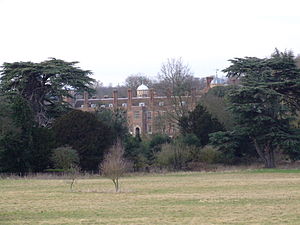 There has been a manor house on the site since the 12th century. The current building consists of a pair of Tudor wings built for William Brooke, 10th Baron Cobham in the 16th century and a later classical central block, the 'Cross Wing', remodeled in 1661-63 by Peter Mills of London, for Charles Stewart, 3rd Duke of Richmond.[2] The attic storey was extended and other alterations made for John Bligh, 3rd Earl of Darnley, by Sir William Chambers, ca 1767-70[3] A kitchen court was added to the rear in 1771-73. The most notable feature of the interior is the two-storey Gilt Hall, designed and installed by George Shakespear, master carpenter and architect, of London, who made extensive interior alterations, 1770-81.[4] The organ was built by John Snetzler in 1778-9.[5]

The fourth earl, who inherited in 1781, employed James Wyatt extensively, for interiors that included the Picture Gallery and the Dining Room, and for stables and a Gothic dairy.[6] The Library was fitted up by George Stanley Repton in 1817-20,[7] and with his son, John Adey Repton, in Jacobethan style, including the ceiling for "Queen Elizabeth's Room" (1817).[8] Cobham Hall remained the family home of the Earls of Darnley until 1957 and is now home to the school. It is open to the public on a limited number of days each year. [1]

The building has also been used as a film set. A scene in Agent Cody Banks 2 in which Frankie Muniz fights Keith Allen in a room full of priceless treasures was filmed in the Gilt Hall. Scenes from an adaption of Bleak House were also filmed outside the building, and it was also used in a few scenes in the comedy sketch show Tittybangbang.

The Hall is used as the school 'Abbey Mount' in the 2008 film Wild Child starring Emma Roberts. and as the Foundling Hospital in the CBBC adaptation of Hetty Feather.

Cobham Hall was founded as an international boarding school for girls aged between eleven and eighteen in 1962. The school has a large contingent of international students. Just over 50% are local British while the rest represent some 30 nationalities.[9]

In 2009, the administration decided to replace A Levels with the International Baccalaureate as its main curriculum in Sixth Form. Girls in Middle School (up to Year 11) follow the GCSE curriculum.[10]

Over half of the student population are boarders. There are three boarding houses: Main Hall, Bligh House and Brooke House.[11]