From Infogalactic: the planetary knowledge core
Jump to: navigation, search
This article is about the city in Germany. For other uses, see Coburg (disambiguation).

Coburg's coat of arms, honoring the city's patron Saint Maurice, was granted in 1493.

Coburg lies about 90 km south of Erfurt and about 100 km north of Nuremberg.

Coburg is divided into 15 districts: 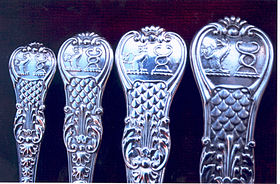 Ehrenburg Palace, rebuilt after a catastrophic fire in 1690, received its neo-Gothic exterior in the 19th century. 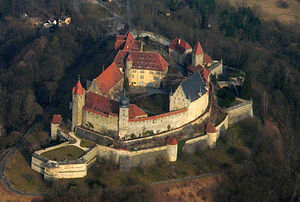 Coburg was first mentioned in a document dated 1056, although there was a settlement at the site that predates it called Trufalistat. Following several changes of feudal ownership, it came into the hands of the House of Wettin in 1353 from the House of Henneberg with the marriage of Friedrich III, the Strong, with Katherina von Henneberg and was initially regarded by them as a Saxon outpost within Franconia.

One of Germany's largest castles, the mighty Veste Coburg citadel, built starting in 1225 (upon the site of an 11th-century chapel), dominates the town from its hilltop. During the Diet of Augsburg in 1530 reformer Martin Luther spent six months at the castle (located at the southernmost point of the Saxon duchy) while his liege lord, the Duke of Saxony, attended the Diet. Luther was forbidden to attend by the duke, who feared that he would be imprisoned and burned as a heretic. While quartered at the castle Luther continued with his translation of the Bible into German.

In the old town at the base of the castle hill, the Ehrenburg Palace (a former Franciscan Monastery) was rebuilt in 1543. It was gutted by fire in 1690 and rebuilt in a Baroque style, with stucco work by North Italian craftsmen that includes a famous "Hall of the Giants" (which contains a plaque that states it was the location of the first meeting between England's Queen Victoria and Franz Josef Emperor of Austria in 1860).

Ernst Frederick, the fourth Duke of Saxe-Coburg-Saalfeld, moved his capital from Saalfeld to Coburg in 1764. Coburg then became capital of the Duchy of Saxe-Coburg-Saalfeld and then the Duchy of Saxe-Coburg and Gotha. During the 19th century, dynastic marriages created ties with the royal families of Belgium, Bulgaria, Portugal, as well as Great Britain. The era of political dominance peaked with Leopold Friedrich; born Prince of Saxe-Coburg-Saalfeld, becoming the King of Belgians in 1831 and Prince Albert of Saxe-Coburg and Gotha, born in Schloss Rosenau, marrying his first cousin, Queen Victoria in 1840. The marriage between Albert and Victoria established the present British royal house, which renamed itself Windsor during World War I. This marriage in turn led to a union with Germany's ruling dynasty, the Hohenzollerns, when the couple's eldest child, Victoria, married the future Kaiser Friedrich III.

After her marriage, Queen Victoria said of Coburg:

If I were not who I am, this would have been my real home, but I shall always consider it my second one.[2]

Due to the royal connections among the royal houses of Europe, Coburg was the site of many royal Ducal weddings and visits. Britain's Queen Victoria made six visits to Coburg during her 63-year reign. In 1894 one ceremony brought together Queen Victoria, her son Edward (future Edward VII), her second son Alfred (Duke of Saxe-Coburg-Gotha), her daughter the German dowager Empress Friedrich (Victoria), and many of her grandchildren, such as future Tsar Nicholas and Alexandra of Russia, Kaiser Wilhelm II of Germany, and the future King George V of Great Britain. 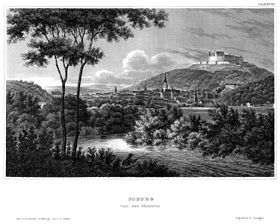 In 1920, two years after the abdication of the last duke, the locals voted to join Bavaria. Thus whilst the other Saxon-Thuringian principalities were later incorporated into the German Democratic Republic after World War II, Coburg became part of West Germany. As a result, the town spent the Cold War years lying right next to the Iron Curtain, surrounded by East German territory on three sides.

In 1929, Coburg was the first German city in which the Nazi Party won the absolute majority of the popular vote during municipal elections.[3]

In 1946, Polish ambassador Oskar R. Lange alleged that Coburg was a base for the Western Allies to organize a Polish armed insurgency led by Władysław Anders against Soviet-backed communists in Poland.[4]

Over two thirds of Coburg's population live in Coburg City.

Most residents of Coburg are members of the Evangelical Church (Lutheran). Other Christian communities are Baptists, Seventh-day Adventists, the ICF Movement, Jehovah's Witnesses, Catholics, Old Catholics and the New Apostolic Church, as well as The Church of Jesus Christ of Latter-day Saints. There are also three communities of Muslims. Coburg had a large Jewish community until the 1940s. Jews had lived there since the 14th century. The old synagogue was a former church. Today it is used by Old Catholics. Coburg became Protestant after the Reformation. All Catholics were persecuted. A new Catholic community was founded in the 19th century.

Coburg is twinned with:

Coburg has the typical features of a former capital of a German princely state. There are numerous houses from the 16th, 17th and 18th centuries. The most important landmarks include:

Its Gothic Revival exterior was remodelled by Karl Friedrich Schinkel in the 19th century. It now also houses a museum as well as a famous library.

Coburg is home to two major festivals: de (Samba-Festival Coburg) and Johann Strauss Musiktage. Coburg is referred to as "Europe's Capital of Samba."[5]

As a result of the large presence of the US Army prior to German re-unification, Americans and American culture are still present in Coburg and the surrounding area. This influence ranges from American-style pubs and restaurants to two sports clubs sponsoring[6] baseball teams.

The National Hot Dog and Sausage Council asserts that Frankfurt is traditionally credited with originating the frankfurter. According to the Council, this claim is disputed and that the hot dog was created in the late 17th century by Johann Georghehner, a butcher, living in Coburg.[7]

Coburg was the first German town to elect a Nazi Mayor.

A popular local delicacy is the Coburger Bratwurst, a sausage (the official size of which is denoted by the a Marshall's staff hold by the statue of the city's patron, Sankt Mauritius, located on the town hall and overlooking the square) roasted over a pine cone fire. The sausage is served in a Semmel (a small bread bun, a third the size of the sausage itself), and is highly popular with locals and tourists alike.

Coburg Peak on Trinity Peninsula in Graham Land, Antarctica is named after the town, in connection with the Bulgarian royal house of Coburg (Saxe-Coburg-Gotha).[8]

From the main station one can go to Lichtenfels, Bamberg, Forchheim, Erlangen, Fürth and Nürnberg, to Neustadt bei Coburg, Sonneberg, to Bad Rodach and to Kulmbach, Neuenmarkt-Wirsberg.

In the future, some Intercity-Express high speed trains will stop in Coburg on the Nuremberg–Erfurt high-speed railway, part of a new Berlin-Erfurt-Coburg-Nürnberg route.

Small planes can land on the two airfields:

Large airports nearby are in Frankfurt, Erfurt and Nuremberg.