Cockermouth /ˈkɒkərməθ/[1] is an ancient market town and civil parish in the Borough of Allerdale in Cumbria, England, and is so named because it is at the confluence of the River Cocker as it flows into the River Derwent. The mid-2010 census estimates state that Cockermouth has a population of 8,204,[2] increasing to 8,761 at the 2011 Census.[3]

Historically a part of Cumberland, Cockermouth is situated outside the English Lake District on its northwest fringe. Much of the architectural core of the town remains unchanged since the basic medieval layout was filled in the 18th and 19th centuries. The regenerated Market place is now a central historical focus within the town and reflects events during its 800-year history. The town is prone to flooding, being flooded in 2005, again much more severely on 19 November 2009 and on 5 December 2015.

'Cockermouth', is 'the mouth of the River Cocker', and the river takes its name from the Brythonic Celtic word "kukrā", meaning 'the crooked one.'[4] It has frequently been noted on lists of unusual place names.[5]

Cockermouth owes its existence to the confluence of the rivers Cocker and Derwent, being the lowest point, historically, at which the resultant fast flowing river powered by the Lake District could be bridged.[6] Cockermouth is situated a few minutes travelling distance from lakes such as Crummock Water, Loweswater, and Bassenthwaite.

Cockermouth has a temperate climate that is influenced by the Irish Sea and its low lying elevation. Cockermouth receives slightly below average rainfall compared to the UK average. Temperatures are also round about average compared to other parts of the UK. The nearest weather station for which online records are available is Aspatria, about 7 miles North North East of the town centre.

The Romans built a fort at Derventio, now the adjoining village of Papcastle, to protect the river crossing on a major route for troops heading towards Hadrian's Wall.[11]

The main town developed under the Normans who, after occupying the former Roman fort, built Cockermouth Castle closer to the river crossing: little remains today of the castle thanks to the efforts of Robert the Bruce. The market town developed its distinctive medieval layout, of a broad main street of burgesses’ houses, each with a burgage plot stretching to a "back lane": the Derwent bank on the north and Back Lane (now South Street), on the south.[6] The layout is largely preserved, leading the British Council for Archaeology to say in 1965 that it was worthy of special care in preservation and development.[11]

The town market pre-dates 1221, when the market day was changed from Saturday to Monday. Market charters were granted in 1221 and 1227 by King Henry III, although this does not preclude the much earlier existence of a market in the town.[12] In recent times, the trading farmers market now only occurs seasonally, replaced by weekend continental and craft markets.

In the days when opening hours of public houses were restricted, the fact that the pubs in Cockermouth could open all day on Market days made the town a popular destination for drinkers, especially on Bank Holiday Mondays. The Market Bell remains as a reminder of this period (inset into a wall opposite the Allerdale Hotel)., while the 1761 and Castle pub (which spans three floors) have been renovated to reveal medieval stonework and 16th and 18th century features. 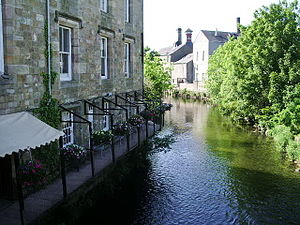 River Cocker with the walkway attached to the building.

Much of the centre of the town is of medieval origin substantially rebuilt in Georgian style with Victorian infill. The tree lined Kirkgate offers examples of unspoilt classical late 17th and 18th century terraced housing, cobbled paving and curving lanes which run steeply down to the River Cocker. Most of the buildings are of traditional slate and stone construction with thick walls and green Skiddaw slate roofs.

Many of the facades lining the streets are frontages for historic housing in alleyways and lanes (often maintaining medieval street patterns) to the rear. Examples of Georgian residences may be found near the Market Place, St. Helens Street, at the bottom of Castlegate Drive and Kirkgate.

Cockermouth lays claim to be the first town in Britain to have piloted electric lighting. In 1881 six powerful electric lamps were set up to light the town, together with gas oil lamps in the back streets. Service proved intermittent, and there was afterwards a return to gas lighting.[13] 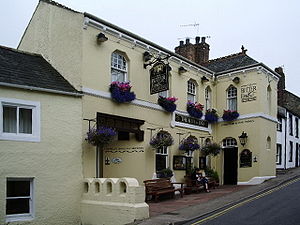 The centre of Cockermouth retains much of its historic character and the renovation of Market Place has been completed, now with an artistic and community focus. The Kirkgate Centre is the town's major cultural focus and offers regular historical displays by the Cockermouth Museum Group[14] in addition to holding major cultural events including theatre, international music and world cinema. The tree-lined main street boasts a statue of Lord Mayo, formerly an MP for Cockermouth, who became British Viceroy of India and whose subsequent claim to fame was that he was assassinated.

The renovated arts and cultural zone in the 13th century Market Place has undergone something of a "regeneration" following European Union funding, and is now pedestrian-friendly adorned with stone paving and roadways, underground lighting and controversial seating in bright colours to reflect the area's facades. Pavement art and stonework commemorate eclectic historical events, John Dalton's atomic theory, local dialect, flooding and a curious range other memorabilia.

There is a cycleway which runs along the former Cockermouth, Keswick and Penrith Railway route, and spans a high bridge over the Cocker affording views of the town and river-scape. 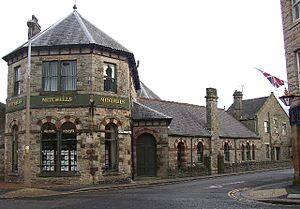 Cockermouth suffered badly in the nationwide flood on 19 and 20 November 2009.[15] Over 200 people needed to be rescued, with helicopters from RAF Valley, RAF Boulmer and RAF Leconfield retrieving about 50 and the remainder being rescued by boats, including those of the RNLI. Water levels in the town centre were reported to be as high as 2.50 metres (8 ft 2 in) and flowing at a rate of 25 knots. Many historic buildings on and adjacent to Main Street sustained severe damage, as did a number of bridges in and around the town. Recovery from the devastation was slow, with residents placed in temporary accommodation and some businesses temporarily relocated to Mitchells auction mart. By the summer of 2011 most of the damage had been repaired and buildings re-occupied, though some remained empty or boarded up.

Flooding occurred again in 2015 when the River Derwent burst its banks on December 5th, with several hundred homes and businesses affected.[16] 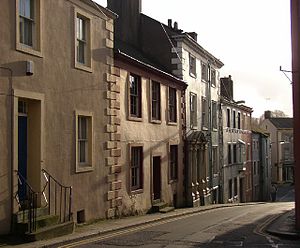 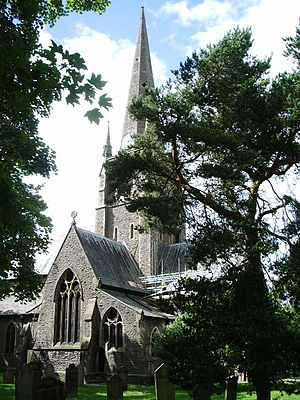 Cockermouth Castle is a sizeable but partly ruined Norman castle, formerly the home of the late Pamela, The Dowager Lady Egremont. Built at the confluence of the Rivers Cocker and Derwent, the castle has a tilting tower which hangs Pisa-like over Jennings Brewery. The castle, with its preserved dungeons, is only opened to the public once a year during the annual town festival.

Wordsworth House, the birthplace of William Wordsworth, has been restored following extensive damage during the November 2009 floods, and features a working eighteenth century kitchen and children's bedroom with toys and clothes of the times. Harris Park offers riverside walks and views down over the historic Town.

Culturally, the Kirkgate Centre[17] offers international music, theatre and world cinema (including critically acclaimed and art-house movies on Monday evenings) and the town has an annual festival of concerts and performances each summer. Cockermouth has an annual Easter Fair, fireworks display and carnival. In April 2005 it hosted its first Georgian Fair, which was repeated in 2006, again in May 2008 and 2010, with the next fair on 2 May 2015. At Christmas the town presents festive lighting throughout its main and subsidiary streets, accompanied by competing shop displays.

The main cemetery on the Lorton Road is something of a walker's garden, featuring streams, humped stone bridges and views of the nearby fells.

The adjoining village of Papcastle is also picturesque in its own right, and stands on the site of the Roman fort of Derventio (Papcastle), lined with grand 18th and 19th century houses.

Two and a half miles northwest of the town lies Dovenby Hall Estate, a 115-acre (0.47 km2) park and woodland estate. Dovenby Hall is the home of the Ford Rally team. The estate was bought in January 1998 by Malcolm Wilson for his M-Sport motorsport team and that was selected in 1996 by Ford Motorsport to build, prepare and run a fleet of cars for entry into the World Rally Championship.

Built as a market town, close to a fast flowing river in a farming area with a tradition of cloth weaving Cockermouth became a hub for spinning and weaving. Records show that the town had a fulling mill by 1156 and by the mid nineteenth century there were over forty industrial sites; mills (wool, linen, cotton), hat factories, tanneries and smaller concerns making chairs, churns, mangle rollers, nails and farm machinery.[6][11]

With the need for steam power, industrialisation declined, but the coming of the railway and the Victorian holiday, together with the power of Wordsworth's publications, meant that Cockermouth became an early inland tourist centre. The local economy is still reliant today on farming and tourism, with light industrial facilities servicing local needs. Industrialisation and hence work has moved to the west coast around Carlisle and Workington, and includes servicing the nuclear facilities at Sellafield.[6]

Cockermouth School is a comprehensive secondary school with around 1400 pupils including 310 sixth formers. The current headmaster is Dr R Petrie. Cockermouth School won the regional championship in the north of England for the kids lit quiz 2009 coming 1st with 92 points[18]

The Cockermouth, Keswick and Penrith Railway served the town. The original Cockermouth & Workington Railway station was replaced on a new alignment when the Cockermouth railway station opened to passenger traffic on 2 January 1865. The station was immortalised in 1964 in the song "Slow Train" by Flanders and Swann. The station closed on 18 April 1966. The site is now occupied by Cockermouth Mountain Rescue[19] and the Cumbria Fire and Rescue Service Headquarters. The old track bed now a public walkway, with the nearest railway stations now being Maryport on the Cumbrian Coast Line, and Penrith and Carlisle, the latter two located on the West Coast main line.

The nearest major airport is Newcastle Airport. Leeds Bradford International Airport is a little further, and further again is Manchester Airport, which offers a wider choice of destinations.

Two cycle routes pass through the town, the Sea to Sea Cycle Route from Workington to Tyneside, and the Reivers Cycle Route.

Cockermouth has a sports centre with swimming pool, two gyms, and two parks with riverside walks.

Cockermouth Cricket Club is one of the town's most successful and best supported sports teams. They play their home games at the Sandair Ground, located just off Gote Road. The First XI play in the North Lancashire and Cumbria League Premier Division, Second XI in the third tier of the same league. The club's Third XI play in the Cumbria Cricket League. The thriving junior section of the club runs from u11 up to u15. The current Club Captain is former Northamptonshire County Cricket Club batsman, Gareth White and for the 2015 season, the club's Overseas Professional is Fahad Masood, who has represented Pakistan 'A' in international cricket. [20]

Cockermouth School has an Astroturf pitch used for community football, including the local 6-a-side league.[21]

Cockermouth Rugby Football Club is based at the former Cockermouth Grammar School site and in 1987 played the first ever rugby union league match[citation needed] when they played Kirby Lonsdale when the Rugby Union formed national and regional leagues, the precursors of what have now become the national and premier leagues.

The town has a youth football club, Cockermouth F.C. In the 2007–2008 season, the Under 12 team were County Cup Champions. Cockermouth beat Allerdale Leisure, from Workington, 1-0 in the final.[citation needed]

The town was the birthplace of William Wordsworth and Dorothy Wordsworth. Others include: