Cocoa is a city in Brevard County, Florida. The population was 17,140 at the 2010 United States Census.[1] It is part of the Palm Bay–Melbourne–Titusville Metropolitan Statistical Area.

Cocoa's business district was destroyed by fire in 1890, but soon, significant development began to occur with the extension of the Jacksonville, St. Augustine, and Indian River Railway to Cocoa.[citation needed]

The city was chartered in 1895.[5] In the winter of 1894-1895, Cocoa experienced a second economic setback when the "Great Freeze" destroyed the citrus crop and forced many citrus workers to seek new occupations. According to one source, by 1903, the population of Cocoa had dropped to 382.

During the second decade of the 20th century, population growth and economic development in Cocoa accelerated. The state business directory of 1911-1912 set the population at 550. By 1925, the population was estimated at 1,800. During the Great Depression, the local economy declined and the two local banks failed. Still, by 1930, the population had risen to 2,200.[citation needed]

The population rose dramatically following the development of the space industry, quadrupling from 3,098 in 1940 to 12,244 in 1960. Cocoa and the surrounding area also became integrated with the tourist industry for the first time as thousands visited the area to witness the launches from Cape Canaveral. By 1980, the population had grown to 16,096.[6]

Education was segregated until the 1960s, at which time Monroe High School and elementary schools for black students were closed.[7]

In 1964, the Cocoa Expo Sports Center (Cocoa Stadium) was built for the Colt 45s spring baseball training and Grapefruit League games. The team later became the Houston Astros.[8] In the early 1980s, the city attempted to upgrade the stadium by asking the Astros to pay for needed repairs. In 1985, the team responded by moving its training to Osceola County Stadium in Kissimmee. As a result, it was decided that future negotiations with major league teams would be done by the county government.

Clearlake Middle School was closed in 2013. Students were moved to Cocoa High School, which was converted to a junior and senior high school.[9]

Cocoa is located at Lua error in Module:Coordinates at line 668: callParserFunction: function "#coordinates" was not found..[10]

The Cocoa Bird Count has annually counted species of birds in or near Cocoa since 1950. In 2010, it counted 150 species. There was an annual "Christmas Bird Count" before this, starting in 1900.[12]

Cocoa first approved the Council-Manager form of government in 1959, and subsequent changes to the state statutes mirrored the City of Cocoa's Council-Manager Plan. The City Council serves as the Board of Directors for the City, with the Mayor as Chairman. The City Manager serves as the Chief Executive. The City Council for the City of Cocoa is made up of five members; the Mayor is elected at large and the four council members are elected by each of their districts.

Downtown, now called "Cocoa Village", has been revitalized by funding for public infrastructure through the Cocoa Redevelopment Agency, City and private investment.

There were 6,939 households out of which 28.4% had children under the age of 18 living with them, 37.0% were married couples living together, 19.2% had a female householder with no husband present, and 39.0% were non-families. 32.0% of all households were made up of individuals and 11.5% had someone living alone who was 65 years of age or older. The average household size was 2.35 and the average family size was 2.97. 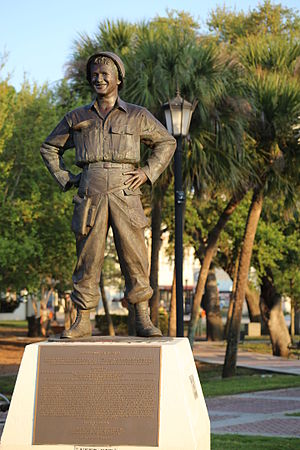 According to the 2013 American Community Survey:

In 2008, Kel-Tec CNC Industries, located in Cocoa, was the third-largest manufacturer of pistols in the United States.[18][19] Cocoa has 1,198 registered businesses that include light manufacturing and industrial, retail and office businesses.[citation needed]

The city area has the following educational institutions:

All are at least four-lane roads, unless otherwise designated.

The Florida East Coast Railway runs through Cocoa. The proposed All Aboard Florida high speed rail is designed to connect Orlando to Miami making a turn in Cocoa (designated the "Cocoa Curve"). 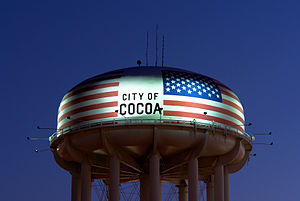 Since 1957, Cocoa has supplied the communities of central Brevard County with high quality water at a reasonable cost[citation needed]. Cocoa has accomplished this by making major investments in the water supply and treatment facilities needed to produce a sophisticated, well-developed sub-regional water system.

The flag was originally painted on the water tower free of charge by a Greek immigrant. He wanted to decorate the tower in time for the United States Bicentennial celebration in 1976.[26] In 2014, the City re-furbished and re-painted the tower with the iconic American Flags. 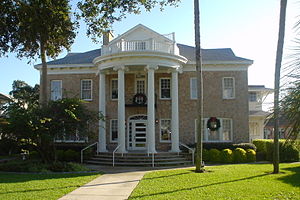 The Houston Astros held spring training in Cocoa from 1964 through 1984, and the Florida Marlins trained in Cocoa in 1993. Cocoa Stadium was also the long-time home of the Florida State League Cocoa Astros.

In 2009, the Space Coast Surge, a member of the Florida Winter Baseball League, had Cocoa Stadium as its home stadium.[28] The league suspended operations in November 2009.[29]

Cocoa High School has numerous state champion athletic teams. In 2015, the Cocoa High School football team was ranked 1st in the State of Florida and 13th in the Country and was on a 35-game winning streak against other Brevard County schools.