Cocoa Beach is a city in Brevard County, Florida. The population was 11,231 at the 2010 United States Census.[1] It is part of the Palm Bay-Melbourne-Titusville, Florida Metropolitan Statistical Area.

The first non-native settlement in the area was by a family of freed slaves following the American Civil War. In 1888, a group of men from Cocoa bought the entire tract of land, which went undeveloped until it was bought out in 1923 by a member of the group—Gus Edwards, Cocoa's city attorney. At that time, Edwards' total holdings included approximately 600 acres (240 ha), and he had stopped practicing law to devote all his efforts to developing the area.[4][5][6]

Prior to incorporation, the area was known as Oceanus.[7] The Town of Cocoa Beach was established on June 5, 1925. Cocoa Beach's first official meeting was held at the Cocoa Beach Casino on July 27, 1925, and adopted the City Seal.[8] Gus C. Edwards was elected[citation needed] [8] as mayor and served as a commissioner along with J.A. Haisten, and R.Z. Grabel. A little less than a month later, plans for a pier became official.

In 1935, the FDOT opened up what is now State Road A1A as a one-lane dirt road to Eau Gallie.[9] In 1938, a Deputy Marshal was appointed "to act in emergencies at night or at other times" for $.25/hour.[9] By 1939, the town had 49 residents. In 1940, the town requested that State Road 140 (now A1A) be routed on Orlando Avenue instead of Atlantic Avenue.[9] In 1942, the town prepared to receive men assigned to the newly opened Naval Air Station Banana River. Establishing regular garbage collection was discussed when the town discovered that the Air Station was having theirs collected.[9]

On May 1, 1942, the German submarine U-109 torpedoed the La Paz off the shore of Cocoa Beach. The crew was able to beach it with the help of tugs. Eventually it was returned to shipping. On May 3, the same U-boat sank the SS Laertes near the same spot.[10] Local boys were recruited for salvaging efforts and to rid the beach of subsequent debris.[11][12] Shortly thereafter, the federal government realized the danger of back-lighting from the coast making easy targets of passing ships and ordered a blackout for the remainder of the war.

In 1944, the town successfully fought a bill introduced in the Florida legislature which would have dissolved the city government.[9] In 1947 a single police officer was hired for $1/hour. The same year, the city constructed works for the distribution of potable water.[9] In 1950, a volunteer fire department was created which used a second-hand vehicle.[9] In 1950, a proposal to prevent people from driving on the beach was defeated.[9] In 1951, the city sought to place a stoplight, the city's first, at the intersection of what is now A1A and Minutemen Causeway.[9] In 1953, the city decided to mark the names of all streets.[9] In 1953, the city planned to pave A1A south from 520 down Orlando Avenue. The city intended to bear 1/3 of the costs, the adjacent property owners, 2/3.[9] In 1954, the Women's Club opened a library in the building used by the Fire Department.[9] In 1955, the speed limit in most of the town was raised to 35 miles per hour (56 km/h).[9] In 1955, the city prepared to house the people who were going to be launching missiles from what is now Cape Canaveral Air Force Station.[9] In 1956, the city attorney warned the council that blacks might attempt to use the beach. If they did, he recommended clearing the beach of all persons, both white and black. The 1954 decision, Brown v. Board of Education, had, in theory at least, integrated all general public facilities. Actual integration came later.[citation needed]

The city proposed selling the town dump to the school board for a junior high school, in order to keep students from being bused to Merritt Island.[9]

On June 29, 1957, the town of Cocoa Beach incorporated into a city. In September 1959, the city voted to add more sidewalks, improve the streets in residential areas as well as the main streets, and to pave more roads.[13]

In 1965, Cocoa Beach High School requested that Cocoa Avenue, the street that the school was located on, be renamed Minutemen Boulevard, in honor of the school's mascot, the Minuteman.

Cocoa Beach started its major growth during the 1960s (1000% population increase from 1950 to 1960)[5] as a result of America's space program. NASA's John F. Kennedy Space Center is located approximately 15 miles (24 km) north of town. Many people moved to Cocoa Beach due to jobs connected to the space program and in search of new opportunities.

After manned space flights, the town held parades in honor of the astronauts.

After NASA's Apollo program came to an end, and before the Space Shuttle program was in full swing, the town's economy reflected the resulting layoffs. At one point, in 1975, unemployment was 14.3%.[6] Many families lost their jobs or simply moved away. The housing market plummeted and some people unable to sell their homes simply abandoned them.[citation needed]

Cocoa Beach was the setting for the 1960s sitcom I Dream of Jeannie, although no episodes were actually filmed there, and star Barbara Eden only made two visits during the show's production — both in 1969, for publicity.[14] Cocoa Beach High School was used as the school in the 2002 movie Race to Space.[15] 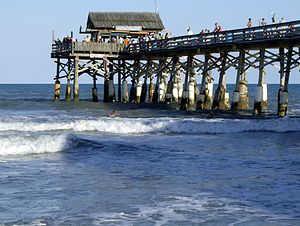 Cocoa Beach Pier, built in 1962, extends into the Atlantic Ocean

Propelled by a powerful hurricane, the ocean pushed its way through the barrier islands centuries ago and formed the Thousand Islands in the Banana River.[17]

There are a number of boating channels dredged in the area: the 0-99 Channel, the 100 Channel, the 200 Channel for houseboats, the 300 Channel, the 400 Channel near housing for private boats, the 500 Channel and the 600 Channel. Dredged material is placed on one of the Thousand Islands, but is now controlled.[18][19]

Many of the homes in Cocoa Beach are built on dredged mud and sand from the Banana River.

Cocoa Beach's has a humid Subtropical Climate Köppen climate classification of Cfa. This climate features hot and humid summers with frequent tropical downpours and daily thundershowers, and warm, dry, and sunny winters. The average high temperature in the warmest month (July) in Cocoa Beach is 91 °F (33 °C) and the average high in the coolest month (January) is 72 °F (22 °C).[20]

The city owns and runs a golf course on the Banana River.[23]

In 2011, the city photographed more than 20,000 instances of vehicles running red lights by the use of automatic cameras. A total of 6,595 violations were prosecuted.[26] In 2014, the city grossed $1.1 million for over 9.000 red light violations. Over 24,000 violations were captured on film. All could not be prosecuted for various reasons. The city netted over $249,000. The remainder went for licensing fees to the installing vendor; over half was remitted to the state. Cameras were sited at four locations on state road A1A, including the intersection with state road 520. Intersection crashes dropped from 88 in 2009 to 30 in 2014.[27]

The City Commission is made up of five members, one of whom is the Mayor. Historically, the commissioners were elected at-large to three-year terms but with a successful referendum on the 2010 ballot to hold elections on even-numbered years, the terms were extended to four years.

Following an election, a Vice Mayor is then selected from the commission members at an organizational meeting. The Mayor presides over all meetings and performs duties as delegated by the City Commission.[22] Seats affected by the 2010 referendum included Seat #1, Seat #4 and Seat #5. The November 6, 2012 election results are as followed[28]

There were 6,529 households,12.9% of which had children under the age of 18 residing; 45.5% were married couples living together; 5.8% had a female householder with no husband present, and 45.9% were non-families. 38.3% of all households were made up of individuals and 18.7% were households of persons 65 years of age or older living alone. The average household size was 1.91 and the average family size was 2.47. 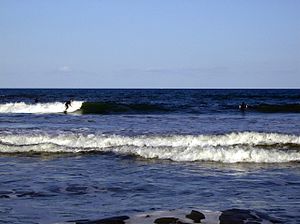 It is estimated that there are 2.4 million day trippers annually. While businesses appreciate the tourism, it creates a parking problem for the city.[35] There are 1,780 paved parking spaces and 607 spaces on the streets downtown, near the beach.[36]

The Cocoa Beach Pier, formerly known as the Cape Canaveral Pier, was built in 1962. An annual Easter Surfing Festival began in 1964. An estimated 100,000 spectators attend annually.[37] An annual Beach Fest is held in May.

There is a store that sells dinosaur and other fossils.[39]

The city has three public schools:

The following roads are usually called by their numbers when spoken:

The city contracted directly with Florida Power & Light for electricity, paying 10.689 cents per kilowatt hour in 2010.[44]

A reporter for The New York Times, there to cover a Space Shuttle launch in 2010, commented that the city

... isn't a dream destination ... (read: crowded, touristy and tacky) and ... prices are astronomical during shuttle launchings ...

An area spokesman replied that it was common everywhere to jack up room rates for major events.[53]