Code_Aster is a free and open source software package for civil and structural engineering, finite element analysis, and numerical simulation in structural mechanics which was originally developed as an in-house application by the French company EDF. It was released under the terms of the GNU General Public License in October 2001.

Code_Aster contains 1,500,000 lines of source code, most of it in Fortran and Python, and is being constantly developed, updated and upgraded with new models. Justifying quality labels required by nuclear industry, most of the fields of the software have been validated by independent comparisons with analytical or experimental results, benchmarks towards other codes. The software is provided with about 2,000 tests: they are devoted to elementary qualification and are useful as examples. The documentation of Code_Aster includes more than 14,000 pages and encompasses user's manuals, theory manuals compiling EDF's know-how in mechanics, example problems, verification manuals. The vast majority of the documentation is in French [1] with computer translations in English also available.[2] 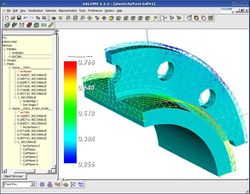 Post processing of a solution made with Code_Aster, under Linux

Code_Aster is mainly a solver for mechanics, based on the theory of Finite elements. This tool covers a large range of applications : 3D thermal analyses and mechanical analyses in linear and non-linear statics and dynamics, for machines, pressure vessels and civil engineering structures. Beyond the standard functionalities of a FEM software for solid mechanics, Code_Aster compiles specific research in various fields : fatigue, damage, fracture, contact, geomaterials, porous media, multi-physics coupling.

It is widely used at EDF for the expertise and the maintenance of power plants and electrical networks.

Code_Aster is officially available for GNU/Linux and FreeBSD. Successful ports to Microsoft Windows are available, though not for the most recent versions. A Linux Debian package is also available. [3] [4] [5] [6]