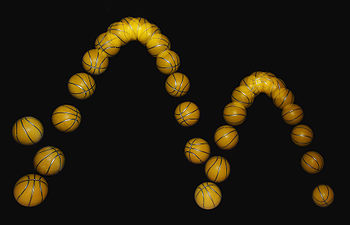 A bouncing basketball captured with a stroboscopic flash at 25 images per second: Ignoring air resistance, the square root of the ratio of the height of one bounce to that of the preceding bounce gives the coefficient of restitution for the ball/surface impact.

The coefficient of restitution (COR) is a measure of the "restitution" of a collision between two objects: how much of the kinetic energy remains for the objects to rebound from one another vs. how much is lost as heat, or work done deforming the objects.

The coefficient, e is defined as the ratio of relative speeds after and before an impact, taken along the line of the impact:

Alternatively, this may be expressed as:

The mathematics were developed by Sir Isaac Newton[2] in 1687. It is also known as Newton's experimental law, though it is really just another way to think about conservation of energy and momentum.

Line of impact- Its the line along which 'e' is defined or in absence of tangential reaction force between colliding surfaces force of impact is shared along this line between bodies. During physical contact between bodies during impact its line along common normal to pair of surfaces in contact of colliding bodies. hence 'e' is defined as 1-D parameter which is unit-less.

Range of values for e -treated as a constant

e is usually a positive, real number between 0 and 1.0:

e = 0: This is a perfectly 'inelastic' collision. The objects do not move apart after the collision, but instead they coalesce. Kinetic energy is converted to heat or work done in deforming the objects.

0 < e < 1: This is a real-world 'inelastic' collision, in which some kinetic energy is dissipated.

e = 1: This is a perfectly 'elastic' collision, in which no kinetic energy is dissipated, and the objects rebound from one another with the same relative speed with which they approached.

e < 0: A COR less than zero would represent a collision in which the separation velocity of the objects has the same direction (sign) as the closing velocity, implying the objects passed through one another without fully engaging. This may also be thought of as an incomplete transfer of momentum. An example of this might be a small, dense object passing through a large, less dense one – e.g., a bullet passing through a target, or a motorcycle passing through a motor home or a wave tearing through a dam.

e > 1: This would represent a collision in which energy is released, for example, nitrocellulose billiard balls can literally explode at the point of impact. Also, some recent articles have described superelastic collisions in which it is argued that the COR can take a value greater than one in a special case of oblique collisions.[3][4][5] These phenomena are due to the change of rebound trajectory caused by friction. In such collision kinetic energy is increased in a manner energy is released in some short of explosion. It is possible that

for a perfect explosion of a rigid system.

Maximum deformation phase-In any collision for 0<e≤1 there is a condition when for short moment along line of impact colliding bodies have same velocity when its condition of kinetic energy is lost in maximum fraction as heat , sound and light with deformation potential energy. for this short duration this collision e=0 and may be referred as inelastic phase.

The COR is a property of a 'pair' of objects in a collision, not a single object. If a given object collides with two different objects, each collision would have its own COR. When an object (singular) is described as having a coefficient of restitution, as if it were an intrinsic property without reference to a second object, the definition is assumed to be with respect to collisions with a perfectly rigid and elastic object.

Relationship with conservation of energy and momentum

Q. A cricket ball is bowled at 50 km/h towards a batsman who swings the bat at 30 km/h. How fast, approximately, does the ball move after impact?

Step 2: Approximating that the collision is perfectly elastic (e = 1), therefore speed of separation is approximately 80 km/h.

Step 3: Approximating the ball as being of much smaller mass than the bat, the momentum of the bat is (almost) unchanged by the impact, therefore the bat continues to move at (nearly) the same speed (30 km/h) after impact.

[This assumes that the ball is struck head-on by the bat, and that the collision is perfectly elastic. To obtain a more accurate answer, a measured value for the coefficient of restitution for cricket-ball-on-bat is needed, and use the equation for conservation of linear momentum simultaneously with the restitution formula.]

The coefficient of restitution entered the common vocabulary, among golfers at least, when golf club manufacturers began making thin-faced drivers with a so-called "trampoline effect" that creates drives of a greater distance as a result of the flexing and subsequent release of stored energy, imparting greater impulse to the ball. The USGA (America's governing golfing body) has started testing drivers for COR and has placed the upper limit at 0.83. According to one article (addressing COR in tennis racquets), "[f]or the Benchmark Conditions, the coefficient of restitution used is 0.85 for all racquets, eliminating the variables of string tension and frame stiffness which could add or subtract from the coefficient of restitution."[8]

The International Table Tennis Federation specifies that the ball shall bounce up 24–26 cm when dropped from a height of 30.5 cm on to a standard steel block thereby having a COR of 0.89 to 0.92.[9] For a hard linoleum floor with concrete underneath, a leather basketball has a COR around 0.81-0.85.[10]

In the case of a one-dimensional collision involving two objects, object A and object B, the coefficient of restitution is given by:

is the final velocity of object A after impact

is the final velocity of object B after impact

is the initial velocity of object A before impact

is the initial velocity of object B before impact

does not explicitly depend on the masses of the objects, it is important to note that the final velocities are mass-dependent. For two- and three-dimensional collisions of rigid bodies, the velocities used are the components perpendicular to the tangent line/plane at the point of contact, i.e. along the line of impact.

For an object bouncing off a stationary target,

is defined as the ratio of the object's speed prior to impact to that after impact:

is the speed of the object after impact

is the speed of the object before impact

In a case where frictional forces can be neglected and the object is dropped from rest onto a horizontal surface, this is equivalent to:

is the bounce height

is the drop height

The coefficient of restitution can be thought of as a measure of the extent to which mechanical energy is conserved when an object bounces off a surface. In the case of an object bouncing off a stationary target, the change in gravitational potential energy, PE, during the course of the impact is essentially zero; thus,

is a comparison between the kinetic energy, KE, of the object immediately before impact with that immediately after impact:

In a cases where frictional forces can be neglected (nearly every student laboratory on this subject[11]) and the object is dropped from rest onto a horizontal surface, the above is equivalent to a comparison between the PE of the object at the drop height with that at the bounce height. In this case, the change in KE is zero (the object is essentially at rest during the course of the impact and is also at rest at the apex of the bounce); thus:

The equations for collisions between elastic particles can be modified to use the COR, thus becoming applicable to inelastic collisions, as well, and every possibility in between.

is the final velocity of the first object after impact

is the final velocity of the second object after impact

is the initial velocity of the first object before impact

is the initial velocity of the second object before impact

is the mass of the first object

is the mass of the second object

The above equations can be derived from the analytical solution to the system of equations formed by the definition of the COR and the law of the conservation of momentum (which holds for all collisions). Using the notation from above where

represents the velocity before the collision and

Solving the momentum conservation equation for

and the definition of the coefficient of restitution for

Next, substitution into the first equation for

and then resolving for 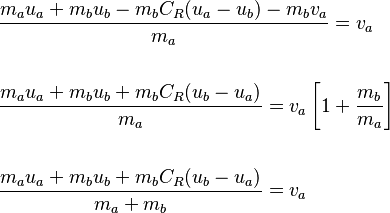 A similar derivation yields the formula for