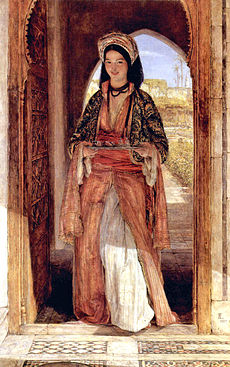 A coffee bearer, from the Ottoman quarters in Cairo, Egypt in the year 1857. 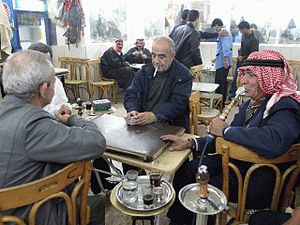 A coffeehouse in Damascus. 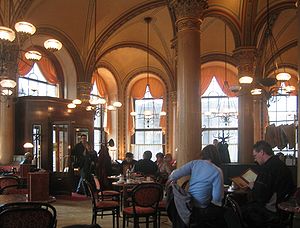 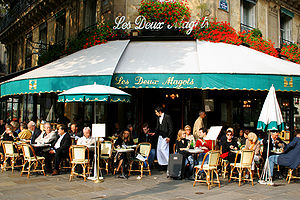 Les Deux Magots in Paris, once a famous haunt of French intellectuals 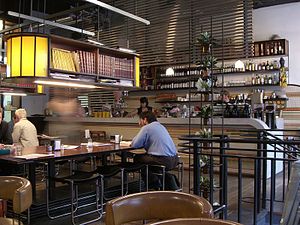 A coffee cafè in Melbourne. The city is said[by whom?] to have some of the best coffee in the world.

Coffee culture describes a social atmosphere or series of associated social behaviors that depends heavily upon coffee, particularly as a social lubricant. The term also refers to the diffusion and adoption of coffee as a widely consumed stimulant by a culture. In the late 20th century, particularly in the Western world and urbanized centers on the globe, espresso has been an increasingly dominant form.

The formation of culture around coffee and coffeehouses dates back to 14th century Turkey. Coffeehouses in Western Europe and the Eastern Mediterranean were traditionally social hubs, as well as artistic and intellectual centers. For example, Les Deux Magots in Paris, now a popular tourist attraction, was once associated with the intellectuals Jean-Paul Sartre and Simone de Beauvoir. In the late 17th and 18th centuries, coffeehouses in London became popular meeting places for artists, writers, and socialites and were also the center for much political and commercial activity. Elements of today's coffeehouses (slower paced gourmet service, tastefully decorated environments, or social outlets such as open mic nights) have their origins in early coffeehouses, and continue to form part of the concept of coffee culture.

In the United States in particular, the term is frequently used to designate the ubiquitous presence of hundreds of espresso stands and coffee shops in the Seattle metropolitan area and the spread of franchises of businesses such as Starbucks and their clones across the United States. Other aspects of coffee culture include the presence of free wireless Internet access for customers, many of whom do business in these locations for hours on a regular basis. The style of coffee culture varies by country, with an example being the strength of existing cafe style coffee culture in Australia used to explain the poor performance of Starbucks there.[1]

In many urban centers in the world, it is not unusual to see several espresso shops and stands within walking distance of each other or on opposite corners of the same intersection, typically with customers overflowing into parking lots. Thus, the term coffee culture is also used frequently in popular and business media to describe the deep impact of the market penetration of coffee-serving establishments.

Coffee culture frequently shows up in comics, television, and movies in a variety of ways. TV shows such as NCIS show characters constantly with espresso in hand or people distributing take-out cups to other characters. The comic strips Adam and Pearls Before Swine frequently center the strip around visiting or working at coffee shops.

Daily Mail writer Philip Nolan stated that the spread of the coffee culture in Ireland is largely accredited to American television shows Friends and Frasier, saying, "We saw it reflected in the lifestyles of our TV favorites the Friends gang in Central Perk (sic) drinking coffee instead of alcohol; Frasier and Niles having latte and biscotti in the [Café] Nervosa; every cop on TV being called out on a 911 just as he ambled back to his car with Dunkin' Donuts and a cup of strong, black coffee."[2]

A "coffeehouse or "café" is an establishment which primarily serves prepared coffee or other hot drinks. Historically cafés have been an important social gathering point in Europe. They were—and continue to be—venues where people gather to talk, write, read, entertain one another, or pass the time. During the 16th-century coffeehouses were banned in Mecca because they attracted political gatherings.

In addition to coffee, many cafés also serve tea, sandwiches, pastries, and other light refreshments. Some provide other services, such as wired or wireless internet access (thus the name, "internet café" — which has carried over to stores that provide internet service without any coffee) for their customers.

Many social aspects of coffee can be seen in the modern-day lifestyle. By absolute volume, the United States is the largest market for coffee, followed by Germany and Japan. Canada, Australia, Sweden and New Zealand are the other large coffee consuming countries. Tim Hortons is Canada's largest coffee chain, making millions of cups of coffee a day.[3] The Nordic countries consume the most coffee per capita, with Finland typically occupying the top spot with a per-capita consumption with 12 kg per year, followed by Norway, Iceland and Denmark.[4][5] Consumption has also vastly increased in recent years in the traditionally tea-drinking United Kingdom, but as of 2005 it was still below 5 kg per year. Turkish coffee is popular in Turkey, the Eastern Mediterranean, and southeastern Europe. Coffeehouse culture has a high penetration in much of the former Ottoman Empire, where Turkish coffee remains the dominant style of preparation.

Coffee has also been important in Austrian and in French culture since the late 19th and early 20th centuries. Vienna's coffeehouses are prominent in Viennese culture and known internationally, while Paris was important in the development of "café society" in the first half of the 20th century.

In some countries, notably in Northern Europe, coffee parties are a popular form of entertainment. Besides coffee, the host or hostess at the coffee party also serves cake and pastries, sometimes homemade. In the Nordic countries, Germany, Netherlands and Austria, strong black coffee is also regularly drunk along with or immediately after main meals such as lunch and dinner, and several times at work or school. In the café culture of these countries, especially Germany and Sweden, free refills of black coffee are often provided at restaurants and cafés, especially if customers have also bought a sweet treat or pastry with the coffee.

Coffee plays a large role in much of history and literature because of the large effects the coffee industry has had on cultures where it is produced or consumed. Coffee is often mentioned as one of the main economic goods used in imperial control of trade, and with colonized trade patterns in "goods" such as slaves, coffee, and sugar, which defined Brazilian trade, for example, for centuries. Coffee in culture or trade is a central theme and prominently referenced in much poetry, fiction, and regional history. 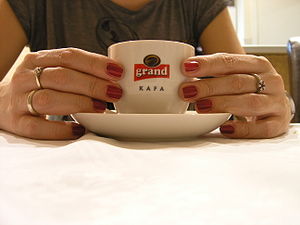 A coffee break is a routine social gathering for a snack and short downtime practiced by employees in business and industry. The coffee break allegedly originated in the late 19th century in Stoughton, Wisconsin, with the wives of Norwegian immigrants. The city celebrates this every year with the Stoughton Coffee Break Festival.[6] In 1951, Time noted that "[s]ince the war, the coffee break has been written into union contracts".[7] The term subsequently became popular through a Pan-American Coffee Bureau ad campaign of 1952 which urged consumers, "Give yourself a Coffee-Break — and Get What Coffee Gives to You."[8] John B. Watson, a behavioral psychologist who worked with Maxwell House later in his career, helped to popularize coffee breaks within the American culture.[9]

Coffee breaks usually last from 10 to 20 minutes and frequently occur at the end of the first third of the work shift. In some companies and some civil service, the coffee break may be observed formally at a set hour. In some places, a "cart" with hot and cold beverages and cakes, breads and pastries arrives at the same time morning and afternoon, an employer may contract with an outside caterer for daily service, or coffee breaks may take place away from the actual work-area in a designated cafeteria or tea room.