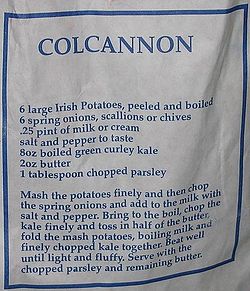 Colcannon recipe on a bag of potatoes

Colcannon (Irish: cál ceannann, meaning "white-headed cabbage") is a traditional Irish dish mainly consisting of mashed potatoes with kale or cabbage. It is also the name of a song about the dish.

Colcannon is traditionally made from mashed potatoes and kale (or cabbage), with milk (or cream), butter, salt and pepper added. It can contain other ingredients such as spring onions, leeks, onions and chives. There are many regional variations of this dish.[1] It is often eaten with boiled ham or Irish bacon. At one time it was a cheap, year-round staple food,[2] though nowadays it is usually eaten in autumn/winter, when kale comes into season.[3]

An old Irish Halloween tradition is to serve colcannon with a ring and a thimble hidden in the fluffy green-flecked dish. Prizes of small coins such as threepenny or sixpenny bits were also concealed in it.[4]

The Welsh dish cawl cennin, despite the somewhat similar sound of the expression, is etymologically unrelated to colcannon, and is a leek soup, literally "broth (of) leeks."[5]

The song "Colcannon", also called "The Skillet Pot", is a traditional Irish song that has been recorded by many artists, including Mary Black.[4][6] It begins:

Did you ever eat Colcannon, made from lovely pickled cream?
With the greens and scallions mingled like a picture in a dream.
Did you ever make a hole on top to hold the melting flake
Of the creamy, flavoured butter that your mother used to make?

Yes you did, so you did, so did he and so did I.
And the more I think about it sure the nearer I'm to cry.
Oh, wasn't it the happy days when troubles we had not,
And our mothers made Colcannon in the little skillet pot.