From Infogalactic: the planetary knowledge core
Jump to: navigation, search
This article is about the village on the Hudson River. For the town in western New York, see Coldspring, New York. For the hamlet on Long Island, see Cold Spring Harbor, New York.

Cold Spring is a village in the town of Philipstown in Putnam County, New York, United States. The population was 1,983 at the 2010 census.[1] It borders the smaller village of Nelsonville. The central area of the village is on the National Register of Historic Places as the Cold Spring Historic District due to its many well-preserved 19th-century buildings, constructed to accommodate workers at the nearby West Point Foundry (itself a Registered Historic Place today). The town is the birthplace of General Gouverneur K. Warren, who was an important figure in the Union Army during the Civil War. The village, located in the Hudson Highlands, sits at the deepest point of the Hudson River, directly across from West Point. Cold Spring serves as a weekend getaway for many residents of New York City.

Commuter service to New York City is available via the Cold Spring train station, served by Metro-North Railroad. The train journey is about an hour and ten minutes to Grand Central Terminal.

Until 1818, when the West Point Foundry was established by Gouverneur Kemble, Cold Spring was a small settlement nestled on the shores of the Hudson River near the river's narrowest point. Cold Spring served as an industrial base for the next 150 years. A battery factory operated from 1952 to 1979, polluting nearby Constitution Marsh, before the marsh was cleaned (at great expense) in the 1990s. 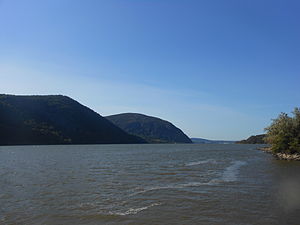 The village is bordered by the Hudson River to the west, and is bound by the Hudson Highlands State Park to the north, where Mount Taurus and Breakneck Ridge rise steeply and dramatically out of the banks of the Hudson and form two basically parallel ridges that track each other inland. The valley between them has an abandoned dairy farm, two lakes, and a camp. The view from the river bank is the Constitution Marsh and the US Military Academy (West Point) slightly to the south, and Crow's Nest and Storm King Mountain to the west and northwest. All of this considered, the village is nestled in the most prominent vertical terrain on the Hudson River north of New York City prior to the Shawangunk and Catskill ranges. Being bound by these formidable terrain features has kept the size of the village small, and prevented the suburban sprawl that has come about in the less-constrained regions to the north and south and in the New York Metropolitan area generally. This unique sense of place, and the village's historic housing stock, have made it a very popular weekend destination for tourists from New York City. Its oldest current home is located on 191 Main Street and was built in 1814. Some say Abraham Lincoln visited that house when he visited Cold Spring.

Out of the 910 households, 24.5% had children under the age of 18 living with them, 45.8% were married couples living together, 8.5% had a female householder with no husband present, and 41.9% were non-families. 69% of all households were made up of individuals and 18.1% had someone living alone who was 65 years of age or older. The average household size was 2.18 and the average family size was 2.88.

Surprise Lake Camp is located in Cold Spring when it was the last stop on the Hudson River Line in 1902. Surprise Lake Camp is a Jewish Summer Camp funded by the UJA Federation of New York. Some famous campers were Eddie Cantor, Larry King, Neil Diamond, Jerry Stiller, Neil Simon, and many more. More information can be found on Surprise Lake's Wikipedia page.[7]

Cold Spring is home to: