From Infogalactic: the planetary knowledge core
Jump to: navigation, search
Not to be confused with Clerkenwell Prison otherwise known as the Clerkenwell House of Detention.
File:Coldbath-fields-plan-mayhew-p283.jpg
Plan of the prison. 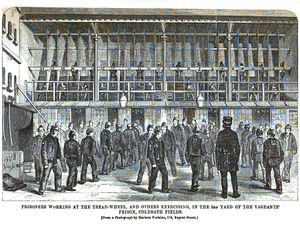 Vagrants exercising and on the treadmill. 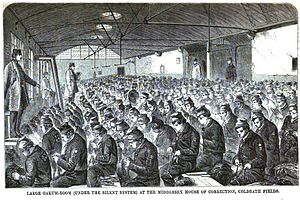 Coldbath Fields Prison, also formerly known as the Middlesex House of Correction and Clerkenwell Gaol and informally known as the Steel,[1] was a prison in the Mount Pleasant area of Clerkenwell, London. Founded during the reign of James I (1603–1625), the prison was completely rebuilt in 1794 and extended in 1850.[2] It was used to house prisoners on short sentences of up to two years. There were separate blocks for felons, misdemeanants and vagrants.

Coldbath Fields Prison (also known as the Middlesex House of Correction) was originally a prison run by local magistrates and where most prisoners served short sentences. Coldbath Fields also served as a debtor's prison. It took its name from Cold Bath Spring, a medicinal spring discovered in 1697.[3] The prison housed men, women and children until 1850, when the women and children moved to Tothill Fields Bridewell in Victoria and Coldbath was restricted to adult male offenders over the age of 17. Despite its aspirations to be a more humanitarian prison (it was designed by John Howard), it became notorious for its strict regime of silence[4] and its use of the treadmill.

During the early 19th century, the prison temporarily housed members of the Cato Street Conspiracy. In March 1877 a fire, which started in the bakehouse, destroyed the treadmill house; no prisoners were hurt but two firemen were injured.[5]

The prison closed in 1877.[6] The site was transferred to the Post Office in 1889 and its buildings were gradually replaced. The last sections were demolished in 1929 for an extension of the Letter Office. Today, the site is occupied by the Mount Pleasant sorting office.[7]