The ColecoVision is Coleco Industries' second-generation home video-game console which was released in August 1982. The ColecoVision offered a closer experience to more powerful arcade game systems compared to competitors such as the Atari 2600, along with the means to expand the system's basic hardware. Released with a catalog of 12 launch titles, with an additional 10 games announced for 1982, approximately 145 titles in total were published as ROM cartridges for the system between 1982 and 1984.[1] River West Brands currently owns the ColecoVision brand name.[2]

In 2009, IGN named the ColecoVision their 12th-best video-game console out of their list of 25, citing "its incredible accuracy in bringing current-generation arcade hits home."[3]

Coleco licensed Nintendo's Donkey Kong as the official pack-in cartridge for all ColecoVision consoles, helping to boost the console's popularity. By Christmas of 1982, Coleco had sold more than 500,000 units,[4][5] in part on the strength of its bundled game.[6] The ColecoVision's main competitor was the arguably more advanced but less commercially successful Atari 5200.[7][8][9]

The ColecoVision was distributed by CBS Electronics outside of North America, and was branded the CBS ColecoVision.

Sales quickly passed 1 million in early 1983,[10] before the video game crash of 1983. By the beginning of 1984, quarterly sales of the ColecoVision had dramatically decreased.[11]

Over the next 18 months, the Coleco company ramped down its video game division, ultimately withdrawing from the video game market by the end of the summer of 1985.[12][13] The ColecoVision was officially discontinued by October 1985.[14] Total sales of the ColecoVision are uncertain but were ultimately in excess of 2 million units, as sales had reached that number by the spring of 1984,[11] while the console continued to sell modestly up until its discontinuation the following year.[15]

In 1983 Spectravideo announced the SV-603 ColecoVision Video Game Adapter for its SV-318 computer. The company stated that the $70 product allowed users to "enjoy the entire library of exciting ColecoVision video-game cartridges".[16] In 1986, Bit Corporation produced a ColecoVision clone called the Dina, which was sold in the United States by Telegames as the Telegames Personal Arcade.[17] 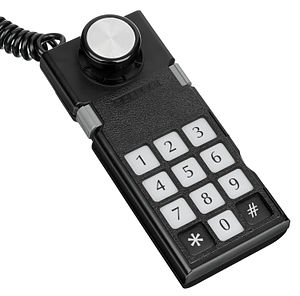 The ColecoVision's controller featured a numberpad that could be fitted with overlays.

The main console unit consists of a 14×8×2 inch rectangular plastic case that houses the motherboard, with a cartridge slot on the right side and connectors for the external power supply and RF jack at the rear. The controllers connect into plugs in a recessed area on the top of the unit.

The design of the controllers is similar to that of Mattel's Intellivision—the controller is rectangular and consists of a numeric keypad and a set of side buttons. In place of the circular control disc below the keypad, the Coleco controller has a short, 1.5-inch joystick. The keypad is designed to accept a thin plastic overlay that maps the keys for a particular game. Each ColecoVision console shipped with two controllers.

All first-party cartridges and most third-party software titles feature a 12-second pause before presenting the game select screen.[18] This delay results from an intentional loop in the console's BIOS to enable on-screen display of the ColecoVision brand. Companies like Parker Brothers, Activision, and Micro Fun bypassed this loop, which necessitated embedding portions of the BIOS outside the delay loop, further reducing storage available to actual game programming. 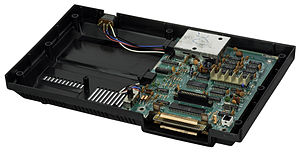 The inside of the ColecoVision with RF shielding removed. 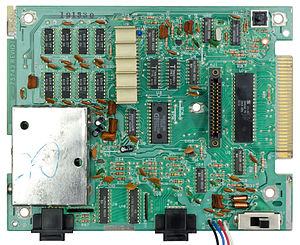 The ColecoVision ran off the Z80A, a commonly used CPU in other game systems.

From its introduction, Coleco touted the ColecoVision's hardware expandability by highlighting the Expansion Module Interface on the front of the unit. These hardware expansion modules and accessories were sold separately. 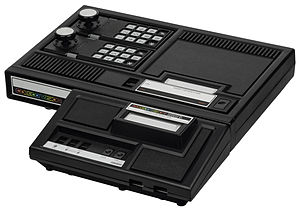 The Expansion Module #1 allowed the ColecoVision to play any game from the Atari 2600.

In 1997, Telegames released Personal Arcade Vol. 1, a collection of ColecoVision games for Microsoft Windows,[26] and a 1998 follow-up, Colecovision Hits Volume One.[27]

The value of the ColecoVision as a 1980s pop culture icon was discussed on VH1's I Love The 80's Strikes Back.[29] Several television series have aired episodes that reference or parody the console: South Park,[30] Family Guy[31] and Everybody Hates Chris.[32]