The Colgate-Palmolive Company is an American multinational consumer products company focused on the production, distribution and provision of household, health care and personal products, such as soaps, detergents, and oral hygiene products (including toothpaste and toothbrushes). Under its "Hill's" brand, it is also a manufacturer of veterinary products. The company's corporate offices are on Park Avenue in Midtown Manhattan, New York City.[4] 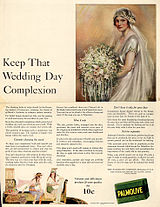 In 1806, William Colgate, an English soap and candle maker, established a starch, soap and candle factory on Dutch Street in New York City under the name of "William Colgate & Company". In 1833, he suffered a severe heart attack, stopping his business' sales. After convalescence he continued with his business. In the 1840s, the firm began selling individual cakes of soap in uniform weights. In 1857 Colgate died and the company was reorganized as "Colgate & Company" under the management of Samuel Colgate, his son, who did not want to continue the business but thought it would be the right thing to do. In 1872, Colgate introduced Cashmere Bouquet, a perfumed soap. In 1873, the firm introduced its first toothpaste, an aromatic toothpaste sold in jars.[5] In 1896, the company sold the first toothpaste in a tube, Colgate Ribbon Dental Cream (invented by dentist Washington Sheffield). Also in 1896, Colgate hired Martin Ittner and under his direction founded one of the first applied research labs.[6] By 1908 they initiated mass sales of toothpaste in tubes. William's other son, James Boorman Colgate, was a primary trustee of Colgate University (formerly Madison University). 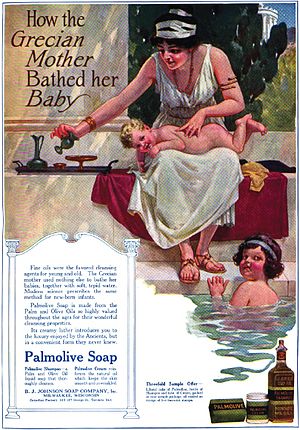 In Milwaukee, Wisconsin, the B.J. Johnson Company was making a soap entirely of palm oil and olive oil, the formula of which was developed by B.J. Johnson in 1898. The soap was popular enough to rename their company after it - "Palmolive".[7] Around the start of the 20th century Palmolive, which contained both palm and olive oils, was the world's best-selling soap. Extensive advertising included the radio programs The Palmolive Hour (1927-1931) and Palmolive Beauty Box Theater (1934-1937). A Missouri-based soap manufacturer known as Peet Brothers merged with Palmolive to become Palmolive-Peet. In 1928, Palmolive-Peet bought the Colgate Company to create the Colgate-Palmolive-Peet Company. In 1953 "Peet" was dropped from the title, leaving only "Colgate-Palmolive Company", the current name.

Colgate-Palmolive has long been in competition with Procter & Gamble, the world's largest soap and detergent maker. P&G introduced its Tide laundry detergent shortly after World War II, and thousands of consumers turned from Colgate's soaps to the new product. Colgate lost its number one place in the toothpaste market when P&G added fluoride to its toothpaste. In the beginning of TV, Colgate-Palmolive wished to compete with P&G as a sponsor of soap operas and sponsored many soaps in full or in part including The Doctors.

George Henry Lesch, president, CEO, and chairman of the board of Colgate-Palmolive in the 1960s and 1970s, during that time transformed it into a modern company with major restructuring.

In 2005, Colgate sold the under-performing brands Fab, Dynamo, Arctic Power, ABC, Cold Power and Fresh Start, as well as the license of the Ajax brand for laundry detergents in the US, Canada and Puerto Rico, to Phoenix Brands, LLC as part of their plan to focus on their higher margin oral, personal, and pet care products.[8][9]

In 2006, Colgate-Palmolive announced the intended acquisition of Tom's of Maine, a leading maker of natural toothpaste, for US $100 million.[10] Tom's of Maine was founded by Tom Chappell in 1970.

Today, Colgate has numerous subsidiary organizations spanning 200 countries, but it is publicly listed in only two, the United States and India.

In 1890, Madison University in New York State was renamed Colgate University in honor of the Colgate family following decades of financial support and involvement.[13]

The Colgate-Palmolive Company has sponsored a non-profit track meet open to women of all ages called the Colgate Women's Games.[14] The Colgate Women's Games is the nation's largest amateur track series open to all girls from elementary school through college. Held at Brooklyn's Pratt Institute, competitors participate in preliminary meets and semi-finals over five weekends throughout January. Finalists compete for trophies and educational grants-in-aid from Colgate-Palmolive Company at New York City's Madison Square Garden in February. For more than 20 years, the company supports the Starlight Children Foundation which is a non profit organization dedicated to help seriously ill children and their families. The mission is to help children to cope with pain, fear and isolation through entertainment, family activities and education.(2012)

The Ethical Consumer Research Association once recommended that its readers do not buy Colgate because of its use of animal testing, though this is no longer the case.[citation needed] In 2011, Colgate-Palmolive was one of the first companies recognized by PETA (People for the Ethical Treatment of Animals) under the new "working for regulatory change" category for companies that test on animals only when mandated by government regulations and are actively seeking alternatives to animal testing.[15] This relates to the corporation's decision to continue to participate in the profitable Chinese market, where some animal testing is still a regulatory requirement.[16] Other ethical companies have chosen to decline entry to this market.[17]

In 2011 the company chose to retain the use of the antibacterial agent triclosan in its market-leading Total toothpaste range, despite withdrawing it from several other product ranges, following concerns about triclosan's impact on health and the environment.[19]

Colgate consumes approximately 0.2 percent of the combined palm oil output of Malaysia, Indonesia and Thailand,[20] the cultivation of which is known for environmental impacts on a global level including: deforestation, loss of natural habitats of critically endangered species, and increased greenhouse gas emissions.

Colgate-Palmolive, as a successor to The Mennen Company, is one of about 300 companies held potentially responsible for hazardous waste at the Chemsol federal Superfund site in Piscataway, New Jersey.[21] Their involvement in this site may have contributed to the contamination of an estimated 18,500 cubic yards (14,100 m3) of soil with volatile organic compounds (VOCs), PCBs, and lead off-site. A proposed $23 million agreement with the government and state of New Jersey would require Colgate-Palmolive and the other involved companies to pay for the cleanup of this hazardous waste that is contaminating the soil as well as the groundwater.[22] The company completed a LEED Silver certified manufacturing plant in Morristown, Tennessee in March 2008 which was the first of its kind in the U.S. The new LEED silver certified plant in Tennessee produces the Colgate Total toothpaste.[23]

Current members of the board of directors of Colgate-Palmolive are:

Colgate-Palmolive was named one of the "100 Best Companies for Working Mothers" in 2004 by Working Mothers magazine. The 2012 Human Rights Campaign "report card" on American businesses gave Colgate an A for its support of diversity in the workplace.

Vintage commercials for many of these discontinued C-P products can still be seen on YouTube.

In the U.S., the company operates approximately 60 properties of which 14 are owned.[3] Major U.S. manufacturing and warehousing facilities used by the oral, personal and home care segment of Colgate-Palmolive are located in Morristown, New Jersey (previously the headquarters of the Mennen company prior to their 1991 buyout, and still HQ of the Mennen division); Morristown, Tennessee; and Cambridge, Ohio. The pet nutrition segment has major facilities in Bowling Green, Kentucky; Emporia, Kansas; Topeka, Kansas; Commerce, California; and Richmond, Indiana. The primary research center for oral, personal and home care products is located in Piscataway, New Jersey and the primary research center for pet nutrition products is located in Topeka, Kansas.

Colgate-Palmolive has closed or is in the process of phasing out production at certain facilities under a restructuring program initiated in 2004 and has built new state-of-the-art plants to produce toothpaste in the U.S., Mexico and Poland.[46][47]

Colgate-Palmolive's chief manufacturing plant is located in Burlington, New Jersey, producing all of the fragrance and flavor oils for the company's facilities around the world.

The iconic hand on the Palmolive dishwashing soap label belongs to Elizabeth Barbour. The image is an illustration of a photograph taken in 1985 when the Colgate-Palmolive Company updated the image, hiring Barbour, then a hand model with the Ford Agency in New York City.