The coalition was formed for the first time in 1987 in order to run to the simultaneous legislative election and European Parliament election that were held on July 19 of that year.

Since the beginning of the coalition, the member parties have never participated separately in any election. The Communist Party is the major force inside it and has the majority of places in the electoral lists, however, the Greens also have an important presence and elected 2 members of parliament among the 17 elected by the coalition in the last legislative election. Each party has its own parliamentary group and counts as a separate party in official issues.

The present symbol of CDU shows the PCP's symbol and the PEV's symbol, an hammer and sickle and a sunflower, respectively, with the respective names below. That symbol replaced a former one that featured three hexagons with the inscription: CDU and was often used with a beehive. That was sometimes said to mean that CDU worked just like a bee (collectively and every day) and the hexagons were meant to represent the cell-based Leninist organization of the PCP.

The coalition has a youth wing, called Juventude CDU, that develops political work in youth related subjects, along with youth-oriented activities, mainly during the electoral campaigns. The Juventude CDU is mainly composed by members of the youth wings of the parties that compose the CDU, the Portuguese Communist Youth and the Ecolojovem.

Assembly of the Republic 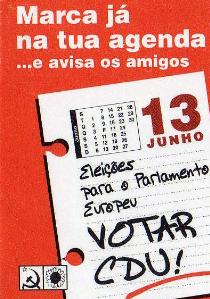 CDU sticker: Schedule and alert your friends: in 13 June, Vote CDU to the European Parliament 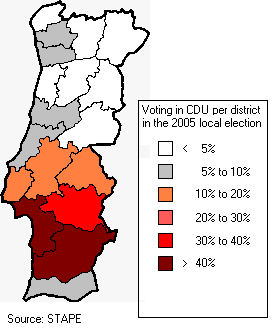 CDU results in the local election of 2005. (Azores and Madeira are not shown)