College Park is a city in Prince George's County, Maryland.[4] The population was 30,413 at the 2010 United States Census. It is best known as the home of the University of Maryland, College Park, and since 1994 the city has also been home to the "Archives II" facility of the U.S. National Archives, and is also home to the National Weather Service's Weather Prediction Center.

College Park was developed beginning in 1889 near the Maryland Agricultural College (later the University of Maryland) and the College Station stop of the Baltimore and Ohio Railroad. The suburb was incorporated in 1945 and included the subdivisions of College Park, Lakeland, Berwyn, Oak Spring, Branchville, Daniel's Park, and Hollywood. The original College Park subdivision was first plotted in 1872 by Eugene Campbell. The area remained undeveloped and was re-platted in 1889 by John O. Johnson and Samuel Curriden, Washington real estate developers. The original 125-acre (0.51 km2) tract was divided into a grid-street pattern with long, narrow building lots, with a standard lot size of 50 feet (15 m) by 200 feet (61 m). College Park developed rapidly, catering to those who were seeking to escape the crowded Washington, D.C., as well as to a rapidly expanding staff of college faculty and employees. College Park originally included single-family residences constructed in the Shingle, Queen Anne, and Stick styles, as well as modest vernacular dwellings. Commercial development increased in the 1920s, aided by the increased automobile traffic and the growing campus along Baltimore Avenue / Route 1. By the late 1930s, most of the original subdivision had been partially developed. Several fraternities and sororities from the University of Maryland built houses in the neighborhood. After World War II, construction consisted mostly of infill of ranch and split-level houses. After incorporation in 1945, the city continued to grow and build a municipal center in 1959.[5]

The Lakeland neighborhood was developed beginning in 1892 around the Baltimore and Ohio Railroad, whose Branchville and Calvert Road depots were located approximately one mile to the north and south, respectively. Lakeland was created by Edwin Newman, who improved the original 238 acres (0.96 km2) located to the west of the railroad. He also built a number of the original homes, a small town hall, and a general store. The area was originally envisioned as a resort-type community. However, due to the flood-prone, low-lying topography, the neighborhood attracted a lower-income population became an area for African-American settlement. Around 1900, the Baltimore Gold Fish Company built five artificial lakes in the area to spawn goldfish and rare species of fish. A one-room school was built in 1903 for the African-American population; a new school was built in 1925.[5]

The Berwyn neighborhood was developed beginning about 1885 adjacent to the Baltimore and Ohio Railroad. It was created by Francis Shannabrook, a Pennsylvanian who purchased a tract of land between Baltimore Avenue and the railroad tracks. Shannabrook established a small depot, built a general store, and erected approximately 15 homes in the area to attract moderate-income families looking to move out of Washington. The neighborhood began to grow after 1900 when the City and Suburban Electric Railway entered the area. By 1925 there were approximately 100 single-family homes; mostly two-story, wood-frame buildings. The community housing continued to develop in the 1930s and 1940s with one story bungalows, capes, and Victorians, and later grew to include raised ranches and split level homes.[5]

The Daniels Park neighborhood was developed beginning in 1905 on the east and west sides of the City and Suburban Electric Railway in north College Park. Daniels Park was created by Edward Daniels on 47 acres (19 ha) of land. This small residential subdivision was improved with single-family houses arranged along a grid pattern of streets. The houses range in style from American Foursquares to bungalows, and were built between 1905 and the 1930s.[5]

The Hollywood neighborhood was developed beginning in the early 20th century along the City and Suburban Electric Railway. Edward Daniels, the developer of Daniels Park, planned the Hollywood subdivision as a northern extension of that earlier community. Development in Hollywood was slow until after World War II when Albert Turner acquired large tracts of the northern part of the neighborhood in the late 1940s. Turner was able to develop and market brick and frame three-bedroom bungalows beginning in 1950. By 1952, an elementary school had been built. The Hollywood Park, a 21-acre (8.5 ha) facility along the Baltimore and Ohio Railroad line, is operated by the Maryland-National Capital Park and Planning Commission.[5]

In 1943, the Washington Senators held their spring training camp in College Park. To conserve rail transport during World War II, the location of the 1943 Major League Baseball spring training camps was limited to an area east of the Mississippi River and north of the Ohio River.[6]

On September 24, 2001, a multiple-vortex F3 tornado hit the area. This storm moved at peak intensity through the University of Maryland, College Park campus, and then moved parallel to I-95 through the Laurel area, where F3 damage was also noted. The damage path from this storm was measured at 17.5 miles (28.2 km) in length, and this tornado caused two deaths and 55 injuries, along with $101 million in property damage. The two deaths were sisters who died when their car was picked up and hurled over a building before being slammed to the ground; both young women were University of Maryland students.[7] This tornado was part of the Maryland, Virginia, and Washington, D.C., tornado outbreak of 2001, one of the most dramatic recent tornado events to directly affect the Baltimore-Washington metropolitan area. 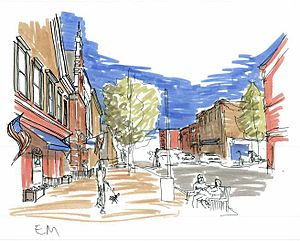 Image produced at the Student Design Charrette for a new College Park.

By the turn of the 21st century, College Park began experiencing significant development pressure. Both students and city residents have acknowledged the city's lack of amenities and poor sense of place. In 2002, the city and county passed the Route 1 Sector Plan, which allowed and encouraged mixed use development on College Park's main roadway. Recent projects like the East Campus Redevelopment Initiative, the University View and Northgate Condos give many in the community hope that the city may one day be like other notable college towns around the country, with a vibrant downtown and a diverse population. The University of Maryland's Student Government Association sponsored a design charrette in April 2006 to envision the future of College Park. In July 2006, a group of students created Rethink College Park—a community group providing a website to share information about development and encourage public dialogue. As of 2010[update], there have been notable architectural additions to the city of College Park, Maryland. A parking garage was completed in the downtown area in August 2009 near the intersection of Route 1 and Knox Road. The View apartments completed two new towers to add to their apartment complex, and next to the View apartments, graduate school apartment towers were being constructed.

There were 6,757 households of which 18.4% had children under the age of 18 living with them, 30.6% were married couples living together, 7.9% had a female householder with no husband present, 3.7% had a male householder with no wife present, and 57.8% were non-families. 24.8% of all households were made up of individuals and 6.6% had someone living alone who was 65 years of age or older. The average household size was 2.79 and the average family size was 3.18.

There were 6,030 households out of which 19.8% had children under the age of 18 living with them, 38.6% were married couples living together, 8.3% had a female householder with no husband present, and 49.6% were non-families. 25.7% of all households were made up of individuals and 9.1% had someone living alone who was 65 years of age or older. The average household size was 2.65 and the average family size was 3.11.

The Government of College Park is a Council-Manager form of government. The city manager is appointed by the city council and the mayor elected every two years. The council has eight councilmembers, representing four districts in the city. City Council meetings are held once a week at the College Park City Hall.

The current Mayor of College Park is Andrew M. Fellows, who took office in 2009. Previous mayors were:

The climate in this area is characterized by hot, humid summers and generally mild to cool winters. According to the Köppen Climate Classification system, College Park has a humid subtropical climate, abbreviated "Cfa" on climate maps.[13]

According to the City's 2009 Comprehensive Annual Financial Report,[14] the top employers in the city are:

College Park Airport is one of the oldest continuously operating airports in the United States and is one of the oldest airports in the world, having been in continuous operation since 1909. Its future status is uncertain, as it lies just a few miles outside the restricted airspace of Washington, D.C. In 1977, the airport was added to the National Register of Historic Places.[15] 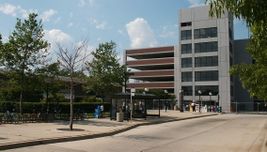 College Park has a station on Washington Metro's Green Line.

College Park had streetcar service from 1903 to 1962 along what is now Rhode Island Avenue and the College Park Trolley Trail.

The following is a list of historic sites in College Park identified by the Maryland-National Capital Park and Planning Commission.[16] Part of the city is located within the Calvert Hills Historic District; listed on the National Register of Historic Places in 2002.[17]

The city is part of the Washington, D.C. television market (DMA #9). 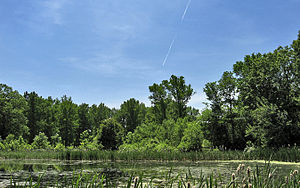 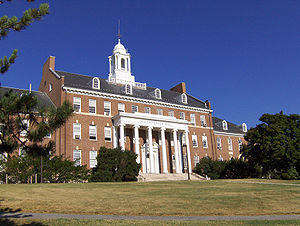 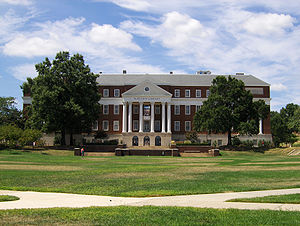 Like many college towns, College Park has had its share of political controversy. Occasionally, University of Maryland students plan voter registration drives and seek to elect one of their own to the city council. City residents, including students living within the city are eligible[19] to run for city council if they are at least 18 years of age. Over the past twenty years there have been multiple attempts, none of which were successful until Marcus Afzali won a seat in 2009.