Collier's was an American magazine, founded in 1888 by Peter Fenelon Collier. It was initially launched as Collier's Once a Week, then changed in 1895 to Collier's Weekly: An Illustrated Journal,[1] and finally shortened in 1942 to simply Collier's.[2] The magazine ceased publication with the January 4, 1957 issue, though a brief, failed attempt was made to revive the Collier's name with a new magazine in 2012.[3]

As a result of Peter Collier's pioneering investigative journalism, Collier's Weekly established a reputation as a proponent of social reform. When attempts by various companies to sue Collier ended in failure, other magazines became involved in what Theodore Roosevelt described as "muckraking journalism."

Irish immigrant Peter F. Collier (1849–1909) left Ireland at age 17.[4] Although he went to a seminary to become a priest, he instead started work as a salesman for P. J. Kenedy, publisher of books for the Roman Catholic market. When Collier wanted to boost sales by offering books on a subscription plan, it led to a disagreement with Kenedy, so Collier left to start his own subscription service. P.F. Collier & Son began in 1875, expanding into the largest subscription house in America with sales of 30 million books during the 1900-1910 decade.[5]

In April 1888, Collier's Once a Week was launched as a magazine of "fiction, fact, sensation, wit, humor, news". It was sold with a the biweekly Collier's Library of novels and popular books at bargain rates and as a stand-alone priced at seven cents.[4] By 1892, with a circulation climbing past the 250,000 mark, Collier's Once a Week was one of the largest selling magazines in the United States. The name was changed to Collier's Weekly: An Illustrated Journal in 1895. With an emphasis on news, the magazine became a leading exponent of the halftone news picture. To fully exploit the new technology, Peter Collier recruited James H. Hare, one of the pioneers of photojournalism. 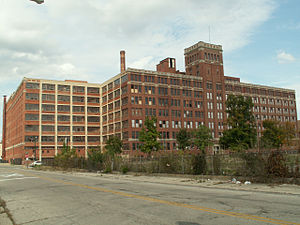 Collier's only son, Robert J. Collier became a full partner in 1898. By 1914, it was known as Collier's: The National Weekly. Peter Collier died in 1909.[6] When Robert Collier died in 1918, he left a will that turned the magazine over to three of his friends: Samuel Dunn, Harry Payne Whitney and Francis Patrick Garvan.

In 1924 Crowell moved the printing operations from New York to Springfield, Ohio but kept the editorial and business departments in New York. Reasons given for moving print operations included conditions imposed by unions in the printing trade, expansion of the Gansevoort Market into the property occupied by the Collier plant and "excessive postage involved in mailing from a seaboard city under wartime postal rates.[7] After 1924, printing of the magazine was done at the Crowell-Collier printing plant on West Main Street in Springfield, Ohio.[7] The factory complex, which is still standing, was built between 1899 and 1946, and incorporates seven buildings that together have more than 846,000 square feet (78,600 m2)—20 acres (81,000 m2)—of floor space. 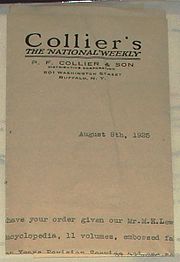 When Norman Hapgood became editor of Collier's Weekly in 1903, he attracted many leading writers. In May 1906, he commissioned Jack London to cover the San Francisco earthquake, a report accompanied by 16 pages of pictures. Under Hapgood's guidance, Collier's Weekly began publishing the work of investigative journalists such as Samuel Hopkins Adams, Ray Stannard Baker, C.P. Connolly and Ida Tarbell. Hapgood's approach had great impact, resulting in such changes as the reform of the child labor laws, slum clearance and women's suffrage. In April 1905, an article by Upton Sinclair, "Is Chicago Meat Clean?", persuaded the Senate to pass the 1906 Meat Inspection Act.

Starting October 7, 1905, Adams startled readers with "The Great American Fraud," an 11-part Collier's series. Analyzing the contents of popular patent medicines, Adams pointed out that the companies producing these medicines were making false claims about their products and some were health hazards. Hapgood launched the series with the following editorial:

In the present number we print the first article in "The Great American Fraud" series, which is to describe thoroughly the ways and methods, as well as the evils and dangers, of the patent medicine business. This article is but the opening gun of the campaign, and is largely introductory in character, but it will give the reader a good idea of what is to come when Mr. Adams gets down to peculiarities. The next article, to appear two weeks hence, will treat of "Peruna and the 'Bracers'," that is, of those concoctions which are advertised and sold as medicines, but which in reality are practically cocktails.

Since these articles on patent medicine frauds were announced in Collier's some time ago, most of the makers of alcoholic and opiated medicines have been running to cover, and even the Government has been awakened to a sense of responsibility. A few weeks ago the Commissioner of Internal Revenue issued an order to his Collectors, ordering them to exact a special tax from the manufacturer of every compound composed of distilled spirits, "even though drugs have been added thereto." The list of "tonics," "blood purifiers" and "cures" that will come under this head has not yet been published by the Treasury Department, but it is bound to include a good many of the beverages which, up to the present time, have been soothing the consciences while stimulating the palates of the temperance folk. The next official move will doubtless be against the opium-sellers; but these have likewise taken fright, and several of the most notorious "consumption cures" no longer include opium or hasheesh in their concoction.[5]

Hapgood had a huge influence on public opinion, and between 1909 and 1912, he succeeded in doubling the circulation of Collier's from a half million to a million. When he moved on to Harper's Weekly in 1912, he was replaced as editor for the next couple years by Robert J. Collier, the son of the founder. Arthur H. Vandenberg, later to become a prominent Senator, had a brief stint as a Collier's editor during the 1900s. H. C. Witwer was a war correspondent in France during World War I. Rob Wagner covered the film industry for Collier's during the 1920s. They reversed their position on prohibition in 1925. This was due to the difficulty in enforcing the referendum, and people's unwillingness to stay away from alcohol. The new law brought about bribing, thieving, corruption and other ills, which far exceeded their expectations. This new alignment gained favor with the public and helped to rebuild circulation.

Writers such as Martha Gellhorn and Ernest Hemingway, who reported on the Spanish Civil War, helped boost the circulation. Winston Churchill, who wrote an account of the First World War, was a regular contributor during the 1930s, but his series of articles ended in 1938 when he became a minister in the British government. Carl Fick was a Collier's staff writer prior to World War II.

Collier's circulation battle with The Saturday Evening Post led to the creation of The Collier Hour "The Magazine of the Air," broadcast on the NBC Blue Network from 1927 to 1932.[8] It was radio's first major dramatic anthology series, adapting stories and serials from Collier's. Airing on the Wednesday before weekly publication, it later switched to Sundays to avoid spoilers with stories being aired simultaneously with the magazine. In 1929, in addition to the dramatizations, it offered music, news, sports and comedy. 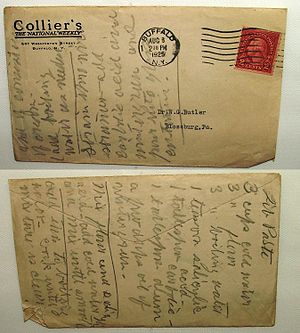 The Mask of Fu Manchu, which was adapted into a 1932 film and a 1951 Wally Wood comic book, was first published as a 12-part Collier's serial, running from May 7 to July 23, 1932. The May 7 issue displayed a memorable cover illustration by famed maskmaker Władysław T. Benda, and his mask design for that cover was repeated by many other illustrators in subsequent adaptations and reprints.[5]

A 1951 condensed version of the book Day of the Triffids by John Wyndham also appeared.[9] 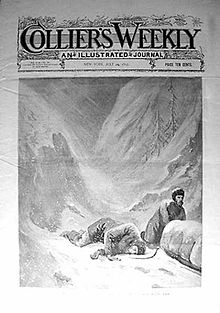 Kate Osann's Tizzy cartoons first appeared in Collier's. The redheaded Tizzy was a teenage American girl who wore horn-rimmed glasses with triangular lenses. Tizzy was syndicated by NEA after Collier's folded. The cartoons were in color in Collier's but black-and-white in syndication and paperback reprints.

After WWII, Harry Devlin became the top editorial cartoonist at Collier's, one of the few publications then displaying editorial cartoons in full color. During the 1940s, Gurney Williams was the cartoon editor for Collier's, American Magazine and Woman's Home Companion, paying $40 to $150 for each cartoon. From a staggering stack of some 2000 submissions each week, Williams made a weekly selection of 30 to 50 cartoons, lamenting:

The other day I found myself staring at the millionth cartoon submitted to me since I became humor editor here. I wish it could have been fresh and original. Instead, it showed several ostriches with their heads buried in the sand. Two others stood nearby. Said one to the other: "Where is everybody?"[16]

Joseph Barbera, before he found fame in animation, had several cartoons published in Collier's in the late 1920s and early 1930s.

During World War II with William L. Chenery as editor (1941),[17] Collier's readership reached 2.5 million. In the October 14, 1944 issue, the magazine published one of the first articles about concentration camps. It was Jan Karski's "Polish Death Camp," a harrowing account of his visit to Belzec. The now problematic title is explored in "Polish death camp controversy" (under heading "use and reactions"). Karski's book Story of a Secret State (which contained the Collier's excerpt), was published later that year by Houghton Mifflin. It became a Book of the Month Club selection, and bestseller with 400,000 copies sold in 1944-45. The Collier's selection was reprinted in Robert H. Abzug's America Views the Holocaust: 1933-1945 (Palgrave, 1999).

Collier's had a circulation of 2,846,052 when Walter Davenport took over as editor in 1946, but the magazine began to lose readers during the post-World War II years. Collier's published a regular men's fashion feature contributed by Esquire co-founder Henry L. Jackson[18] and also published long-awaited images from the 200-inch (5.08 m) Hale telescope's first light in 1949.[19] In the early 1950s, Collier's ran a groundbreaking series of science-based articles speculating on space flight, Man Will Conquer Space Soon!, which prompted the general public to seriously consider the possibility of a trip to the moon, with the percentage of Americans who believed a manned lunar trip could happen within 50 years changing from 15% to 38% by 1955.[20]

In 1951, an entire issue described the events and outcome of a hypothetical war between the United States and the Soviet Union, entitled Preview of the War We Do Not Want. Collier's changed from a weekly to a biweekly in August 1953, but it continued to lose money. In 1954, John O'Hara became a columnist with his "Appointment with O'Hara" column.

The magazine ceased publication with the issue for the week ending January 4, 1957.[21]

Collier's fiction editor Knox Burger chose 19 stories for Collier's Best (Harper & Bros., 1951), and he also selected Best Stories from Collier's (William Kimber, 1952).[22] A huge history and collection appeared with the publication of the 558-page A Cavalcade of Collier's, edited by Kenneth McArdle (Barnes, 1959).

Cornelius Ryan's 1957 book One Minute to Ditch!, about the successful ocean ditching of a Pan American Boeing 377 Stratocruiser, was an expansion of his Collier's article in the December 21, 1956. Ryan was an associate editor of the magazine during the mid-1950s, and the novelist Lonnie Coleman was an editorial associate during that same period.

Hollywood's KFWB had been the top AM radio station in Southern California during the late 1950s and early 60's, but it was late catching up to current music trends such as the British Invasion and lost market share to other stations such as KRLA-Pasadena and the Bill Drake-programmed "BOSS Radio" 93/ KHJ-Los Angeles which switched formats to rock and roll in 1965. KFWB was sold to Westinghouse in 1966 for what was then a record price for a radio station: $10 million. By March 1968 it gave up music altogether and switched to an all-news format.