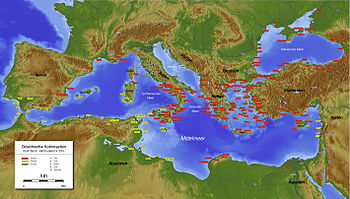 The Mediterranean in ca. the 6th century BC. Phoenician cities are labelled in yellow, Greek cities in red, and other cities in grey.

Colonies in antiquity were city-states founded from a mother-city (its "metropolis"),[1] not from a territory-at-large. Bonds between a colony and its metropolis remained often close, and took specific forms.[2] However, unlike in the period of European colonialism during the early and late modern era, ancient colonies were usually sovereign and self-governing from their inception.

An Egyptian colony that was stationed in southern Canaan dates to slightly before the First Dynasty.[3] Narmer had Egyptian pottery produced in Canaan and exported back to Egypt,[4] from regions such as Arad, En Besor, Rafiah, and Tel ʿErani.[4] Shipbuilding was known to the ancient Egyptians as early as 3000 BC, and perhaps earlier. The Archaeological Institute of America reports[5] that the earliest dated ship—75 feet long, dating to 3000 BC[6] – may have possibly belonged to Pharaoh Aha.[6]

The Phoenicians were the major trading power in the Mediterranean in the early part of the first millennium BC. They had trading contacts in Egypt and Greece, and established colonies as far west as modern Spain, at Gadir (modern Cádiz).

From Gadir the Phoenicians controlled access to the Atlantic Ocean and the trade routes to Britain. The most famous and successful of Phoenician colonies was founded by settlers from Tyre in 814–813 BC and called Kart-Hadasht (Qart-ḥadašt,[7] literally "New Town",[8] known to history as Carthage. The Carthaginians later founded their own colony in the southeast of Spain, Carthago Nova, which was eventually conquered by their enemy, Rome.

According to María Eugenia Aubet, Professor of Archaeology at the Universidad Pompeu Fabra, Barcelona: "The earliest presence of Phoenician material in the West is documented within the precinct of the ancient city of Huelva, Spain...The high proportion of Phoenician pottery among the new material found in 1997 in the Plaza de las Monjas in Huelva argues in favor of a regular presence of Phoenician people from the start of the 9th century BC. The recent radiocarbon dates from the earliest levels in Carthage situate the founding of this Tyrian colony in the years 835–800 cal BC, which coincides with the dates handed down by Flavius Josephus and Timeus for the founding of the city." [9] 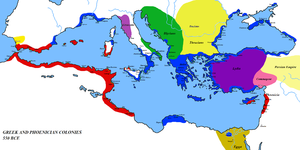 In Ancient Greece, colonies were sometimes founded by vanquished people, who left their homes to escape subjection at the hand of a foreign enemy; sometimes as a sequel to civil disorders, when the losers in internecine battles left to form a new city elsewhere; sometimes to get rid of surplus population, and thereby to avoid internal convulsions; and sometimes as a result of ostracism. But in most cases the motivation was to establish and facilitate relations of trade with foreign countries and further the wealth of the mother-city (in Greek metropolis). Colonies were established in Ionia and Thrace as early as the 8th century BC.[10]

More than thirty Greek city-states had multiple colonies around the Mediterranean world, with the most active being Miletus, with ninety colonies stretching throughout the Mediterranean Sea, from the shores of the Black Sea and Anatolia (modern Turkey) in the east, to the southern coast of the Iberian Peninsula in the west, as well as several colonies on the Libya coast of northern Africa,[11] from the late 9th to the 5th centuries BC.

There were two similar types of colony, one known as an ἀποικία - apoikia (pl.: ἀποικίαι, apoikiai) and the other as an ἐμπορίov - emporion (pl.: ἐμπορία, emporia). The first type of colony was a city-state on its own; the second was a Greek trading-colony.

The Greek city-states began establishing colonies around 900[12] - 800 BC, at first at Al Mina on the coast of Syria and the Greek emporium Pithekoussai at Ischia in the Bay of Naples, both established about 800 BC by Euboeans.[13]

Two flushes of new colonists set out from Greece at the transition between the "Dark Ages" and the start of the Archaic Period, one in the early 8th century BC and a second burst of the colonizing spirit in the 6th century. Population growth and cramped spaces at home seem an insufficient explanation, while the economical and political dynamics produced by the competitive spirit between the frequently kingless, newly introduced concept of the Greek city-states, striving to expand their sphere of economical influence better fits as their true incentive. Through this Greek expansion the use of coins flourished throughout the Mediterranean Basin. 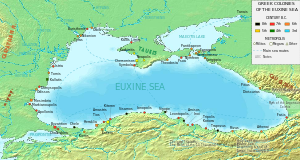 Ancient Greek colonies of the Black Sea, 8th-3rd century BC

Influential Greek colonies in the western Mediterranean – many of them in today's Italy — included Cyme, Rhegium (Rhegion) by Chalcis and Zankle (c. 8th century), Syracuse by Corinth/Tenea (c. 734 BC), Naxos by Chalcis (c. 734 BC), Massalia (the later Marseille, France, c. 598 BC) and Agathe (shortly after Massalia) by Phokaia, Elea (Italy) and Emporion (nowadays Spain) by Phokaia/Massalia (c. 540 BC and early 6th century), Antipolis (nowadays France) by Achaea, Alalia (Corsica) by Phokaia/Massalia (c. 545 BC) and Cyrene (Cyrenaica, nowadays Libya) by Thera (762/61 and 632/31 BC).[14]

The Greeks also colonised modern-day Crimea on the Black Sea. Among the settlements they established there was the city of Chersonesos, at the site of modern-day Sevastopol.[15]

The extensive Greek colonization is remarked upon by Cicero when noting that "It were as though a Greek fringe has been woven about the shores of the barbarians."[16]

Several formulae were generally adhered to on the solemn and sacred occasions when a new colony set forth. If a Greek city was sending out a colony, an oracle, especially one such as the Oracle of Delphi, was almost invariably consulted beforehand. Sometimes certain classes of citizens were called upon to take part in the enterprises; sometimes one son was chosen by lot from every house where there were several sons; and strangers expressing a desire to join were admitted. A person of distinction was selected to guide the emigrants and make the necessary arrangements. It was usual to honor these founders of colonies, after their death, as heroes. Some of the sacred fire was taken from the public hearth in the Prytaneum, from which the fire on the public hearth of the new city was kindled. And, just as each individual had his private shrines, so the new community maintained the worship of its chief domestic deities, the colony sending embassies and votive gifts to the mother-city's principal festivals for centuries afterwards.

Relations of colony and metropolis

The relation between colony and mother-city, known literally as the metropolis, was viewed as one of mutual affection. Any differences that arose were resolved by peaceful means whenever possible, war being deemed excusable only in cases of extreme necessity. It is worth noting that the Peloponnesian War was in part a result of a dispute between Corinth and her colony of Corcyra (Corfu). The charter of foundation contained general provisions for the arrangement of the affairs of the colony, and also some special enactments. The constitution of the mother-city was usually adopted by the colony, but the new city remained politically independent. The "holy fire" of the metropolis was preserved in a special place to remind the common ties. If the colony sent out a fresh colony on its own account, the mother-city was generally consulted, or was at least requested to furnish a leader. Frequently the colonies declaring their commitment to the various metropolitic alliances formed in the Greek mainland and for religious reasons would pay tribute in religious centres, like Delphi, Olympia or Delos.[17]

The cleruchs (κληροῦχοι, klêrouchoi) formed a special class of Greek colonists, each being assigned an individual plot of land (κλῆρος, klêros) in the place to which they had been assigned. The trade factories set up in foreign countries, such as Egypt, were somewhat different from the ordinary colonies, the members retaining the right of domicile in their own fatherland and confining themselves to their own quarter in the foreign city. 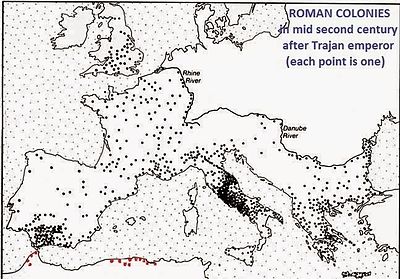 It was an old custom in ancient Italy to send out colonies for the purpose of securing new conquests. The Romans, having no standing army, used to plant bodies of their own citizens in conquered towns as a kind of garrison. These bodies would consist partly of Roman citizens, usually to the number of three hundred; partly of members of the Latin League, in larger numbers. The third part of the conquered territory was handed over to the settlers. The coloniae civium Romanorum (colonies of Roman citizens) were specially intended to secure the two seacoasts of Italy, and were hence called coloniae maritimae. The coloniae Latinae, of which there was a far greater number, served the same purpose for the mainland.

The duty of leading the colonists and founding the settlement was entrusted to a commission usually consisting of three members. These men continued to stand in the relation of patrons (patroni) to the colony after its foundation. The colonists entered the conquered city in military array, preceded by banners, and the foundation was celebrated with special solemnities. The coloniae were free from taxes, and had their own constitution, a copy of the Roman, electing from their own body their Senate and other officers of State. To this constitution the original inhabitants had to submit. The coloniae civium Romanorum retained Roman citizenship, and were free from military service, their position as outposts being regarded as an equivalent. The members of the coloniae Latinae served among the socii, the allies, and possessed the so-called ius Latinum or Latinitas. This secured to them the right of acquiring property, the concept of commercium, and the right of settlement in Rome, and under certain conditions the power of becoming Roman citizens; though in course of time these rights underwent many limitations.

From the time of the Gracchi the colonies lost their military character. Colonization came to be regarded as a means of providing for the poorest class of the Roman Plebs. After the time of Sulla it was adopted as a way of granting land to veteran soldiers. The right of founding colonies was taken away from the people by Julius Caesar, and passed into the hands of the Roman emperors, who used it mainly in the provinces for the exclusive purpose of establishing military settlements, partly with the old idea of securing conquered territory. It was only in exceptional cases that the provincial colonies enjoyed the immunity from taxation which was granted to those in Italy.

Most of this text is taken from Harry Thurston Peck's Harpers Dictionary of Classical Antiquities (1898) and needs to be rewritten and expanded.