Colour sergeant or color sergeant (CSgt or C/Sgt) is a rank of non-commissioned officer found in several militaries. 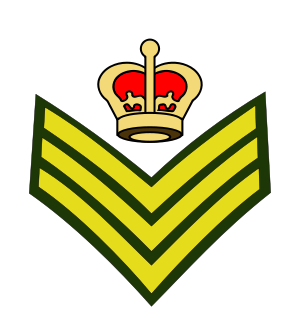 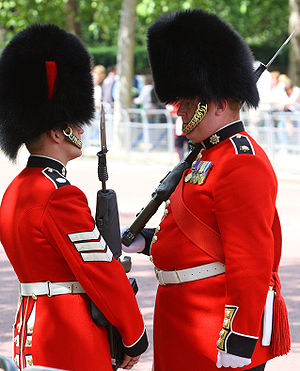 A colour sergeant of the Coldstream Guards (right) speaking to a lance sergeant (left).

Colour sergeant (CSgt or formerly C/Sgt) is a non-commissioned title in the Royal Marines and infantry regiments of the British Army, ranking above sergeant and below warrant officer class 2. It has a NATO ranking code of OR-7 and is equivalent to the rank of staff sergeant in other branches of the Army, flight sergeant or chief technician in the Royal Air Force, and chief petty officer in the Royal Navy. The insignia is the monarch's crown above three downward pointing chevrons.

The rank was introduced into the British Army during the Napoleonic Wars to reward long-serving sergeants. By World War I all colour sergeants held the appointments of company sergeant major (who were promoted to the new rank of warrant officer class II from February 1915) or company quartermaster sergeant and the rank itself was never used. It appears to have been reintroduced in the 1920s.

Historically, colour sergeants of British line regiments protected ensigns, the most junior officers who were responsible for carrying their battalions' colours to rally troops in battles. For this reason, to reach the rank of colour sergeant was considered a prestigious attainment, granted normally to those sergeants who had displayed courage on the field of battle. This tradition continues today as colour sergeants form part of a colour party in military parades.

During ceremonial events it is from the colour sergeant that the ensign collects the colour of the battalion or regiment.[citation needed]

Colour sergeant is also a rank in the foot guards regiments of the Canadian Forces, specifically the Governor General's Foot Guards and the Canadian Grenadier Guards. It is the equivalent to warrant officer; a colour sergeant wears the rank insignia of a warrant officer (a royal crown) on all uniforms except No. 1 Ceremonial Dress, on which a special rank badge is worn: three chevrons, point down, surmounted by an image of regimental colours.

Canadian colour sergeants are addressed in the same manner as their British counterparts.

Colour (color) sergeant is an NCO rank that was used at different times in the U.S. military. The rank was last used in the U.S. Army during World War I and is still conferred on second class cadets of the United States Military Academy at West Point who are assigned to a colour party (one bearer per colour plus two guards). It is also a term used in the United States Marine Corps for sergeants who carry the colours.