From Infogalactic: the planetary knowledge core
Jump to: navigation, search
For other uses, see Colt.

The term "colt" only describes young male horses and is not to be confused with foal, which is a horse of either sex less than one year of age. Similarly, a yearling is a horse of either sex between the ages of one and two. A young female horse is called a filly, and a mare once she is an adult animal. In horse racing, particularly for Thoroughbreds in the United Kingdom, a colt is defined as an uncastrated male from the age of two up to and including the age of four.[3] 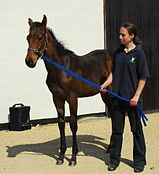 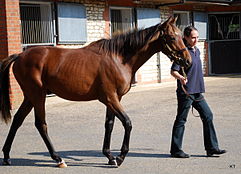 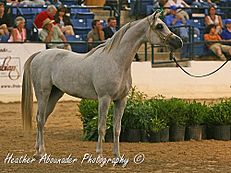 An adult male horse if left intact is called either a "stallion" or a "horse" (sometimes full horse); if castrated, it is called a gelding. In some cases, particularly informal nomenclature, a gelding under four years is still called a colt. A rig or ridgling is a male equine with a retained testicle or one which has been incompletely castrated.[4]

In the wild, colts are driven from their herds by the herd stallion somewhere between the age of one and two. This may be in part an instinct to prevent inbreeding. When driven out, they usually join with other young stallions in a bachelor herd. They stay with this band until they are mature enough to form their own herd of mares. The terms "rag" or "rake" have been historically used to refer to a group of colts, but they have fallen out of modern usage.[5][6]