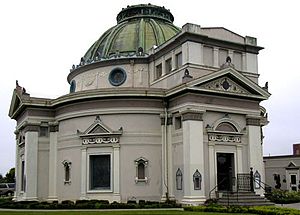 A columbarium is a place for the respectful and usually public storage of cinerary urns (i.e., urns holding a deceased’s cremated remains). The term comes from the Latin columba (dove) and originally referred to compartmentalized housing for doves and pigeons called a dovecote.

Today's columbaria can be either free standing units, or part of a mausoleum or another building. Some manufacturers produce columbaria that are built entirely off-site and brought to the cemetery by a large truck. Many modern crematoria have columbaria. Fine examples of these are the columbaria in Père Lachaise Cemetery in Paris and Golders Green Crematorium in London.

In other cases, columbaria are built into church structures. One example is the Cathedral of Our Lady of the Angels (Los Angeles, California), which houses a number of columbarium niches in the mausoleum built into the lower levels of the Cathedral. The construction of columbaria within churches is particularly widespread in the Czechoslovak Hussite Church. An example can be seen at the Church of St Nicolas in Old Town Square (Prague). In the Roman Catholic Church, although traditional burial is still preferred, cremation is permitted provided that the cremated remains are buried or entombed. As a result, columbaria can be found within some Catholic cemeteries.

Columbaria are often closely similar in form to traditional Buddhist temples, which from ancient times have housed cremated ashes. In Buddhism, ashes of the deceased may be placed in a columbarium (in Chinese, a naguta ("bone-receiving pagoda"); in Japanese, a nokotsudo ("bone-receiving hall")), which can be either attached to or a part of a Buddhist temple or cemetery. This practice allows for the family of the deceased to visit the temple for the conduct of traditional memorials and ancestor rites.

In the Bet Guvrin area several series of large caves dug into soft rock were found. There were several theories about their original use, for ritual burial, for growing pigeons to be used for ritual sacrifice, or for raising pigeons for fertilizer production. One such cave had been covered by an earthquake close to the time of its original usage, and had no signs of secondary usage. This cave had no ashes found in it, but also no pigeon droppings.[3]