From Infogalactic: the planetary knowledge core
Jump to: navigation, search
Not to be confused with Columbia, Lancaster County, Pennsylvania.

Columbia County is a county located in the U.S. state of Pennsylvania. As of the 2010 census, the population was 67,295.[2] Its county seat is Bloomsburg.[3] The county was created on March 22, 1813, from part of Northumberland County and named for Columbia, a poetic name for the United States that alludes to Christopher Columbus. 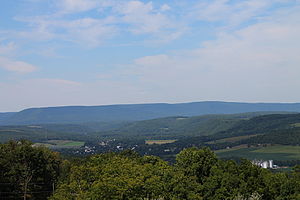 View of northern Columbia County, Pennsylvania from Kramer Hill Road in Fishing Creek Township. On the horizon (about 8-10 miles away) is North Mountain. The borough of Benton is in the center of the picture.

Part of Ricketts Glen State Park is in the northern portion of Columbia County.[8]

While the county registration tends to be evenly matched between Democrats and Republicans, the county trends Republican in statewide elections. While John McCain received 51.6% of its vote to 47.1% for Barack Obama, this was a far-closer margin than the 20 points that George W. Bush carried it by in 2004. Each of the three row-office statewide winners carried Columbia in 2008. In 2006, Democrat Bob Casey Jr. received 51% of its vote when he unseated incumbent Republican US Senator Rick Santorum and Ed Rendell received 50.6% of the vote against Lynn Swann.

For many years Columbia County was represented in the State House by a conservative Democrat in the 109th district until John Gordner changed parties to Republican in 2001. He was elected to the State Senate in 2003 and succeeded by Republican David R. Millard. Columbia is in the 27th Senate district and 11th Congressional district. 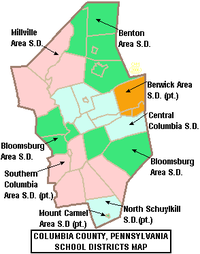 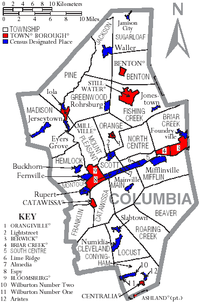 Under Pennsylvania law, there are four types of incorporated municipalities: cities, boroughs, townships, and, in at most two cases, towns. The following town, boroughs and townships are located in Columbia County: