From Infogalactic: the planetary knowledge core
Jump to: navigation, search
Not to be confused with Columbus, North Carolina.

On of the most significant geographic features is the Green Swamp, a 15,907 acre area along highway 211 in the north eastern portion of the county. It contains several unique and endangered species, such as the venus flytrap. The area contains the Brown Marsh Swamp, and is a remnant of the giant longleaf pine forest that once stretched across the Southeast from Virginia to Texas. [4]

The county was formed in 1808 from parts of Bladen County and Brunswick County. It was named for Christopher Columbus.[5]

The Waccamaw Siouan Indians are one of several autonomous tribes, known colloquially as "eastern Siouans", whose territories extended through Columbus County prior to European settlement in the 16th Century. During the Tuscarora War and Yamasee War, tribal numbers were greatly reduced and resulted in the people's retreat to the swamps near Lake Waccamaw.[6] Throughout the 17th Century, Waccamaw Siouans are notably absent from the historical record, only appearing towards the end of the century when the U.S. Census recorded common Waccamaw surnames among peoples of small isolated communities.[7]

In 1910, the earliest known governmental body of the Waccamaw Indians was officially created—the Council of Wide Awake Indians. The council's primary objectives were to obtain public funding for Indian schools, and to eventually obtain federal recognition. The council was successful in opening its first publicly funded school in 1933 and others soon followed; however, lack of funding from taxpayers helped to significantly fuel the council's campaign for federal recognition in 1940.[7]

The name Waccamaw Siouan was first officially used by the United States government in 1949, when a bill intended to grant the tribe federal recognition was introduced before Congress.[7] While the bill was defeated in committee the following year, changes in federal policy during the 1960s and 1970s regarding public funding and economic assistance led to the Waccamaw benefiting from government programs without federal recognition.[7]

Though the Waccamaw Siouan are not federally recognized, they have been recognized by the North Carolina Commission of Indian Affairs since 1971. Tribal leadership is provided and maintained by the Waccamaw Siouan Sevelopment Association (WSDA), a nonprofit group founded in 1972. The group is headed by a nine-member board of directors, elected by a secret ballot that is open to all tribal members over the age of 18; in addition, the board includes a chief, whose role is largely symbolic.[7]

The economy of Columbus County centers on two different industries: agriculture and manufacturing. Columbus farmers produce crops such as pecans and peanuts along with soybeans, potatoes, and corn. Cattle, poultry, and catfish are other agricultural products in Columbus County. Factories in the region focus on textiles, tools, and plywood. Household products such as doors, furniture, and windows are other manufactured goods produced in Columbus.[15]

Carolina Southern stopped railroad service to the county in 2012, and efforts to restore service have proven difficult.[16] However, as of July 2014, positive developments were reported to return railroad service to the area, a move considered necessary for spurring economic development in the area.[17] Carolina Southern agreed, in July 2014, to begin the process allowing the counties of Horry County, South Carolina, Marion, South Carolina and Columbus County, NC to assume control of the area rail lines with the hopes repairing the railroad tracks and bridges and then finding a buyer to re-establish service to the area.[18] A public hearing on the matter was held on October 6, 2014.[19] During the October 6th meeting, the Columbus County Commissioners voted to support the initiative to restart rail service with a 10-year grant for the program. Some of the commissioners may not have revealed that they will benefit from the re-establishment of rail service.[20] The Horry County Council, in a vote on October 7, 2014 also voted to provide funding to reestablish railroad service to the area.[21] Although originally it was thought service could be restored as early as spring 2015,[22] however, the sale of the railroad was not completed until August, 2015 to R.J. Coleman Railroad..[23] A new target date of February 2016 was announced, as millions of dollars are expected to be spent repairing the rail lines that have been idle since 2011.[24]

Columbus County is a member of the regional Cape Fear Council of Governments. The county is governed by a board of seven Commissioners.

Columbus County maintains an animal shelter at 288 Legion Drive in Whiteville, NC. It has been a target both from government regulators as well as activist [25] with problems present for "years and years and years" [26] In the past, the shelter has been fined [27] as well as receiving warning from state regulators for various issues. [28]

In September 2015, a new manager was hired to combat these issues, [29] and he announced an ambitious plan to improve the shelter. In late October 2015, WECT ran a story showing that things at the shelter were indeed improving, highlighting a large donation from Austria that was made possible by coordination on Facebook. The story also enumerated more changes that the new director has made to improve conditions. [30] As of November 2015, the shelter maintains a Facebook page showing the animals available for adoption. [31] 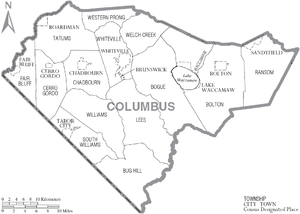