Colwinston (Welsh: Tregolwyn) is a village in the Vale of Glamorgan, Wales. By road the village is located 3.9 miles southeast of the centre of Bridgend and 20.5 miles west of the centre of Cardiff.[1] The population of the village in 2005 was approximately 400. The community covers an area of 746 hectares (2.88 sq mi).[2] The novelist Agatha Christie was a frequent visitor to the village, where her descendants still live, at the former manor house of Pwllywrach.

The historical strength of the village relates to its location within half a mile of the A48 which was the Roman Via Julia Strata Maritima[citation needed]. Earlier and later tribal settlement established the importance of a 66-acre area of common land known as the "Golden Mile Common". No one knows where the name originated[citation needed] although it is widely believed that this was where the armies gathered to march to war and on their return men would line up to receive their gold sovereign before disbanding to return home.

The Glamorgan Yeomanry and the Welsh archers/bowmen are well documented in the battles of Agincourt and Crecy and this is also believed to have been the gathering point of the South Wales contingent[citation needed].

The Norman St Michael's Church in Colwinston is reputed to have originally been built in 1111.[3] The church was restored in 1879 and suffered a fire in 1971.[3] The 1811 A Topographical Dictionary of The Dominion of Wales by Nicholas Carlisle said of the village:

"COLWINSTON, or, TRE COLLWYN, in the Cwmwd of Maenor Glynn Ogwr, Cantref of Cron Nedd (now called the Hundred of Ogmore),County of GLAMORGAN, South Wales: a discharged Vicarage, valued in the King's Books at £6..6..8; Patron, David Thomas, Esq.: Church dedicated to St. Michael. The Resident Population of this Parish, in 1801, was 235. The Money raised by the Parish Rates, in1803, was £101..6..10, at 1s. 6d. per acre. It is 4 m. W. N. W. from Cowbridge. This Parish contains between fourteen and fifteen hundred acres of inclosed Land, and 60 acres of common Pasture, called The Golden Mile. According to the Diocesan Report, in 1809, the yearly value of this Benefice, arising from Vicarial Tythes, and Augmentation, was £111..18..0. "[4]

In 1835, the Seion Presbyterian Chapel was built but it closed in 1996; it later became a residential building.[3] In 1843, the Ebenezer Baptist Chapel was established and the building was completed in 1852.[3] The last minister was the Rev A.E. Powell of Balarat, who served at the church between 1905 and 1944 before the church became part of a house.[3]

Colwinston is one of only three villages in Wales which suffered no fatalities in World War I and one of only 52 Thankful Villages in the UK. However, the village lost four men in World War II, one of whom was Agatha Christie's son-in-law, Colonel Hubert Prichard.[5] 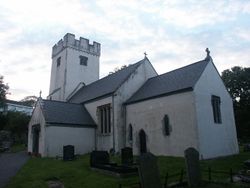 Colwinston is known for the medieval parish church of St. Michael and All Angels, celebrated its 900-year anniversary in 2011. The church is a Grade 1 listed building. Close by are St David's Church in Wales Primary School, the village hall, the village green and the Sycamore Tree Inn, run by Brains Brewery. The inn dates to 1650 or earlier, and in May 1865 The Philanthropic Order of True Ivorites Friendly Society was established and registered there.[3] At the crossroads is a thatched house dated to the 16th century, opposite the south-east corner of churchyard. It has a Gothic or Tudor arch and the building is "one of only two in Glamorgan with a latrine in the form of a small closet at the side of the fireplace."[3] Several other cottages in the village are listed buildings.

Colwinston has its own community council with seven elected members.[8] The major social event of the year is the annual village festival, usually held during the first or second week in July. Other annual events include a pantomime and the New Year's Day sport of "collyball".

A multi-use games area (MUGA) was constructed close to the village hall in 2013.[9]