For more than 150 years, mounted Comanche warriors were “the Lords of the Southern Plains,” The Comanche lived in a large area known as Comancheria, and they raided over an area that stretched from southern Colorado and Kansas to northern Mexico. They shared Comancheria with the Wichita, Kiowa, and Kiowa Apache and, after 1840, the southern Cheyenne and Arapaho.[1]

Comanche power peaked in the 1840s when they conducted large scale raids hundreds of miles deep into Mexico while also warring against the Anglo-Americans and Hispanics in Texas. Their decline resulted from epidemics of cholera, smallpox and encroachment due to the expanding population of the United States.

The Comanche Wars began in 1706 with raids by Comanche on Spanish colonies in New Mexico and continued until the last bands of Comanche surrendered to the United States in 1875 although a few Comanche warriors continued to fight in conflicts such as the Buffalo Hunters' War in 1876 and 1877.

Iron Jacket was a Comanche Chief and Medicine man. The name “Iron Jacket” came from his tendency to wear a coat of mail into battle. Iron Jacket took part in Antelope Hills Expedition where he was ultimately killed in the battle of Little Robe Creek. Iron Jacket was the father of Peta Nocona who later became a chief himself. 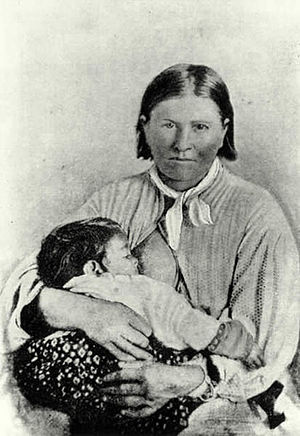 Peta Nocona was the father of the last Comanche Chief Quanah Parker, as well as a Comanche Chief who played a crucial part in the Indian Wars. Peta Nocona lead the attack on Fort Parker where Cynthia Ann Parker was kidnapped and eventually became his wife. Peta Nocona's place and date of death is still in dispute. 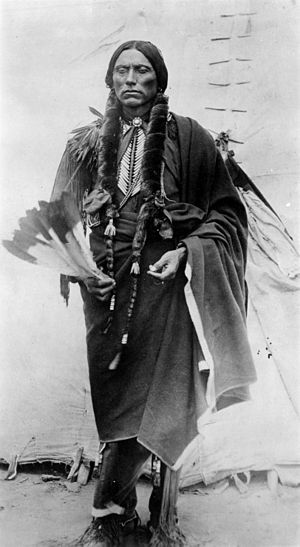 Quanah Parker was the last Comanche Chief and part of the Quahadi sect of the Comanche, who were highly respected by the other tribes. Quanah was never an official chief since the United States government appointed him to the position. Before he was a Comanche chief, Quanah Parker witnessed the peace negotiations of 1867 but refused to sign the accords.

Buffalo Hump was a Comanche War Chief who led the Great Raid of 1840 after Texan officials killed Comanche delegates during the events that unfolded during the Council House Fight.

Mirabeau Lamar was the second President of the Republic of Texas from 1838 to 1841, preceded by Sam Houston. Mirabeau Lamar had a harsher policy towards Native Americans in Texas and signed two bills which escalated tensions in the region. The first bill was signed on December 21, 1838 which formed an 840-man regiment to protect the Northern and Western Frontiers of Texas. An additional bill was passed on December 29, 1838, which added an additional 8 companies of mounted volunteers to serve 6 month deployments.[3]

Santa Anna was a Comanche war chief who advocated for armed resistance against the Texas settlers, and became influential after the Council House Fight of 1840 in San Antonio. Santa Anna joined forces with Buffalo Hump and most likely took part in the Battle of Plum Creek and the Great Raid of 1840. Santa Anna was the first of his tribe to travel to Washington D.C. and agreed to sign a treaty in May 1846, despite the continued hostilities. Santa Anna died from a cholera outbreak in 1849.[4]

Battles And Campaigns in the United States

The Fort Parker Massacre was a raid conducted by a correlation of tribes including the Comanches, Kiowas, Caddos and Wichitas. They attacked the fort killing five of the inhabitants and capturing Cynthia Ann Parker a nine-year old who later married the Comanche chief Peta Nocona, John Richard Parker the brother of Cynthia Ann Parker,[5] Rachel Plummer a seventeen-year-old wife along with her son James Pratt Plummer, and lastly Elizabeth Duty Kellog who was later reunited with her sister Martha in 1836.

The Council House Fight was a Peace delegation turned conflict between the Comanche delegates and the Texas officials on March 19, 1840. The conflict started over negotiations regarding Texan and Mexican captives that the Comanches were holding in order to gain back sections of Comancheria that Texas had claimed. The Council house fight ended with twelve of the Comanche Leaders killed inside the Council house as well as 23 others shot in San Antonio.[6]

The Battle of Plum Creek was a conflict in Lockhart, Texas that took place on August 12, 1840. It was an attack led by Chief Buffalo Hump who led a large force of 1,000 Comanche warriors against 200 Texas Rangers in response to the Council House Fight. The Battle Began as a raid where the Comanche party stole livestock and firearms which gradually turned into a gun fight. The results of the battle are still being debated since the Rangers reported 80 Comanches were killed but only 12 bodies were found [7] The Comanches claimed to have killed 11 Texas Rangers.

The Antelope Hills Expedition was a campaign led by the federal 2nd Cavalry against the Comanche and Kiowa tribes in Comancheria. It started in January 1858 and ended in May of the same year. The cause for the expedition was due to Comanche raids into Texan territories. Peta Nocona and Iron Jacket led Comanche troops against the combined 220 forced of 2nd cavalry, Tonkawa, Nadaco and Shawnee. Their expedition's purpose was to move the 2nd Cavalry from Oklahoma to Texas in order to better handle the raiding Comanches. For this reason the United States gained the aid of the Comanches' enemy tribes Tonkawa, Nadaco and Shawnee. The resulting battle concluded with 50 killed on the United States side and 76 killed and 16 captured on the Comanche side. The Antelope Hills Expedition further expanded into the Battle of Little Robe Creek.

The Battle of Pease River took place on December 18, 1860, in Foard County, Texas. This battle has become highly debated due to unreliable sources and exaggerated facts surrounding the event, but the event started in November 1860, most likely when a band of Comanche warriors, "struck farms, ranches, and outlying settlements in Parker, Young, Jack, and Palo Pinto counties west of Fort Worth."[10] In these Comanche raids property was stolen and at least six people were killed. The citizens responded by pursuing the Comanches to a village on the Pease River, but because there were too many Comanches, the citizens had to wait for a larger force to arrive. Three units arrived, led by Lawrence Sullivan "Sul" Ross, Captain J.J. Cureton, and First Sergeant John W. Spangler. On December 19, 1860, Sul Ross led the attack on the Comanche village and according to Ross's report, "killed twelve of the Comanches and captured three: a woman who turned out to be Cynthia Ann Parker, her daughter Topsannah (Prairie Flower), and a young boy whom Ross brought to Waco and named Pease Ross...The whole incident lasted twenty minutes-thirty at the most."[11]

The First Battle of Adobe Walls was a battle fought against the United States Army and the Comanche Allies of Kiowa, and the Plains Apaches. The battle began when Kit Carson attacked a Kiowa town [12] In response the Kiowa and Comanches launched a counterattack of over 1,000 men. The battle was long and drawn out almost to the point of the United States army running out of ammunition.