From Infogalactic: the planetary knowledge core
(Redirected from Comb Ceramic culture)
Jump to: navigation, search
For the contemporary (c. 3200-2300 BC) Scandinavian culture with a similar name, see Pitted-Ware culture. 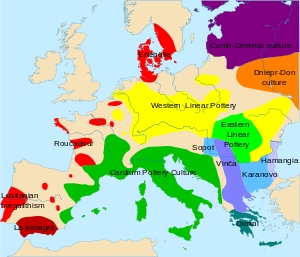 The Pit–Comb Ware culture AKA Comb Ceramic culture was a northeast European culture of Pit–Comb Ware-making hunter-gatherers. It existed from around 4200 BC to around 2000 BC. The name is derived from the most common type of decoration on its ceramics, which looks like the imprints of a comb.

The distribution of the artifacts found includes Finnmark (Norway) in the north, the Kalix River (Sweden) and the Gulf of Bothnia (Finland) in the west and the Vistula River (Poland) in the south. In the east the Comb Ceramic pottery of northern Eurasia extends beyond the Ural mountains to the Baraba steppe adjacent to the Altai-Sayan mountain range, merging with a continuum of similar ceramic styles.[1] It would include the Narva culture of Estonia and the Sperrings culture in Finland, among others. They are thought to have been essentially hunter-gatherers, though e.g. the Narva culture in Estonia shows some evidence of agriculture. Some of this region was absorbed by the later Corded Ware horizon. 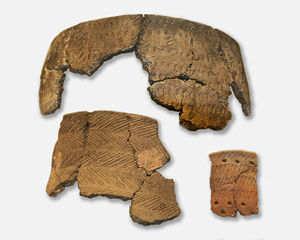 The Pit–Comb Ware culture is one of the few exceptions to the rule that pottery and farming coexist in Europe. In the Near East farming appeared before pottery, then when farming spread into Europe from the Near East, pottery-making came with it. However, in Asia, where the oldest pottery has been found, pottery was made long before farming. It appears that the Comb Ceramic Culture reflects influences from Siberia and distant China.[2]

The ceramics consist of large pots that are rounded or pointed below, with a capacity from 40 to 60 litres. The forms of the vessels remained unchanged but the decoration varied.

Among the many styles of comb ware there is one which makes use of the characteristics of asbestos: Asbestos ware. Other styles are Pyheensilta, Jäkärlä, Kierikki, Pöljä and Säräisniemi pottery with their respective subdivisions. Sperrings ceramics is the original name given for the younger early Comb ware (Ka I:2) found in Finland. 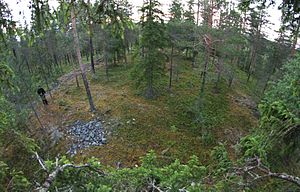 A so-called Giant's Church at Rajakangas, Oulu, Finland. The purpose of these large, rectangular stone structures is unclear.[3]

The settlements were located at sea shores or beside lakes and the economy was based on hunting, fishing and the gathering of plants. In Finland, it was a maritime culture which became more and more specialized in hunting seals. The dominant dwelling was probably a teepee of about 30 square meters where some 15 people could live. Also rectangular houses made of timber become popular in Finland from 4000 BC cal. Graves were dug at the settlements and the dead were covered with red ochre. The typical Comb Ceramic age shows an extensive use of objects made of flint and amber as grave offerings.

The stone tools changed very little over time. They were made of local materials such as slate and quartz. Finds suggest a fairly extensive exchange network: red slate originating from northern Scandinavia, asbestos from Lake Saimaa, green slate from Lake Onega, amber from the southern shores of the Baltic Sea and flint from the Valdai area in northwestern Russia.

The culture was characterised by small figurines of burnt clay and animal heads made of stone. The animal heads usually depict moose and bears and were derived from the art of the Mesolithic. There were also many rock paintings.

Previously, the dominant view was that the spread of the Comb Ware people was correlated with the diffusion of the Uralic languages, and thus an early Uralic language must have been spoken throughout this culture. However, another more recent view is that the Comb Ware people may have spoken a Paleo-European (pre-Uralic) language, as some toponyms and hydronyms also indicate a non-Uralic, non-Indo-European language at work in some areas.[4] Even then, linguists and archaeologists both have also been skeptical of assigning languages based on the borders of cultural complexes, and it's possible that the Pit-Comb Ware Culture was made up of several languages, one of them being Proto-Uralic.[citation needed]