From Infogalactic: the planetary knowledge core
Jump to: navigation, search
File:Medics-p013020.jpg
Medical team at work during the Battle of Normandy.
File:Norwegian medics.JPG
Norwegian medics during an exercise 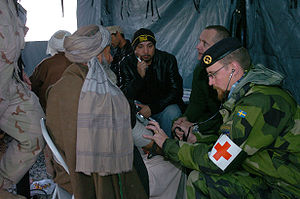 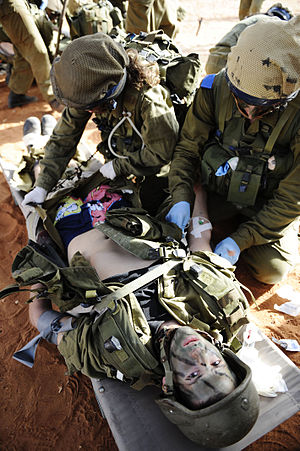 Combat medics (also known as medics) are military personnel who have been trained to at least an EMT-Basic level (16 week course in the U.S. Army),[1] and are responsible for providing first aid and frontline trauma care on the battlefield. They are also responsible for providing continuing medical care in the absence of a readily available physician, including care for disease and battle injuries. Combat medics are normally co-located with the combat troops they serve in order to easily move with the troops and monitor ongoing health.

In 1864, sixteen European states adopted the first-ever Geneva Convention to save lives to alleviate the suffering of wounded and sick combatants, and to protect trained medical personnel as non-combatants, in the act of rendering aid.

Chapter IV, Article 25 of the Geneva Convention states that: "Members of the armed forces specially trained for employment, should the need arise, as hospital orderlies, nurses or auxiliary stretcher-bearers, in the search for or the collection, transport or treatment of the wounded and sick shall likewise be respected and protected if they are carrying out these duties at the time when they come into contact with the enemy or fall into his hands." Article 29 reads: "Members of the personnel designated in Article 25 who have fallen into the hands of the enemy, shall be prisoners of war, but shall be employed on their medical duties insofar as the need arises."

According to the Geneva Convention, knowingly firing at a medic wearing clear insignia is a war crime.[2]

In modern times, most combat medics carry a personal weapon, to be used to protect themselves and the wounded or sick in their care.[3] When and if they use their arms offensively, they then sacrifice their protection under the Geneva Conventions. These medics are specifically trained.[4]

Surgeon Dominique Jean Larrey directed the Grande Armée of Napoleon to develop mobile field hospitals, or "ambulances volantes" (flying ambulances), in addition to a corps of trained and equipped soldiers to aid those on the battlefield. Before Larrey's initiative in the 1790s, wounded soldiers were either left amid the fighting until the combat ended or their comrades would carry them to the rear line.

It was during the American Civil War that Surgeon (Major) Jonathan Letterman, Medical Director of the Army of the Potomac, realized a need for an integrated medical treatment and evacuation system. He saw the need to equip this system with its own dedicated vehicles, organizations, facilities, and personnel. The Letterman plan was first implemented in September 1862 at the Battle of Antietam, Maryland.

In the United States, a report entitled "Accidental Death and Disability: The Neglected Disease of Modern Society (1966)", was published by National Academy of Sciences and the National Research Council. Better known as "The White Paper" to emergency providers, it revealed that soldiers who were seriously wounded on the battlefields of Vietnam had a better survival rate than those individuals who were seriously injured in motor vehicle accidents on California freeways. Early research attributed these differences in outcome to a number of factors, including comprehensive trauma care, rapid transport to designated trauma facilities, and a new type of medical corpsman, one who was trained to perform certain critical advanced medical procedures such as fluid replacement and airway management, which allowed the victim to survive the journey to definitive care.

File:U.S. army medic Afganistan.jpg
A U.S. Army combat medic (center) in Afghanistan. Note that the only distinguishing feature is the medical pack on his back.

The International Committee of the Red Cross, a private humanitarian institution based in Switzerland, provided the first official symbol for medical personnel. The first Geneva convention, originally called for "Amelioration of the Condition of the Wounded and Sick in Armed Forces in the Field," officially adopted the red cross on a field of white as the identifying emblem. This symbol was meant to signify to enemy combatants that the medic qualifies as a non-combatant, at least while providing medical care.[6] Islamic countries use a Red Crescent instead. During the 1876-1878 war between Russia and Turkey, the Ottoman Empire declared that it would use a red crescent instead of a red cross as its emblem, although it agreed to respect the red cross used by the other side. Although these symbols were officially sponsored by the International Federation of Red Cross and Red Crescent Societies, the Magen David Adom ("MDA"), Israel's emergency relief service, used the Magen David (a red star of David on a white background). Israeli medics still wear the Magen David. To enable MDA to become a fully recognized and participating member of the International Red Cross and Red Crescent Movement, Protocol III was adopted. It is an amendment to the Geneva Conventions relating to the Adoption of an Additional Distinctive Emblem and authorizes the use of a new emblem, known as the third protocol emblem or the Red Crystal. For indicative use on foreign territory, any national society can incorporate its unique symbol into the Red Crystal. Under Protocol III, the MDA will continue to employ the red Magen David for domestic use, and will employ the red crystal on international relief missions. 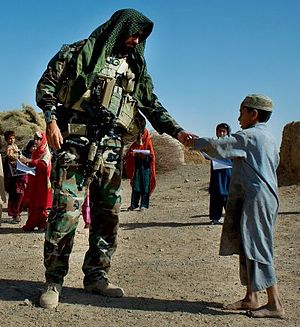 Traditionally, medical personnel did not carry weapons and wore a distinguishing red cross, to denote their protection as non-combatants under the Geneva Convention. This practice continued into World War II. However, the enemies faced by professional armies in more recent conflicts are often insurgents who either do not recognize the Geneva Convention, or do not care, and readily engage all personnel, irrespective of non-combatant status. Also, American medics in both theaters reported taking hostile fire. For these reasons, most modern combat medics are armed and do not wear distinguishing markings.[7] Combat Medics in the United States Army and United States Navy Hospital Corpsmen are virtually indistinguishable from regular combat troops, except for the extra medical equipment they carry.

USAF medics have frequently served attached to U.S. Army units in recent conflicts. Though all combat medical personnel are universally referred to as "medic", within different branches of the U.S. military, the skill level, quality of training and scope of work performed by medics varies from branch to branch. The U.S Army commonly addresses Line Medics as "Doc" provided that they have earned the title, as it does not come easily.

As a result of the 2005 BRAC, the U.S. Department of Defense has moved most medical training for all branches of the armed forces to Fort Sam Houston of Joint Base San Antonio.[8] A new Medical Education and Training Campus was constructed and the Air Force's 937th Training Group and Naval Hospital Corps School were relocated to Fort Sam Houston, joining the Army's existing Army Medical Department Center & School.[9] Although each service has some training particular to its branch, the bulk of the course material and instruction is shared between medical personnel of the different services.