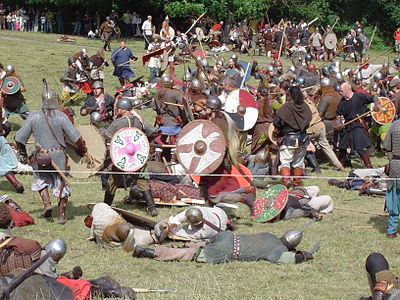 Reenactment of a Viking battle. Denmark, 2005.

Combat reenactment is a side of historical reenactment which aims to depict historical forms of combat. This may refer to either single combat, melees involving small groups, or nearly full-scale battles with hundreds of participants.

Depending on the intended effect, performances may have the aim of presenting historical martial arts reconstruction, or just offer entertainment, and different groups have different standards of authenticity. 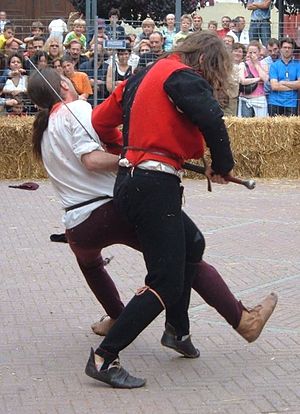 15th century German longsword demonstration at Furor et Ferrum 2007 (the action is the final stage of a "going-through" with a throw).
Main articles: Historical fencing and Staged fight

Demonstration of historical fencing begins with Alfred Hutton in the 1890s.

In the 2000s, several competition events for choreographed historical martial arts demonstrations were originated, combining the judgement of aspects of historical fencing techniques, stage combat qualities like acting and entertainment value, as well as historical accuracy of costumes and equipment. 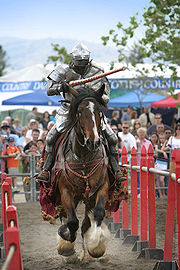 A contemporary knight jousting at a Renaissance Fair in Livermore California, 2006.

Reenactment of battles is a major and popular component of historical reenactment.

Due to the number of participants involved, most reenacted battles cannot be choreographed in any detail, and safety guidelines or "combat rules" are imposed on participants instead, prohibiting most realistic actions. Some reenactment battles take the form of a competition, where the two "armies" try to defeat each other within the actions permitted by the combat rules.

Battles in film are not inhibited by such restrictions, due to the possibilities of cutting and closeup. They are fully choreographed, and are not performed in a single go but divided into individual sequences.

The Society for Creative Anachronism fighting is based on Medieval fighting on foot, in the spirit of tournament fighting with wooden swords. The armor is handmade and based on historical artifacts. Unlike most reenactment events, the events are not pre-determined. It's a participatory sport; the fighters win or lose a bout, much like Karate or Judo.

Since the 1990s, an increasing number of companies offers replicas of historical arms and armour. Blade weapons used for combat reenactment are unsharpened, and specialized sparring weapons (e.g. Albion's "Maestro Line") also have rounded points. Blunt, flail and staff weapons are more problematic since the replica essentially has the same effectiveness as the "serious" version, unless rattan or latex weapons are employed, which in turn lack the characteristics of the originals and induce handling techniques inconsistent with the weapons they are supposed to represent.