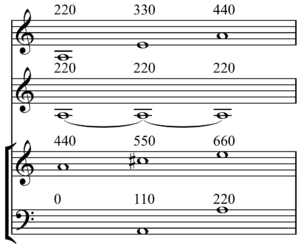 A combination tone (also called resultant or subjective tone[1]) is a psychoacoustic phenomenon of an additional tone or tones that are artificially perceived when two real tones are sounded at the same time. Their discovery is credited to the violinist Giuseppe Tartini (although he was not the first, see Sorge) and so are also called Tartini tones.

Combination tones can also be produced electronically by combining two signals in a circuit that has nonlinear distortion, such as an amplifier subject to clipping or a ring modulator.

One way a difference tone can be heard is when two tones with fairly complete sets of harmonics make a just fifth. This can be explained as an example of the missing fundamental phenomenon.[2] If

is the missing fundamental frequency, then

would be the frequency of the lower tone, and its harmonics would be

etc. Since a fifth corresponds to a frequency ratio of 2:3, the higher tone and its harmonics would then be

etc. When both tones are sounded, there are components with frequencies of

etc. The missing fundamental is heard because so many of these components refer to it.

The specific phenomenon that Tartini discovered was physical. Sum and difference tones are thought to be caused sometimes by the non-linearity of the inner ear. This causes intermodulation distortion of the various frequencies which enter the ear. They are combined linearly, generating relatively faint components with frequencies equal to the sums and differences of whole multiples of the original frequencies. Any components which are heard are usually lower, with the most commonly heard frequency being just the difference tone,

, though this may be a consequence of the other phenomena. Although much less common, the following frequencies may also be heard:

For a time it was thought that the inner ear was solely responsible whenever a sum or difference tone was heard. However, experiments show evidence that even when using headphones providing a single pure tone to each ear separately, listeners may still hear a difference tone[citation needed]. Since the peculiar, non-linear physics of the ear doesn't come into play in this case, it is thought that this must be a separate, neural phenomenon. Compare binaural beats.

Heinz Bohlen proposed what is now known as the Bohlen–Pierce scale on the basis of combination tones,[3] as well as the 833 cents scale.

A resultant tone (obsolete[4]) is, "produced when any two loud and sustained musical sounds are heard at the same time."[5]

In pipe organs,[6] this is done by having two pipes, one pipe of the note being played, and another harmonically related, typically at its fifth, being sounded at the same time. The result is a pitch at a common subharmonic of the pitches played (one octave below the first pitch when the second is the fifth, 3:2, two octaves below when the second is the major third, 5:4). This effect is useful especially in the lowest ranks of the pipe organ where cost or space could prohibit having a rank of such low pitch. For example, a 64' pipe would be costly and take up at least 32' of space (if capped) for each pipe. Using a resultant tone for such low pitches would eliminate the cost and space factor, but would not sound as full as a true 64' pipe.

This effect is most often used in the lowest octave of the organ only. It can vary from highly effective to disappointing depending on several factors, primarily the skill of the organ voicer, and the acoustics of the room the instrument is installed in.