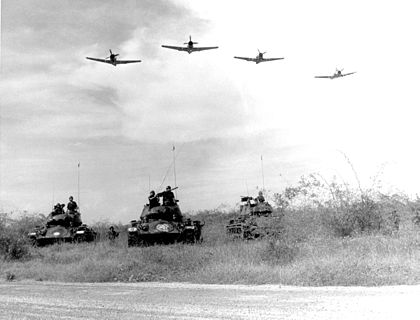 Combined arms is an approach to warfare which seeks to integrate different combat arms of a military to achieve mutually complementary effects (for example, using infantry and armor in an urban environment, where one supports the other, or both support each other).[1] According to strategist William S. Lind, combined arms can be distinguished from the concept of "supporting arms" as follows:

Though the lower-echelon units of a combined arms team may be of similar types, a balanced mixture of such units are combined into an effective higher-echelon unit, whether formally in a table of organization or informally in an ad hoc solution to a battlefield problem. For example an armored division—the modern paragon of combined arms doctrine—consists of a mixture of infantry, tank, artillery, reconnaissance, and perhaps even helicopter units, all coordinated and directed by a unified command structure.[3]

Also, most modern military units can, if the situation requires it, call on yet more branches of the military, such as fighter or bomber aircraft or naval forces, to support their operations. The mixing of arms is sometimes pushed down below the level where homogeneity ordinarily prevails, for example by temporarily attaching a tank company to an infantry battalion.

Combined arms operations dates back to antiquity, where armies would usually field a screen of skirmishers to protect their spearmen during the approach to contact. Especially in the case of the Greek hoplites however, the focus of military thinking lay almost exclusively on the heavy infantry. In more elaborate situations armies of various nationalities fielded different combinations of light, medium, or heavy infantry, cavalry, chariotry, camelry, elephantry, and artillery (mechanical weapons); the ancient Persian army is an excellent example of this. Combined arms in this context was how to best use the cooperating units, variously armed with side-arms, spears, or missile weapons in order to coordinate an attack to disrupt and then destroy the enemy.

Philip II of Macedon greatly improved upon the limited combined arms tactics of the Greek city-states and combined the newly created Macedonian Phalanx with heavy cavalry and other forces. The Phalanx would hold the opposing line in place, until the heavy cavalry could smash and break the enemy line by achieving local superiority.

The pre-Marian Roman Legion was a combined arms force and consisted of five classes of troops. Lightly equipped velites acted as skirmishers armed with light javelins. The hastati and principes formed the main attacking strength of the legion with sword and pilum, whilst the triarii formed the defensive backbone of the legion fighting as a phalanx with long spears and large shields. The fifth class were the equites, the cavalry, used for scouting, pursuit and to guard the flanks.

After the Marian reforms the Legion was notionally a unit of heavy infantrymen armed with just sword and pilum, and fielded with a small attached auxiliary skirmishers and missile troops, and incorporated a small cavalry unit.

The legion was sometimes also incorporated into a higher-echelon combined arms unit—e.g., in one period it was customary for a general to command two legions plus two similarly sized units of auxiliaries, lighter units useful as screens or for combat in rough terrain.

The army of the Han Dynasty is also an example, fielding melee infantry, crossbowmen, and cavalry (ranging from horse archers to heavy lancers).

Civilizations such as the Carthaginians and Sassanids also were known to have fielded a combination of infantry supported by powerful cavalry.

At the Battle of Hastings (1066) English infantry fighting from behind a shield wall were defeated by a Norman army consisting of archers, infantry and mounted knights (cavalry). One of the tactics used by the Normans was to tempt the English to leave the shield wall to attack retreating Norman infantry only to destroy them in the open with cavalry. Likewise Scottish sheltrons—which had been developed to counter the charges by English heavy cavalry, and had been used successfully against English cavalry at the Battle of Stirling Bridge (1297)—were destroyed at the Battle of Falkirk 1298 by English archers acting in concert with mounted knights. Both Hastings and Falkirk showed how combined arms could be used to defeat enemies relying on only one arm.[4]

The English victories of Crecy, Poitiers and Agincourt were examples of a simple form of combined arms, with a combination of dismounted knights forming a foundation for formations of English longbowmen. The lightly protected longbowmen could down their French opponents at a distance, whilst the armoured men-at-arms could deal with any Frenchmen who made it to the English lines. This is the crux of combined arms: to allow a combination of forces to achieve what would be impossible for its constituent elements to do alone.

17th century saw increasing use of combined arms at lower (regimental) level. King Gustavus Adolphus of Sweden was the proponent of the idea. For fire support he attached teams of "commanded musketeers" to cavalry units and fielded light 3-pounder guns to provide infantry units with organic artillery.

In Japan, in battle of Nagashino (長篠の戦い) in 1575, forces of Oda clan successfully employed combined arms against Takeda clan army which heavily relied on cavalry. The Oda army erected palisades to protect their ashigaru musketeers that downed Takeda's cavalry while their samurai cut down any enemies who managed to approach melee range.

In the eighteenth century, the concept of the legion was revived. Legions now consisted of musketeers, light infantry, dragoons and artillery in a brigade sized force. These legions often combined professional military personnel with militia. Perhaps the most notable example is the use of light cavalry, light infantry and light horse artillery in advance detachments by France's La Grande Armée during the Napoleonic Wars.

After 25 years of near continuous warfare, the armies that met at the Battle of Waterloo were organised in a similar manner–into corps which contained infantry, cavalry and artillery (see Order of battle of the Waterloo Campaign), and used similar combined arms tactics. Within each corps were divisions of infantry or cavalry made up of brigades and an artillery unit. An army would usually also have reserves of all three arms under the direct command of the army commander which could be sent in support of any corps or division of a corps to increase any arm which the army general considered necessary. The great French cavalry charge commanded by Marshal Ney during the battle failed to break Wellington's squares of infantry and Ney's failure to supplement his cavalry with sufficient horse artillery to break the squares open is usually given as a major contributing factor in the failure. It is an example of why generals needed to use combined arms to overcome the tactics used by enemy officers to frustrate an attack by a single arm of an army.[5]

In contrast the 27th (Inniskilling) suffered 478 casualties from an initial strength of 750 because of their exposure to attack by French combined arms. The were located near the centre of Wellington's line, but unlike most of the rest of Wellington's infantry were in a declivity on the exposed side of the Mont-Saint-Jean escarpment. Exposed as they were, they were forced to stand in square for most of the day for fear of cavalry attack and so made an easy dense target for Napoleon's massed artillery.[6]

The development of modern combined arms tactics began in the First World War. Early in the war, fighting descended into stagnant trench warfare. Generals on both sides applied conventional military thinking to the new weapons and situations that they faced. In these early stages, tactics typically comprised heavy artillery barrages followed by massed frontal assaults against well entrenched enemies. These tactics were largely unsuccessful and resulted in large loss of life.

As the war progressed new combined arms tactics were developed, often described then as the "all arms battle". These included direct close artillery fire support for attacking soldiers (the creeping barrage), air support and mutual support of tanks and infantry. One of the first instances of combined arms was the Battle of Cambrai, in which the British used tanks, artillery, infantry, small arms and air power to break through enemy lines.[7] Previously such a battle would have lasted months with many hundreds of thousands of casualties. Co-ordination and pre-planning were the key elements, and the use of combined arms tactics in the Hundred Days Offensive in 1918 allowed the Allied forces to exploit breakthroughs in the enemy trenches, forcing the surrender of the Central Powers.

In 1963 the United States Marine Corps formalized the concept of the Marine Air-Ground Task Force, which combined Marine aviation and Marine ground units for expeditionary missions.[8]

The Vietnam War had a profound influence on the development of the US Army's combined arms doctrine. Due to the very difficult terrain that prevented access to the enemy held areas of operation, troops were often deployed by air assault. For this reason, US troops in Vietnam saw six times more combat than in preceding wars, due to less time spent on logistic delays. The result; an infantry unit increased in effectiveness by a factor of four for its size, when supported with helicopter-delivered ammunition, food and fuel.[9] In time the US Army in Vietnam also learned to combine helicopter operations and airmobile infantry with the armoured and artillery units operating from fire support bases as well as the US brown-water navy and USAF Close Air Support units supporting them.[10]

In the 1991 Gulf War a mix of strikes by fixed-wing aircraft including carpet bombing and precision bombing was used in combination with large numbers of strikes by attack helicopters. During the ground assault phase tanks and other AFV's supported by attack aircraft swept over remaining forces. The front line moved forward at upwards of 40–50 km/h at the upper limit of the Army's tracked vehicles.

In 2000, the US Army began developing a new set of doctrines intended to use information superiority to wage warfare. Six pieces of equipment were crucial for this: AWACS, an air-borne look-down radar JSTARS, GPS, the lowly SINCGARS VHF digital radio, and ruggedized PCs. The mix is supplemented by satellite photos and passive reception of enemy radio emissions, forward observers with digital target designation, specialized scouting aircraft, anti-artillery radars and gun-laying software for artillery. Everything feeds into the network.

Based on this doctrine, many U.S. ground vehicles moved across the landscape alone. If they encountered an enemy troop or vehicle concentration, they would assume a defensive posture, lay down as much covering fire as they could, designate the targets for requested air and artillery assets. Within a few minutes, on station aircraft would direct their missions to cover the ground vehicle. Within a half hour heavy attack forces would concentrate to relieve the isolated vehicle. In an hour and a half the relieved vehicle would be resupplied.