From Infogalactic: the planetary knowledge core
Jump to: navigation, search
This article is about vehicle manufacturer. For the town in France, see Commer, Mayenne. For the youth organisation, see Commers. For the punctuation mark, see comma. 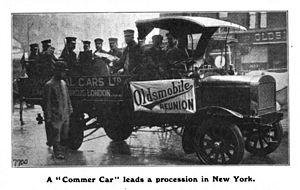 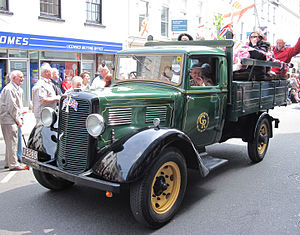 This business belonged to Commercial Cars Limited a company incorporated in September 1905 by directors H C B Underdown,[note 1] barrister and director of Direct United States Cable Co with H G Hutchinson a director of Royal Exchange Assurance[1] to manufacture: commercial cars, omnibuses, chars-a-bancs, fire engines and every kind of industrial vehicle. In 1920 it was described as the first Company to specialise in the manufacture of internal combustion industrial commercial vehicles.[2] In order to go into volume production a site was bought in September 1905 at Biscot Road, Biscot, Luton.[3] Construction of extensive new workshops began on the five acre site which was mostly complete by late 1906. Commercial Cars became a member of the Society of Motor Manufacturers and Traders in August 1906.[4] It was one of the first manufacturers of commercial vehicles in the United Kingdom, its speciality being the Commer Car.[5]

At Olympia's Commercial Motor Show in March 1907 Commer exhibited a motor-bus chassis with a 30-36 horsepower engine and a gearbox invented by Mr Linley, the works manager.[note 2] Dog-clutches made the change rather than the spur wheels which remained in constant mesh. As well as the bus chassis Commer displayed a char-a-banc for thirty passengers and delivery vans being run by a substantial enterprise.[6]

A new "large and powerful" lorry, E43, registration BM 787, took part in the The Great Commercial Motor Trials in September 1907. It also had a constant mesh gearbox (Comer (sic) slogan—'dogs which bite with a click'). Unladen weight was (3.7 tonnes) 3 tons 13 cwt, the engine had four-cylinders, its output was 33 horsepower at 800 rpm. It had four forward speeds and was driven by side chains. Length 20 feet (6 metres), width just over (2.1 metres) seven feet and height (1.76 metres) two inches under six feet. The platform was (3.6 metres) twelve feet long. The newspaper noted that a Comercars "chassis" was transporting passengers at Widnes.[7]

Production of the first truck, the 3-ton RC type started in 1907. Their first bus was made in 1909. With the outbreak of the First World War the factory turned to the manufacture of military vehicles for the British Army, and by 1919 more than 3000 had been made.

Though obliged to undergo financial restructure in 1920 in the hope of avoiding creditors the business was unable to avoid repayment of a debt of £75,000 due to the Treasury raised in order to pay 60 per cent Excess Profits Duty on wartime activities. Eventually after agreeing terms with the Receiver in 1925 Commer was bought in 1926 by Humber.[8] In 1931 Humber became a 60 per cent owned subsidiary of the Rootes Group.

The Commer name was replaced by the Dodge name during the 1970s following the takeover of Rootes by Chrysler Europe. After Peugeot purchased Chrysler Europe in 1978, the Commer factory was run in partnership with the truck division of Renault, Renault Trucks. It continued to produce the Dodge commercial truck range for some time, with Renault badges and a small amount of product development, eventually these were cancelled in favour of mainstream Renault models and switching production at the factory to production of Renault truck and bus engines in the early 1990s.

Many Commer vans and lorries are notable for being fitted with the Rootes TS3 engine, a two-stroke diesel three-cylinder horizontally opposed piston engine, which came to be known as the "Commer Knocker" owing to the distinct noise it produced.[9] Newer Commer vehicles had Perkins and Cummins diesel engines, and less commonly Mercedes diesel engines.[10] 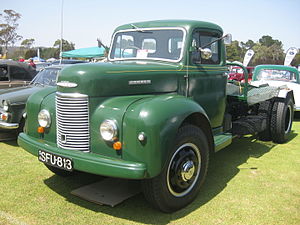 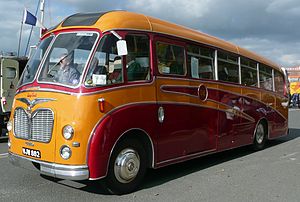 Commer produced buses and is recorded as delivering four to Widnes in 1909.[12] The Commando was released after the Second World War, and the Avenger on 28 February 1948, fitted with the TS3 engine from 1954.[13] 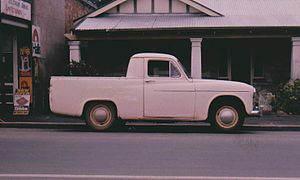 Australian production circa 1950 included a coupé utility variant with an additional side window.[16] 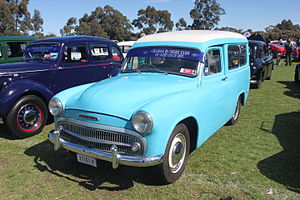 The Commer Express Delivery Van was a light commercial vehicle produced by Commer during the 1950s, competing in the 8-10cwt van range.[17] It was based on the Hillman Minx saloon and evolved in parallel with that model,[17] with designations ranging from Mark III to Mark VIIIB.[18] The 1957 model, which featured a load space of 100 cu ft (2.8 m3) and a payload of approximately 9 cwt, was powered by a 1390cc four-cylinder Hillman engine and was fitted with a four-speed column-change gearbox.[17] 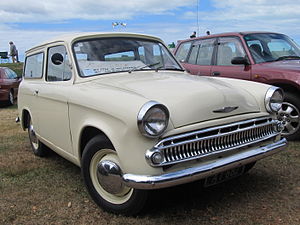 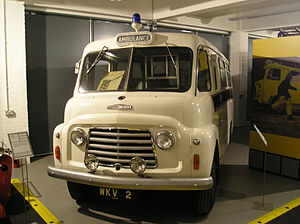 Many examples of these vans were coach-built as ice cream vans.[24] The Commer Walk-Thru was introduced in 1961 as a replacement for the Commer BF.[25] The Walk-Thru was offered in 1½ ton, 2 ton and 3-ton van and cab-chassis variants with a choice of diesel or petrol engines.[25] The Commer FC was introduced in 1960 with many body styles, including a 1,500 cc (92 cu in) van. After engine and interior upgrades it was renamed the PB in 1967 and the SpaceVan in 1974. As noted above, it would be sold as a Dodge and Fargo model until 1976, when both Commer and Fargo names were dropped. These were rounded-front forward-control vans with narrow front track—a legacy of their Humber car-derived suspension. Utilising at first the Hillman-derived 1500 cc 4-cylinder engine in the PA series, then the larger 1,600 cc (98 cu in), and from 1968 onwards the 1,725 cc (105.3 cu in) unit in the PB, only the cast-iron-head version of this engine were used. A Perkins 4108 diesel was also available.

Reportedly, one condition of the government bailout of Chrysler's British operations in 1976 was a commitment to upgrade the Spacevan, which was praised for its brakes, cornering, and price, but criticized for its power, comforts, and top speed.[10] A revised Spacevan was thus introduced in 1977, using the same mechanicals but with numerous cosmetic changes, conveniences, and a new interior. Although outdated by its demise in 1982, by which time Commer had been taken over by Peugeot, the Spacevan remained a familiar sight in the UK thanks to its role with Post Office Telephones—which was almost solely responsible for it remaining in production for so long and these vans and outstanding orders were inherited by British Telecom on its formation in October 1981. By this time, there were three engines: two 1.7 L petrol engines of 37 kW (with low compression) and 42 kW (with high compression), and a small diesel engine (31 kW), with a four-speed manual transmission and no automatic available. The last Spacevan was built in 1983.[26] 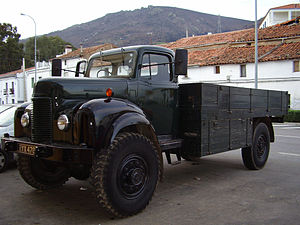 Commer made a range of military vehicles for use during the Second World War, with the range still in use in the 1980s. While serving in the army, British humourist Frank Muir reported a broken-down vehicle over his radio with the words "The Commer has come to a full stop."[27]

Commer designed and manufactured its own diesel engines for its heavy commercial vehicles and buses. They were low-profile units designed to be deployed under the floor of the cab. 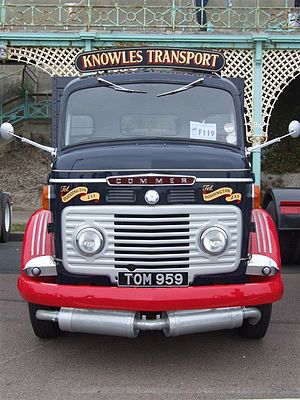 The TS3 engine was a two-stroke diesel unit with three cylinders each containing a pair of pistons arranged with the combustion chamber formed between the crown of the piston pair and the cylinder walls. It was designed specifically for the Commer range of trucks.[28] The TS3 and derivative TS4 were unique in using rockers to deliver power to the single crankshaft.[29]

The TS4 engine ran 1.2 million miles as a pre-production prototype. It was a 4-cylinder version of the TS3.[30] 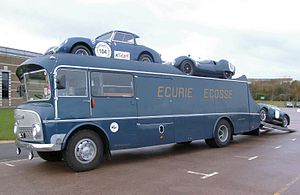 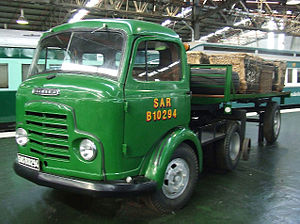 Commer acquired the Karrier company in 1934[32] and Karrier joined the Rootes Group.[33] Special products in their catalogue included their Cob tractor, their "mechanical horse" originated by Karrier in 1930, and municipal motor appliances: refuse collectors, sweepers and trolley buses. The Cob had been supplied to the Southern, LNE and LM&S railway companies and repeat orders were in hand at the time Karrier was bought.[32]

In the early 1960s production moved to Dunstable where Commer, Dodge (UK) and Karrier were all brought together.

The Karrier trademark is now owned by Peugeot.