Commercial paper, in the global financial market, is an unsecured promissory note with a fixed maturity of no more than 270 days.

Commercial paper is a money-market security issued (sold) by large corporations to obtain funds to meet short-term debt obligations (for example, payroll), and is backed only by an issuing bank or corporation's promise to pay the face amount on the maturity date specified on the note. Since it is not backed by collateral, only firms with excellent credit ratings from a recognized credit rating agency will be able to sell their commercial paper at a reasonable price. Commercial paper is usually sold at a discount from face value, and generally carries lower interest repayment rates than bonds due to the shorter maturities of commercial paper. Typically, the longer the maturity on a note, the higher the interest rate the issuing institution pays. Interest rates fluctuate with market conditions, but are typically lower than banks' rates.

Commercial paper – though a short-term obligation – is issued as part of a continuous rolling program, which is either a number of years long (as in Europe), or open-ended (as in the U.S.).[1]

The use of commercial paper has been adopted by every state in the United States except Louisiana.[2]

Outside of the United States the international Euro-Commercial Paper Market has over $500 billion in outstandings, made up of instruments denominated predominately in euros, dollars and sterling.[4]

Commercial credit, in the form of promissory notes issued by corporations, has existed since at least the 19th century. For instance, Marcus Goldman, founder of Goldman Sachs got his start trading commercial paper in New York in 1869.[5] 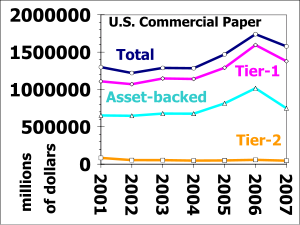 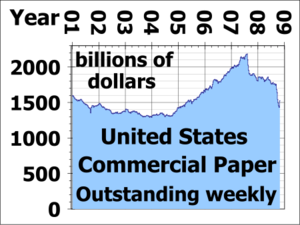 There are two methods of issuing credit. The issuer can market the securities directly to a buy and hold investor such as most money market funds. Alternatively, it can sell the paper to a dealer, who then sells the paper in the market. The dealer market for commercial paper involves large securities firms and subsidiaries of bank holding companies. Most of these firms also are dealers in US Treasury securities. Direct issuers of commercial paper usually are financial companies that have frequent and sizable borrowing needs and find it more economical to sell paper without the use of an intermediary. In the United States, direct issuers save a dealer fee of approximately 5 basis points, or 0.05% annualized, which translates to $50,000 on every $100 million outstanding. This saving compensates for the cost of maintaining a permanent sales staff to market the paper. Dealer fees tend to be lower outside the United States.

Commercial paper is a lower-cost alternative to a line of credit with a bank. Once a business becomes established, and builds a high credit rating, it is often cheaper to draw on a commercial paper than on a bank line of credit. Nevertheless, many companies still maintain bank lines of credit as a "backup". Banks often charge fees for the amount of the line of the credit that does not have a balance, because under the capital regulatory regimes set out by the Basel Accords, banks must anticipate that such unused lines of credit will be drawn upon if a company gets into financial distress. They must therefore put aside equity capital to account for potential loan losses also on the currently unused part of lines of credit, and will usually charge a fee for the cost of this equity capital.
Advantage of commercial paper:

Like treasury bills, yields on commercial paper are quoted on a discount basis—the discount return to commercial paper holders is the annualized percentage difference between the price paid for the paper and the face value using a 360-day year. Specifically, where

is the discount yield,

is the face value,

is the price paid, and

is the term length of the paper in days:

and when converted to a bond equivalent yield (

Defaults on high quality commercial paper are rare, and cause concern when they occur.[10] Notable examples include: