Communications Workers of America (CWA) is the largest communications and media labor union in the United States, representing about 600,000 members in both the private and public sectors.[1] The union has 27 locals in Canada via CWA-SCA Canada (Syndicat des communications d’Amérique) representing about 8,000 members. CWA has several affiliated subsidiary labor unions bringing total membership to over 700,000. CWA is headquartered in Washington, DC, and affiliated with the AFL-CIO, the Canadian Labour Congress, and Union Network International. The current president is Chris Shelton.

In 1918 telephone operators organized under the Telephone Operators Department of the International Brotherhood of Electrical Workers. While initially successful at organizing, the union was damaged by a 1923 strike and subsequent AT&T lockout. After AT&T installed company-controlled Employees' Committees, the Telephone Operators Department eventually disbanded.[2] The CWA's roots lie in the 1938 reorganization of telephone workers into the National Federation of Telephone Workers after the Wagner Act outlawed such employees' committees or company unions. NFTW was a federation of sovereign local independent unions that lacked authority over the affiliated local unions leaving it at a serious organizational disadvantage. After losing a strike with AT&T in 1947, the federation led by Joseph A. Beirne,[3] reorganized as CWA, a truly national union, which affiliated with the Congress of Industrial Organizations in 1949. CWA has continued to expand into areas beyond traditional telephone service. In 1994 the National Association of Broadcast Employees and Technicians merged with the CWA and became The Broadcasting and Cable Television Workers Sector of the CWA, NABET-CWA. Since 1997, it includes The Newspaper Guild, and since 2000 it includes Human Rights Watch's support staff. In 2004, the Association of Flight Attendants merged with CWA, and became formally known as the Association of Flight Attendants-CWA, or AFA-CWA.

Following is a partial list of contracts and strikes that the Communications Workers of America were involved in:[4][5][6] 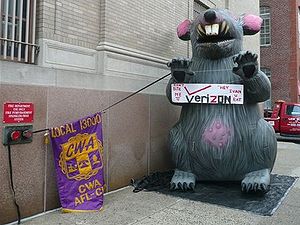 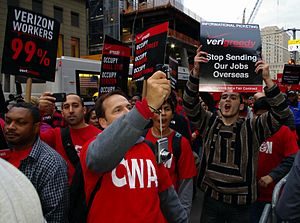 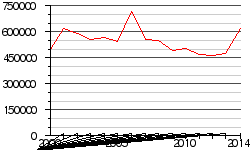 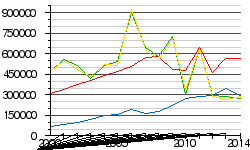 According to CWA's Department of Labor records since 2006, when membership classifications were first reported, the total reported membership has varied greatly and unpredictably due to the addition and removal of reported membership categories.[9] As of 2014, around 27%, or a fourth, of the union's total membership are classified as "non-dues-paying retirees," and not eligible to vote in the union. The other, voting eligible, classifications are "active" (65%) and "dues-paying retired" (8%). CWA contracts also cover some non-members, known as agency fee payers, which number comparatively about 7% of the size of the union's membership. This accounts for 166,491 "non-dues-paying retirees" and 52,240 "dues-paying retirees," plus about 43,353 non-members paying agency fees, compared to 404,289 "active" members.[1]