From Infogalactic: the planetary knowledge core
Jump to: navigation, search
This article is about interpersonal bonds in Christianity. For the Christian rite reenacting the Last Supper, see Eucharist.

The bond uniting Christians as individuals and groups with each other and with Jesus Christ, is described as communion.

The term is derived from Latin communio (sharing in common).[1] The corresponding term in Greek is κοινωνία, which is often translated as "fellowship". In Christianity, the basic meaning of the term communion is an especially close relationship of Christians, as individuals or as a church, with God and with other Christians.

This basic meaning of the word predates its Christian uses. In Ancient Greek, κοινωνία could apply to a business partnership, to fellowship of life in marriage, to a spiritual relationship with divinity, to comradely fellowship between friends, to a community or society.[2]

In the New Testament the word is applied, according to the context, to communion, sharing or fellowship with:

I. Common life in general (only in Acts 2:42)
II. Communion between particular groups, the most remarkable instance of which was that between Jews and Gentiles
III. Communion in the Body and Blood of Christ
IV. Sharing in divine revelation and with God himself (1 John 1:1-7).[3] 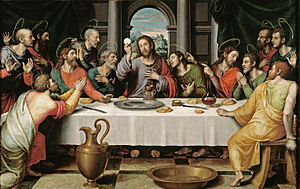 The Eucharist has been a key theme in the depictions of the Last Supper in Christian art,[4] as in this 16th-century Juan de Juanes painting.

By metonymy, the term is used of a group of Christian churches that have this close relationship of communion with each other. An example is the Anglican Communion.

If the relationship between the churches is complete, involving fullness of "those bonds of communion – faith, sacraments and pastoral governance – that permit the Faithful to receive the life of grace within the Church",[1] it is called full communion. However, the term "full communion" is frequently used in a broader sense, to refer instead to a relationship between Christian churches that are not united, but have only entered into an arrangement whereby members of each church have certain rights within the other.

If a church recognizes that another church, with which it lacks bonds of pastoral governance, shares with it some of the beliefs and essential practices of Christianity, it may speak of "partial communion" between it and the other church.

The communion of saints is the relationship that, according to the belief of Christians, exists between them as people made holy by their link with Christ. That this relationship extends not only to those still in earthly life, but also to those who have gone past death to be "away from the body and at home with the Lord" (2 Corinthians 5:8) is a general belief among Christians.[5] Their communion is believed to be "a vital fellowship between all the redeemed, on earth and in the next life, that is based on the common possession of the divine life of grace that comes to us through the risen Christ".[6]

Since the word rendered in English as "saints" can mean not only "holy people" but also "holy things", "communion of saints" also applies to the sharing by members of the church in the holy things of faith, sacraments (especially the Eucharist), and the other spiritual graces and gifts that they have in common.

The term "communion" is applied to sharing in the Eucharist by partaking of the consecrated bread and wine, an action seen as entering into a particularly close relationship with Christ. Sometimes the term is applied not only to this partaking but to the whole of the rite or to the consecrated elements.