From Infogalactic: the planetary knowledge core
Jump to: navigation, search
This article is about sovereign states governed by Communist parties. For the social movement and political ideology, see Communism. For the hypothetical system postulated in Marxism, see Communist society. 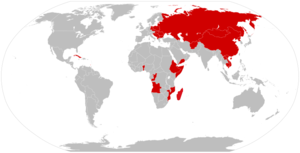 Map of countries that declared themselves to be socialist states under the Marxist–Leninist or Maoist definition—that is to say, "Communist states"—between 1979 and 1983. This period marked the greatest territorial extent of Communist states.

Communist state is a term used by Western historians, political scientists, and media to refer to states that are governed by a single party adhering to some variation of Marxist–Leninism as its guiding ideology.[1] However, contrary to Western usage, these states do not describe themselves as "communist" nor do they claim to have achieved communism. They refer to themselves as Socialist states or Workers' states that are in the process of constructing socialism.[2][3]

A "Communist state" is ruled by a one-party that professes Marxist-Leninism or some variation thereof, and aims to achieve socialism and then progress toward communism. Most communist states have been states with a form of government characterized by one-party rule or a dominant-party system, organized around the political structures of democratic centralism with the party supposedly representing the Vanguard of the working class.

Communist party as the leader of the state

In the theories of German philosopher Karl Marx, a state in any society is an instrument of oppression by one social class over another, historically a minority exploiter class ruling over a majority exploited class. Marx saw that in his contemporary time, the new nation states were characterized by increasingly intensified class contradiction between the capitalist class and the working class it ruled over. He predicted that if the class contradictions of the capitalist system continue to intensify, that the working class will ultimately become conscious of itself as an exploited collective and will overthrow the capitalists and establish collective ownership over the means of production, therein arriving at a new phase of development called Socialism (in Marxist understanding). The state ruled by the working class during the transition into classless society is called the "dictatorship of the proletariat". Vladimir Lenin created revolutionary vanguard theory in an attempt to expand on the concept. Lenin saw that science is something that is initially practicable by only a minority of society who happen to be in a position free from distraction so that they may contemplate it, and believed that scientific socialism was no exception. He therefore advocated that the Communist party should be structured as a vanguard of those who have achieved full class consciousness to be at the forefront of the class struggle and lead the workers to expand class consciousness and replace the capitalist class as the ruling class, therein establishing the Proletarian state.

These communist states often do not claim to have achieved socialism or communism in their countries; rather, they claim to be building and working toward the establishment of socialism in their countries. For example, the preamble to the Socialist Republic of Vietnam's constitution states that Vietnam only entered a transition stage between capitalism and socialism after the country was re-unified under the Communist party in 1976,[4] and the 1992 constitution of the Republic of Cuba states that the role of the Communist Party is to "guide the common effort toward the goals and construction of socialism".[5]

Communist states share similar institutions, which are organized on the premise that the Communist party is a vanguard of the proletariat and represents the long-term interests of the people. The doctrine of democratic centralism, which was developed by Vladimir Lenin as a set of principles to be used in the internal affairs of the communist party, is extended to society at large.[6]

The constitutions of most socialist states describe their political system as a form of democracy.[7] Thus, they recognize the sovereignty of the people as embodied in a series of representative parliamentary institutions. Such states do not have a separation of powers; instead, they have one national legislative body (such as the Supreme Soviet in the Soviet Union) which is considered the highest organ of state power and which is legally superior to the executive and judicial branches of government.[8]

Such national legislative politics in socialist states often have a similar structure to the parliaments that exist in liberal republics, with two significant differences: first, the deputies elected to these national legislative bodies are not expected to represent the interests of any particular constituency, but the long-term interests of the people as a whole; second, against Marx's advice, the legislative bodies of socialist states are not in permanent session. Rather, they convene once or several times per year in sessions which usually last only a few days.[9]

When the national legislative body is not in session, its powers are transferred to a smaller council (often called a presidium) which combines legislative and executive power, and, in some socialist states (such as the Soviet Union before 1990), acts as a collective head of state. In some systems, the presidium is composed of important communist party members who vote the resolutions of the communist party into law.

A feature of socialist states is the existence of numerous state-sponsored social organizations (trade unions, youth organizations, women's organizations, associations of teachers, writers, journalists and other professionals, consumer cooperatives, sports clubs, etc.) which are integrated into the political system.

In some socialist states,[which?] representatives of these organizations are guaranteed a certain number of seats on the national legislative bodies. In socialist states, the social organizations are expected to promote social unity and cohesion, to serve as a link between the government and society, and to provide a forum for recruitment of new communist party members.[10]

Historically, the political organization of many socialist states has been dominated by a one-party monopoly. Some communist governments, such as North Korea, East Germany or Czechoslovakia have or had more than one political party, but all minor parties are or were required to follow the leadership of the communist party. In socialist states, the government may not tolerate criticism of policies that have already been implemented in the past or are being implemented in the present.[11]

Nevertheless, communist parties have won elections and governed in the context of multi-party democracies, without seeking to establish a one-party state. Examples include San Marino, Nicaragua (1979-1990),[12] Moldova, Nepal (presently), Cyprus,[13] and the Indian states of Kerala, West Bengal and Tripura.[14] However, for the purposes of this article, these entities do not fall under the definition of socialist state.

Communist states were criticized as one-party dictatorships, with totalitarian control of the economy and society and repression of civil liberties,[15] economic focus on heavy industry at the expense of consumer goods, sometimes resulting in shortages of vital products or even famine,[16] and militarism, censorship, and propaganda to cover up the mistakes of the government .[17]

In his critique of states run under Marxist–Leninist ideology, economist Michael Ellman of the University of Amsterdam notes that such states compared favorably with Western states in some health indicators such as infant mortality and life expectancy.[18] Similarly, Amartya Sen's own analysis of international comparisons of life expectancy found that several Marxist–Leninist states made significant gains, and commented "one thought that is bound to occur is that communism is good for poverty removal."[19]

A map of states described as communist as of 2015

The following countries are one-party states in which the institutions of the ruling communist party and the state have become intertwined. They are generally adherents of Marxism–Leninism in particular. They are listed here together with the year of their founding and their respective ruling parties:[20]

There are multi-party states with communist parties leading the government. Such states are not considered to be communist states as the countries themselves allow for multiple parties, and do not provide a constitutional role for their communist parties.