Community centres generally perform many (though rarely all) the following functions in its community (Note this list is intended to define which meaning of the phrase community centre is covered by this article rather than being facts about what some other sources associate with that phrases, though adding source confirming that other sources use the phrase in a similar way would be nice). 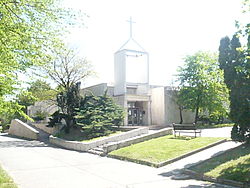 Around the world (and sometimes within single countries) there appear to be 4 common ways in which the operation of the kind of community centre are owned and organised[citation needed]. In the following description "Government" may refer to the ordinary secular government or to a dominant religious organisation such as the Roman Catholic Church; and it may refer to the central national or international branch or to the local subdivision of it.

Each individual community centre typically has its own peculiar origin and history, though some variants seem to be common[citation needed].

Early forms of community centres in the United States were based in schools providing facilities to inner city communities out of school hours. An early celebrated example of this is to be found in Rochester, New York from 1907. Edward J. Ward, a Presbyterian minister, joined the Extension Department at the University of Wisconsin–Madison, organizing the Wisconsin Bureau of Civic and Social Development. By 1911 they organized a country-wide conference on schools as social centres. Despite concerns expressed by politicians and public officials that they might provide a focus for alternative political and social activity, the idea was successful. In 1916, with the foundation of the National Community Center Association, the term Community Center was generally used in the US. By 1918 there were community centres in 107 US cities, and in 240 cities by 1924. By 1930 there were nearly 500 centres with more than four million people regularly attending. The first of these was Public School 63, located in the Lower East Side. Clinton Child's, one of the organizers, described it as

"A Community organized about some centre for its own political and social welfare and expression; to peer into its own mind and life, to discover its own social needs and then to meet them, whether they concern the political field, the field of health, of recreation, of education, or of industry; such community organization is necessary if democratic society is to succeed and endure".

In the UK many villages and towns have their own Community Centre, although nearby schools may offer their assembly or dining hall after school for Community Centre activities. For example, local schools near Ouston may host dance, or sporting activities provided by a local community centre.[2]

Parks are also considered community centers. Another pioneer of community centres was Mary Parker Follett, who saw community centres as playing a major part in her concept of community development and democracy seen through individuals organizing themselves into neighborhood groups, and attending to people's needs, desires and aspirations. This can also include parks.

In the United Kingdom, the oldest community centre is possibly that which was established in 1901 in Thringstone, Leicestershire by the old age pensions pioneer, Charles Booth (1847-1916). Extended in 1911 and taken over by the Leicestershire County Council in 1950, this centre still thrives as an educational, social and recreational community resource and was the inspiration for numerous others of its kind.

There are also community centres for a specific purpose, but serving the whole community, such as an arts centre.

Community centres online are defined as a web based interactive, user-submitted network for groups, organisations, or businesses. Users create their own personal profiles, blogs, groups, photos, art, calendars, music and videos to display on their own pages. Administrators provide oversight to the content and approve membership of users.

In Singapore, community centres are distinct buildings that are officially designated by the government of Singapore. They are meant to play an urban planning role especially as part of Housing Development Board projects. Enrichment and grassroots organisation are their functions like most other community centres, but relieving traffic congestion concerns by placing community centres nearby is also another reason.