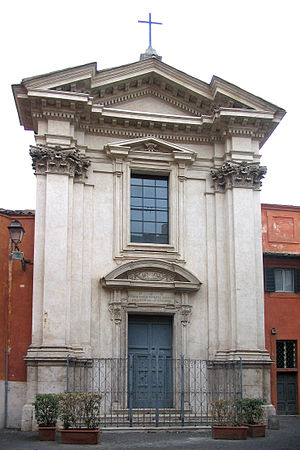 The Community of Sant'Egidio (Italian: Comunità di Sant'Egidio) is a Christian community that is officially recognized by the Catholic Church as a "Church public lay association". It claims 50,000 members in more than 70 countries. Its main activities are:

The Community of Sant'Egidio was founded in Rome in 1968 by a group of Roman high-school students led by Andrea Riccardi. It is named after the Roman Church of Sant'Egidio (Italian for Saint Giles) in Trastevere, its first permanent meeting place. Since 1968, the community has gathered each night to pray and read from the Bible, reflecting on the Gospel, eventually spreading throughout the world with a mission of helping those in need. Their activities include setting up refuges for the old, hospices for AIDS patients, and printing a handbook titled "Where to Eat, Sleep, and Wash in Rome" as gifts to the homeless. The lay Catholic Community of Sant'Egidio is among global leaders on HIV/AIDS, running programs across Africa, pushing scientific research inter alia on mother-child transmission, and advocating passionately that everyone deserves the best care.[1]

The charitable efforts of Sant'Egidio also led it to be a well-regarded mediator in peace negotiations. In the late 1980s, the Community came to the realization that their humanitarian efforts in Mozambique, then torn by the Mozambican Civil War, could not succeed without peace. In 1990, the Community was accepted by the ruling FRELIMO and rebel Mozambican National Resistance as a mediator, playing a key role in the Rome General Peace Accords signed in 1992.[2] They continue peace initiatives in Algeria (notably the 1995 Sant'Egidio Platform), the Balkans, the Democratic Republic of the Congo, and other areas, in the belief that war is the "mother of every poverty”.

The community of Sant'Egidio shows its commitment against the death penalty by maintaining penpalships with many Death convicts, collecting signatures for a moratorium of executions and inviting cities around the world to take part in the Cities for Life Day.

The president of the Community as of September  2012[update] is Marco Impagliazzo.

The Community of Sant'Egidio has received numerous honors and recognitions.[3] These include: