Community property is a marital property regime that originated in civil law jurisdictions and is now also found in some common law jurisdictions. The states of the United States that recognize community property are primarily in the West; it was inherited from Mexico's ganancial community system,[1] which itself was inherited from Spanish law (a Roman-derived civil law system) and ultimately from the Visigothic Code.[2] While under Spanish rule, Louisiana adopted the ganancial community system of acquests and gains, which replaced the traditional French community of movables and acquests in its civil law system.[3] 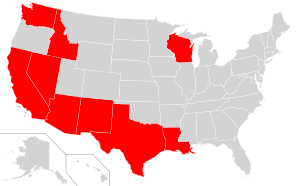 In a community property jurisdiction, most property acquired during the marriage (except for gifts or inheritances)—the community, or communio bonorum—is owned jointly by both spouses and is divided upon divorce, annulment, or death. Joint ownership is automatically presumed by law in the absence of specific evidence that would point to a contrary conclusion for a particular piece of property.[4]

The community property system is usually justified by the pragmatic recognition that such joint ownership recognizes the theoretically equal contributions of both spouses to the creation and operation of the family unit, a basic component of civil society.[7] The countervailing majority view in most U.S. states, as well as federal law, which is based on traditional American family values and gender roles, is that marriage is a sacred compact in which a man assumes a "deeply rooted" moral obligation to support his wife and child, whereas community property, by the same token, essentially reduces marriage to an "amoral business relationship".[8]

Because community property law affects the property of all married persons in the states in which it is in effect, it can have substantial consequences upon dissolution of the marriage from the perspective of the spouse forced to share a valuable asset that he or she thought was separate property. One of the most spectacular examples of this in recent memory was the 2011 Los Angeles Dodgers ownership dispute, in which Frank McCourt paid his ex-wife Jamie McCourt about $130 million to avoid a trial over whether the Los Angeles Dodgers were actually community property after the trial court ruled that the McCourts' prenuptial agreement was invalid.[12] Indeed, one sign of community property's importance is that the states of California, Idaho, Louisiana, and Texas have made it a mandatory subject on their bar examinations, so that all lawyers in those states will be able to educate their clients appropriately.[citation needed]

Often a new couple acquires a family residence. If the marriage terminates in subsequent years, there can be difficult community property problems to solve. For instance, often there is a contribution of separate property; or legal title may be held in the name of one party and not the other. There may also have been an inheritance or substantial gift from the family of one of the spouses during the marriage, whose proceeds were used to buy a property or pay down a mortgage. Case law and applicable formulas vary among community property jurisdictions to apply to these and many other situations, to determine and divide community and separate property interest in such a residence and other property.

Community property issues often arise in divorce proceedings and disputes after the death of one spouse. These disputes can often be avoided by proper estate planning during the spouses' joint lifetime. This may or may not involve probate proceedings. Property acquired before marriage is separate and belongs to the spouse who acquired it. Property acquired during marriage is presumed to belong to the community estate except if acquired by inheritance or gift, or by exchange for other separate property. This definition leads to numerous issues that can be difficult to ascertain. For instance, where a spouse owns a business when marrying, it is clearly separate at that time. But if the business grows during the marriage, then what of the additional property acquired during marriage? Do they not result from labor of the spouses? Were some of the funds that were used to pay for the property community funds while a portion of the funds were separate property?

Options are also difficult to ascertain. A stock option is a right to purchase shares of a company at a fixed price. Companies with growth potential sometimes award stock options as compensation to employees, during times when there is not enough money to pay a suitable salary. By accepting a stock option for compensation, an employee invests his or her own trust in the belief that he or she will help make the company acquire a higher value. Thereafter, the employee works and contributes value to the company. If the company later acquires a higher share valuation, then the employee may "cash in" his options by selling them at the fair market value. The employee's trust in this future value motivates his work without immediate compensation. That effort has value. If the marriage is terminated before the shares are cashed in, then the parties must decide how to apportion the community property portion of the options. This can be difficult. Case law precedents are not yet available for all situations involving stock options.

"all real or personal property, wherever situated, acquired before or after the operative

date of this code in any of the following ways:

(a) By either spouse while domiciled elsewhere which would have been community property if the spouse who acquired the property had been domiciled in this state at the time of its acquisition.

(b) In exchange for real or personal property, wherever situated, which would have been community property if the spouse who acquired

the property so exchanged had been domiciled in this state at the time of its acquisition.[13]