Companions of William the Conqueror

From Infogalactic: the planetary knowledge core
Jump to: navigation, search
File:DukeWilliamAtHastings.jpg
Companions of the Conqueror fighting at Hastings, as depicted in the Bayeux Tapestry. The Duke is on the right, and shows his face to encourage his followers. Legend above: Hic Est Dux Wilel(mus) ("Here is Duke William.") At the left is Bishop Odo. Legend above: Hic Odo Eps (Episcopus) Baculu(m) Tenens, "Here (is) Odo the Bishop holding a club" (see detail below). To the far right, holding a standard, is Eustace, Count of Boulogne (see detail below), with legend above, in upper margin: E[...]TIUS, standing for Eustatius, a Latinised version of "Eustace."[1] The figure is said by others to be Turstin FitzRolf, said by Orderic Vitalis to have carried the Norman standard: Turstinus filius Rollonis vexillum Normannorum portavit, "Turstin son of Rollo carried the standard of the Normans," The Tapestry however depicts it as the Papal Banner, a cross, granted to the Duke by Pope Alexander II to signify papal approval of the Conquest of England.

William the Conqueror had men of diverse standing and origins under his command at the Battle of Hastings in 1066, along with others completing his Norman conquest of England until after the Harrying of the North and before the Anarchy.

The term "Companions of the Conqueror" in the widest sense signifies those who planned, organised and joined with William the Conqueror, Duke of Normandy, in the great adventure which was the Norman Conquest of England (1066–1071). The term is however more narrowly defined as those nobles who actually fought with Duke William in the Battle of Hastings.[2] This article is concerned with the latter narrow definition. 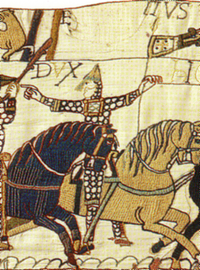 This knight depicted in the Bayeux Tapestry (detail of above) appears below the marginal legend E[...]tius, a Latinised version of Eustace. He has therefore been identified as Eustace, Count of Boulogne.[3] His finger pointing to Duke William seems to depict his urging the Duke to retreat, as the account in William of Poitiers relates. However, others state the figure to be Turstin FitzRolf, due to its carrying of a standard depicting a cross, apparently the Papal Banner. Turstin was described as having carried the "Standard of the Normans," by Orderic Vitalis.

Many ancient English families of Norman origin have claimed amongst their ancestors a participant at the Battle of Hastings as a matter of great pride giving them legitimacy in the higher echelons of the British aristocracy. The large majority of these claims are based on legend and cannot be proven by historical evidence.

Many hundreds of Norman, Breton, Flemish and other nobles of varying degrees certainly fought with the Duke at Hastings, yet the fact remains that the names of only 15 of these are recorded in contemporary historical sources considered to be unimpeachable.[4] This very select group is therefore known as the "Proven Companions," [5] as distinct from the several hundred "Likely," "Probable" or "Possible" Companions. Many lists and "rolls" of so-called Companions have been drawn up over the ages, and continue so to be, yet the three unimpeachable sources remain as follows:

File:OdoBayeux.jpg
Odo, Bishop of Bayeux, fighting at Hastings, holding a club. Legend above: Hic Odo Eps (Episcopus) Baculu(m) Tenens Confortat Pueros, "Here Odo the Bishop holding a club gives strength to the boys." The club may reflect his clerical status which might have precluded the shedding of blood by sword,[6] yet in the same scene Duke William himself also holds a club (Bayeux Tapestry)

The following three sources constitute the only generally accepted reliable contemporary evidence which names participants at the Battle of Hastings. Between all three sources only 15 names result.[7]

These three sources are unfortunately manifestly inadequate, as all are primarily from a Norman perspective. William of Poitiers, chamberlain to Duke William and a trained knight, who provides the most detail, was absent in France during the battle, and betrays severe prejudices in respect of Breton culture and their role at Hastings. Both William and Orderic state that the Bretons were a major component of the battle array, but neither names any of the Bretons present.

(The order of listing is that given in the respective sources)

"A certain Norman, Robert, son of Roger of Beaumont, being nephew and heir to Henry, Count of Meulan, through Henry's sister Adeline, found himself that day in battle for the first time. He was as yet but a young man and he performed feats of valour worthy of perpetual remembrance. At the head of a troop which he commanded on the right wing he attacked with the utmost bravery and success."[9]

"With a harsh voice he (Duke William) called to Eustace of Boulogne, who with 50 knights was turning in flight and was about to give the signal for retreat. This man came up to the Duke and said in his ear that he ought to retire since he would court death if he went forward. But at the very moment when he uttered the words Eustace was struck between the shoulders with such force that blood gushed out from his mouth and nose and half dead he only made his escape with the aid of his followers."[10]

"There were present in this battle: Eustace, Count of Boulogne; William, son of Richard, Count of Evreux; Geoffrey, son of Rotrou, Count of Mortagne; William FitzOsbern; Haimo, Vicomte of Thouars; Walter Giffard; Hugh of Montfort-sur-Risle; Rodulf of Tosny; Hugh of Grantmesnil; William of Warenne, and many other most renowned warriors whose names are worthy to be commemorated in histories among the bravest soldiers of all time."[11]

"His (King Harold's) corpse was brought into the Duke's camp and William gave it for burial to William, surnamed Malet, and not to Harold's mother, who offered for the body of her beloved son its weight in gold."[12]

These five were agreed upon by both David C. Douglas and Geoffrey H. White and are from the Complete Peerage XII-1, Appendix L.

Since the time of these lists, J. F. A. Mason in the English Historical Review adds one additional name:

Sources for this article