Company B, 113th Regiment, in American Expeditionary Forces in France, 1919

A company is a military unit, typically consisting of 80–250 soldiers and usually commanded by a major or a captain. Most companies are formed of three to six platoons, although the exact number may vary by country, unit type, and structure. Several companies are grouped to form a battalion or regiment, the latter of which is sometimes formed by several battalions.

Certain sub-units were raised as independent companies that reported to no higher unit headquarters.[citation needed]

The modern military unit “company” became popularized during the reorganization of the Swedish Army in 1631 under King Gustav II Adolph. For administrative purposes, the infantry was divided into companies consisting of 150 men, grouped into regiments of eight companies. Tactically, the infantry companies were organized into "battalions" and grouped with cavalry troops and artillery batteries to form “brigades”.

From ancient times, some armies have commonly used a base administrative and tactical unit of around 100 men. (Perhaps the most well-known is the Roman century, originally intended as a 100-man unit, but later ranging from about 60-80 men, depending on the time period.) An organization based on the decimal number system (i.e., by tens, hundreds, thousands, and ten-thousands) might seem intuitive to most, if not also highly logical, based on the common anatomical counting device created by using the ten digits of the human hands in numbering objects, animals, people, etc. Therefore, to the Romans, for example, a unit of 100 men seemed sufficiently large enough to efficiently facilitate organizing a large body of men numbering into the several thousands, yet small enough that one man could reasonably expect to command it as a cohesive unit by using his voice and physical presence, supplemented by musical notes (e.g., drum beats, bugle or trumpet blasts, etc.) and visual cues (e.g., colors, standards, guidons, etc.).

Furthermore, recent studies have indicated that humans are best able to maintain stable relationships in a cohesive group numbering between 100-250 members, with 150 members being the common number (see Dunbar’s number). Again, a military unit on the order of no more than 100 members, and perhaps ideally fewer, would perhaps present the greatest efficiency as well as effectiveness of control, on a battlefield where the stress, danger, fear, noise, confusion, and the general condition known as the “fog of war” would present the greatest challenge to an officer to command a group of men engaged in mortal combat. Indeed, until the latter half of the 19th century, when infantry troops still routinely fought in close-order, marching and firing shoulder-to-shoulder in lines facing the enemy, the company remained at around 100, or fewer, men.

The advent of accurate, long-range rifle fire, repeating rifles, and machine guns necessitated highly dispersed combat formations. This reality, coupled with the advent of radio communication, permitted relatively small numbers of men to have much greater firepower and combat effectiveness than previously possible. Companies, however, continue to remain within the general range of 100-250 members, perhaps validating the premise that men fight best (as well as live, work, socialize, play, etc.) in organizations of around 150 members, more or less.

Rifle companies consist of three platoons and a company headquarters.

Company-sized organisations in units with a horse-mounted heritage, such as Household Cavalry, Royal Armoured Corps, Royal Engineers, Royal Corps of Signals, Army Air Corps, Special Air Service, Honourable Artillery Company and Royal Logistic Corps, use the term squadron instead of company, and in the Royal Artillery they are called batteries. Until after the Second World War, the Royal Engineers and Royal Signals had both squadrons and companies depending on whether the units were supporting mounted or foot formations.

The British Army infantry normally identifies its rifle companies by letter (usually, but not always, A, B and C) within a battalion, usually with the addition of a headquarters company and a support/heavy weapons company. Some units name their companies after regimental battle honours; this is commonly the case for composite units, for example the London Regiment with its Somme, Messines and Cambrai companies. The foot guards regiments use traditional names for some of their companies, for example Queen's Company, Left Flank, Prince of Wales's Company etc.

Royal Marines companies are designated by a letter that is unique across the corps, not just within their command. The Intelligence Corps, Royal Army Medical Corps, Royal Military Police and Royal Electrical and Mechanical Engineers all have companies uniquely numbered across their corps.

British companies are usually commanded by a major, the officer commanding (OC), with a captain or senior lieutenant as second-in-command (2i/c). The company headquarters also includes a company sergeant major (CSM) normally holding the rank of WO2 and a company quartermaster sergeant (CQMS) of colour sergeant rank, the two most senior soldiers in the company.

The Honourable Artillery Company is in fact a regiment, not a company, in terms of organisation and size.

Canadian Army organisation is modelled after the British. However, a Canadian infantry battalion consists of three or four rifle companies identified by letter (A Company, B Company, etc.), a Combat Support Company, and an Administration Support Company. A notable exception is The Royal Canadian Regiment, which names its companies sequentially throughout the regiment from the Duke of Edinburgh's Company (instead of A Company) in the 1st Battalion to T Company in the 4th Battalion. Many regiments name their companies after battle honours or former units that make up the current regiment, for example:

As in the British Army, company sized units with a mounted heritage use the term squadron, and in the artillery they are called batteries. 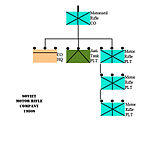 Prior to the late 1980s, a Soviet tank company consisted of a company headquarters and three tank platoons with T-64, T-72 or T-80 tanks for a total of 39 personnel and 13 tanks; companies using the older T-54, T-55 or T-62s tanks had 10 or 13 additional enlisted personnel. However, forces in Eastern Europe began to standardize tank companies at 10 tanks, with three tanks in each platoon instead of four.[2][3]

From the late 1700s up until the late 1800s, a US infantry company consisted of a small company headquarters, commanded by a captain and assisted by a first sergeant (and later an executive officer), and two or (later) three identical platoons led by lieutenants. In 1775, a Continental Army Infantry Company was authorized with one captain, two lieutenants (as platoon leaders), a company first sergeant, four sergeants (section leaders with two to a platoon), four corporals (squad leaders with two to a platoon), a musician, and 68 privates.

The company was an administrative and tactical unit seldom employed in other than as a massed formation. The standard procedure, once the company had marched into its position in the line of battle, was for the company to form facing the enemy as two ranks, by platoon, one behind the other. The commanding officer (a captain), and the one to three lieutenants, serving as platoon leaders and the executive officer (again depending upon the time period) would direct the fighting, leading from the front in the attack and on the flanks in the defense (the executive officer and the first sergeant were normally positioned behind the battle line so as to assist the company commander in overseeing the company and managing the rear (company trains, casualties, enemy prisoners, non-combatants, deserters, etc.). The musician remained with the commanding officer to relay orders by sound (i.e., music) and served as an orderly when not playing his instrument. The sergeants, acted as "file closers", working the line by putting men forward to replace casualties in the front rank, encouraging men to fire, reload, move forward, etc. and if need be, physically assisting or restraining men who refused to move forward or attempted to flee. The corporals physically led by example (much like modern fire team leaders) by taking their place in the line with their privates and fighting alongside them.

Cavalry companies (not officially re-designated as “troops” until 1883) had a similar organization to the infantry, but with fewer men, companies rarely exceeding around 70 men. In the Field Artillery, the company-equivalent unit is designated as a “battery” and historically consisted of a battery headquarters and two or three gun platoons, each with two gun sections. At full authorized strength, a typical battery of six gun sections would consist of approximately 100 officers and enlisted men. 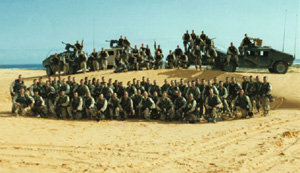 Companies that are not separate from their parent battalion are identified by letter—for example, "Company A, 1st Battalion, 15th Infantry Regiment". This would commonly be abbreviated as "A/1-15 INF" in writing, but not in speaking. The dash in "1-15" indicates that the 15th Infantry Regiment is a historical designation only, there is no organizational unit with that name. Companies normally do not have their own overhead, but share the overhead of the parent organization. When the regimental headquarters does exist as a separate echelon of command (e.g., the 75th Ranger Regiment, the 11th Armored Cavalry Regiment, and the 1st Marine Regiment), as virtually all U.S. Army regiments did until after the Korean War, a slash separates the battalion/squadron number from the regimental number (i.e., B/2/75 Ranger, C/3/11 ACR, E/2/1 Marines).

Although not official designations, the letters are often pronounced in "GI slang" using the NATO phonetic alphabet or, before that, the Joint Army/Navy Phonetic Alphabet, resulting in names such as "Bravo Company" and "Echo Company" (formerly "Baker" and "Easy" companies, respectively). Companies with a separate table of organization and equipment (TO&E) are identified by a number, and are able to operate completely independently from any other unit's support. Company-sized units that are organized under a table of distribution and allowance (TDA) are identified with a name or number.

Company-sized units usually consist of four to six platoons each led by a lieutenant, although there are examples of combat service and combat service support companies that have seven or more platoons. For example, a transportation terminal service company normally has two ship platoons, two shore platoons, one documentation platoon, one maintenance platoon, and the headquarters platoon.

While companies are typically commanded by captains, some companies which have some special operational capacity that requires them to be commanded by an officer with greater command authority and more experience are commanded by majors, and have platoons commanded by captains. Examples of this arrangement include aviation platoons, military intelligence companies, military police companies, and special forces companies. A captain reports to his commander, usually the battalion commander (a lieutenant colonel). However, there are some administrative and other duties at battalion level and larger (brigade or division) that are also handled by captains, for example the S-1, S-2, & S-4 officers of a battalion (S-3 is a major), or some assistant staff positions in the G shops at division.

A weapons company has in place of the three rifle platoons, an 81 mm mortar platoon, an anti-armor platoon, and a heavy machine gun platoon.

USMC tank and LAR companies are organized similarly to US Army tank and mechanized infantry companies, with the three line platoons consisting of four tanks or LAVs each, and the company command element containing two tanks or LAVs.

AAV companies have three platoons containing four sections of three AAVs each, for a total of 12 AAVs per platoon, and a headquarters section of three AAVs. The company also includes both command and recovery variants of the AAV, giving the company a grand total of approximately 42-45 AAVs.

Some companies were well enough known that they have been identified with their company letter. Examples include: