Company of Cutlers in Hallamshire 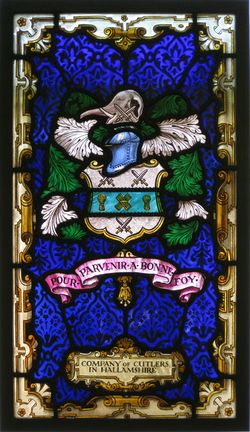 Arms and Motto on Stained Glass Window in Cutlers Hall

The Company of Cutlers in Hallamshire is a trade guild of metalworkers based in Sheffield, England. It was incorporated in 1624[1] by an Act of Parliament. The head is called the Master Cutler. Its motto is Pour Y Parvenir a Bonne Foi (To Succeed through Honest Endeavour).

In the original act of Parliament, the company was given jurisdiction over:

"all persons using to make Knives, Blades, Scissers, Sheeres, Sickles, Cutlery wares and all other wares and manufacture made or wrought of yron and steele, dwelling or inhabiting within the said Lordship and Liberty of Hallamshire, or within six miles compasse of the same".[2] 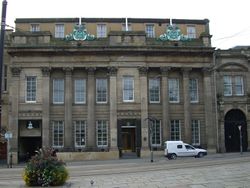 This was expanded to include other trades by later acts, most notably steelmakers in 1860. In the same year the Company was given the right to veto any proposed name of a limited company anywhere in the United Kingdom which contains the word "Sheffield".[3] They also supply marks to approved cutlers and promote Sheffield steelware.

The company has been based at Cutlers' Hall (opposite the cathedral on Church Street) since 1638. The current hall is the third to have been built on the site. The second was built in 1725 and the third in 1832.[4] It was extended in 1867 and 1888. It is now a Grade II* listed building.[5] It is used for formal functions and award ceremonies for local businesses.

Members of the company are called freemen and currently number 447. The Master Cutler is elected each year from the freemen within the company. He or she also has 2 Wardens, 6 Searchers and 24 Assistants.

The Master Cutler for 2011–12 was Pamela Liversidge, the first woman to hold this position.[6]