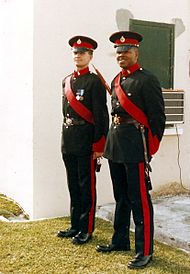 Two Bermuda Regiment warrant officers, class two. A Territorial Army company has two WO2s. On the left is a permanent staff instructor. On the right with a pace-stick, is a company sergeant major.

The company sergeant major (CSM) is the senior non-commissioned soldier of a company in the armies of many Commonwealth countries, responsible for administration, standards and discipline. In combat, his prime responsibility is the supply of ammunition to the company. He also oversees the distribution of other supplies, such as water or food, although that responsibility is mainly that of the company quartermaster sergeant (CQMS), and evacuating the wounded and collecting prisoners of war.[citation needed]

For military units of the same level as a company, the equivalent may be squadron sergeant major (SSM) or battery sergeant major (BSM). In the Household Cavalry, squadron corporal major (SCM) is the equivalent. First sergeant and kompaniefeldwebel (formerly hauptfeldwebel in the Wehrmacht and Nationale Volksarmee) are the United States Army and German Heer equivalents respectively.

In the Singapore Armed Forces, the CSM appointment is usually held by a staff sergeant, master sergeant (the usual rank for a CSM of a non-HQ company)[dubious – discuss] or second warrant officer (the usual rank for a CSM of a battalion HQ company). He may be addressed as "CSM" by superiors, and as "Sergeant Major" (for a staff sergeant or master sergeant) or "Sir" (for a second warrant officer) by subordinates. The CSM is often respectfully addressed by all as "Encik", Malay for "Mister", but the permission for junior enlisted men to do so should not be taken for granted.

Training schools sometimes refer to companies as "wings"; instead of a CSM, the wing has a wing sergeant major. In the case of the Officer Cadet School, WSMs are second or first warrant officers, likely due to the greater experience required for the appointment.

The CSM is the senior specialist in the company. He is in charge of the welfare and discipline of the specialists and enlisted men within, and usually has the company commander's ear. Drill and ceremonies is the CSM's responsibility. He supervises the instruction of drill by the platoon sergeants, and will conduct company rehearsals for parades prior to actual parade rehearsals. On the parade square, the CSM carries a black pace stick.

As an experienced senior specialist, the CSM is expected to be an expert in the weapons and equipment employed by the company, and will assist in instruction where necessary. During exercises or operations, the CSM, aided by the company quartermaster sergeant and company medic, is in charge of organizing the company's logistics, manpower, and medical treatment and evacuation. If necessary, he can be tasked to lead a detachment composed of recoilless rifles and machine guns (known in Singapore military doctrine as a "company block force"), to protect the rifle company from flanking attacks by enemy light armoured vehicles along a contested axis.

In the United Kingdom, CSM is an appointment held by warrant officers class 2 in the British Army and Royal Marines (and previously by quartermaster sergeants in the Royal Marines.[citation needed])[1]

A CSM, BSM or SSM is generally addressed as "Sir" or "Ma'am" by subordinates, or "Sergeant Major". However, a cavalry SSM is often addressed as "Mr (surname)" by officers, and as "Mr (surname), Sir" by his subordinates, with the salutation "Sergeant Major" being reserved for staff sergeants. Typically for the British Army, protocol can vary widely between units, creating a minefield for outsiders, new recruits, and soldiers serving outside their parent regiments.