Compatible Discrete 4 (CD-4) or Quadradisc (not to be confused with compact disc) was introduced in May 1972 as a discrete quadraphonic system created by JVC and RCA in 1971.[1] Record companies who adopted this format include Arista, Atlantic, Capricorn, Elektra, Fantasy, JVC, Nonesuch, A & M, Reprise and Warner.[2]

This was the only fully discrete (all channels recorded separately) quadraphonic phonograph record system to gain major industry acceptance.

CD-4 was responsible for major improvements in phonograph technology including better compliance, lower distortion levels, pick-up cartridges with a significantly higher frequency range, and new record compounds such as Q-540, which were highly anti-static. 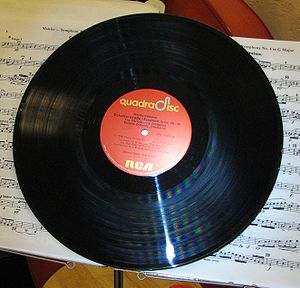 An RCA Quadradisc recording. The color fringes around the reflections are caused by the ultrasonic signal that contains the difference information used to separate the four channels.

These audio signals were modulated onto the carriers using a special FM-PM-SSBFM (frequency modulation-phase modulation-single sideband frequency modulation) technique. This created an extended carrier frequency range from 18 kHz to 45 kHz for the left and right channels. The algebraic addition and subtraction of the sum and difference signals would then yield compatible and discrete quadraphonic playback.

There was also a similar FM radio system called Quadracast. But CD-4 (and quadraphonic audio in general) failed due to late U.S. Federal Communications Commission approval of FM quadraphonic broadcasting, the improvements CD-4 engendered spilled over into, and substantially improved, the production of conventional stereo LP records.